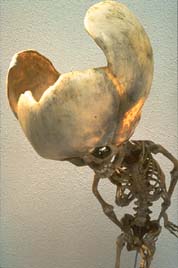 The monstrous is unsettling because it appears to belong nowhere but its own boundless category. Like a lobster at a kosher meal, it always exemplifies chaos. Reduced to curiosities, the bearded lady, the piebald child, and the dwarf are thrust into an impossible genus: extraordinem—containing everything from fingered lemons to bogus mermaids.

Peter the Great of Russia's Kunstkammer claimed four human prodigies including a dwarf so prized that when he died Peter had him stuffed and placed on view along with all the other meraviglie, including his defunct footman's seven foot skeleton, topped by a skull that, mysteriously, was not his own. The seventeenth century dwarf Sebastiano Biavati was the curator of the cabinet in which he was on display—a species of genteel house arrest—and the only thing alive in a collection of tusks, dead turtles, corals and curious shells. Writes Purcell:

We always drive the monster out—to live beyond geographical boundaries of the known world, to be set out, figuratively upon the water as on a ship of fools, to be ostracized on the street, treated as insane, or as a singular being who truly has no group at all and who is forced to live like the Minotaur, Grendel, or Caliban—in a labyrinth, on the edge of town, or at the far end of the island.

If the monster is made to live in banishment, his place of origin too, is that of exile: "Note that at the furthest reaches of the world often occur new marvels and wonders," wrote the fourteenth century author of the Polychronicon, "as though Nature plays with greater freedom secretly at the edges of the world than she does openly and nearer us in the middle of it."

At the end of the eighteenth century, the French natural historian Buffon, eager to calculate "appropriate" human size, decided that the average height of a man was five feet, a giant seven, and a dwarf three. And if he conceded that the sizes of giants and dwarfs are variable, he was certain the ideal was constant at five. One cannot help but think of Dean Swift's vision of shrinking and expanding humanity, and one need not be a dwarf to sympathize with Gulliver's emblematic impotency and infantilization in Brobdingnag, nor to be incensed by Purcell's historical examples of sentient beings reduced to toys and the slavish objects of
erotic games—such as the tiny cripples sold for pleasure in the specialized markets of Rome, and Josef Boruwlaski (1739-1837), admired by aristocrats for his wise and brilliant conversation, who suffered the Swiftian indignity of being dandled on the laps of great ladies. I imagine Mr. Boruwlaski's famous "fiery eyes" burned very darkly indeed at such moments.

"People," Purcell reminds us in her extraordinary book—a book inspired by the exhibit she curated for the Getty in 1994—"struggle to redefine their territories in order to better determine the 'center' of the world and to declare who should occupy it." Purcell's intention
is not merely to offer a glimpse of the world's "fantastic edges" (although her gorgeous photographs demonstrate that no one behind a camera today 'sees' those edges as she does) but to remind us that the informed heart encompasses all edges, imagined and unimaginable, known, unknown and knowable. The world is not threatened nor diminished but instead made richer by such marvelous beings as Mary Sabina, the astonishingly beautiful "Piebald Black Child" (born in 1736) whose portraits acquire an emblematic potency not because of her exotic environs, her skin so very black, so very white, but because the white mark on her black brow is in the shape of a dove in flight. Like the "signifying monkey" of the East Purcell elsewhere describes, who delivers and interprets sacred messages, Mary Sabina is "full of signifying ways." And it is no accident that having offered us this vision of transcendence Purcell next evokes "black catching" in Tasmania (and the extinction of an entire human group) and quotes both Louis Agassiz and Anthony Trollope, whose racism is all the more appalling in the context of a book in which the boundaries of the human have been so usefully, so graciously extended.

Life can be monstrous because it is born of and ends in chaos, but moral and existential dilemmas are not solved (and are often aggravated) by the gathering and classifying of things. "Implied in the institutional hoarding of dead things," Purcell writes, evoking in this reader the drugged denizens of our mental institutions, "is a shoring up against mortality." In the Western world, personal pride has long been confused with ownership. And ownership, Purcell demonstrates, is always political. "Both the impulse and the achievement may be termed as monstrous."

Rosamond Purcell's thoughtful study of anomalies closes with a picture of a human skeleton with its face in a book. We are reminded that even as the world totters towards the twenty-first century, the pursuit of forbidden knowledge is persistently perceived as heresy.
Evocative of the wonder rooms and magic lantern shows of another age, Purcell's own imaginative act of subversion proposes we look closely at the mirror's other side. "In between the monstrous and ourselves," Purcell writes, "we have constructed many walls . . . Through the centuries Western scholars have cited hairiness, darkness, smallness, imperfect rational skills as justification for questioning the eligibility of those possessing these traits for membership in the human race . . . The issue in the study of anomalies is always one of classification--of perspective, scale, and the deep, inherited 'misseeing' of the anomalous fictional creature and the genuine anomalous human being, which goes on and on."

I wish to end this brief review with a reference to Jennifer Miller, a contemporary "Bearded Lady" and a New Yorker who refuses to be victimized by her condition and who calls herself a "transgressive performer."

"I live in a very liminal place," she says. "It is a lovely place. In the theater it's when the lights go out and before the performance begins."

This is what Rosamond Purcell proposes: that when the lights go on and the "special case" appears before us, we dare share that liminal space and embrace the marvelous diversity of what the great dreamer of monstrosity, Jorge Luis Borges, called: