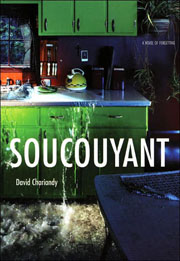 Subtitled “a novel of forgetting,” David Chariandy’s first book is also, of course, a novel of remembering. We can’t face one without facing the other. An okay version of Soucouyant would have lingered on the book’s most obvious example of this: the narrator’s mother’s early onset dementia. But Chariandy layers his story, looking at issues of race and punching up the text with descriptions so delicate and perfect that readers may actually find themselves remembering moments from their own lives.

Long known by neighbors as the “wandering lady,” the narrator’s mother, Adele, relieves herself in potted plants and others’ inflatable swimming pools. She forgets her two children’s names and ages, and she eats sweetened lemons, saying they taste like lightning and that the bag of sugar is broken so someone must call an electrician. Late in her illness, Adele prepares a dish that requires flour and olives on the floor, egg yolks on a baking sheet, and a tuna fish can in the blender: “A recipe has slipped a few times in Mother’s head. Becoming sweet, then savory. A dessert, then a main course. Cumin sands and peppermint air.” Her memory loss is dizzying in its creative extent, but for every loss, there’s an inexplicable gain, as she remembers all the varieties of mangoes that exist, traditional medicines and their uses, her home country in the Caribbean.

The narrator’s African- and South Asian–Caribbean parents are immigrants to Canada, and their skin color is generally unwelcome in the neighborhood where they settle. They forget but must pretend to remember when and how to celebrate new holidays, like April Fool’s Day. The reader senses a particular urgency when Adele thinks she has forgotten about her son’s school professional-development day—to her judgmental white neighbors, her forgetfulness could reflect not only on her mental state but also on her race. The narrator recounts other stories tied to this theme: his father eating horseradish by the forkful because he didn’t know what it was and didn’t want to give the disapproving white waiter the satisfaction of being right; his mother and her black friend accidentally ending up on the border without papers; the violation their first landlord committed against their home and property. In a small side narrative, an immigrant neighbor forgets the struggles her family has faced due to prejudice and remembers only that she is “better” than the narrator’s family.

Amazingly constructed details cut through it all. An overturned milk carton is “pattering white” on the floor; the narrator opens an old tin to a “suck of air and an old smell”; a grocery bag is set down, creating a “slump” of vegetables. The narrator smells a greasy fingerprint on an old library book and his typical after-school snack of oranges in the whirl of his childhood globe. Even things a reader may never have seen are described with such truth that they magically become familiar: a smooshed caterpillar is a “slimy patch of Velcro” and the recovered body of a person drowned in a lake of pitch is like a “teabag dripping juices.”

At one point, the narrator checks on his mother in the middle of the night. She’s screaming, which disorients him. He writes, “I don’t know how long the screaming continues before I’m able to find myself again. My image in a black window, some young man stooping over her.” The haunting story Chariandy tells may not be everyone’s, but through his skillful writing, all readers will see something of themselves reflected back.