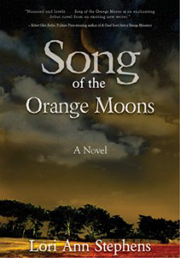 The mark of a well-written book is layers: “It sounded good, but there was a threat behind her words.” To be clear, after a quotation such as that, Song of the Orange Moons is not a thriller—except in the way that all coming-of-age stories are scary and exhilarating—but there is an intensity behind each of author Lori Ann Stephens’s carefully chosen words that makes this short yet still sprawling history of three females so enjoyable to read.

Three friends, two young and one their grandmother’s age, take turns narrating: Rebecka, the first child born to a stern missionary and a Colombian woman who still practices her people’s religion in secret; Helen, who battles her perceived desirability, the communal lifestyle of her boarding school, and her family’s Judaism by keeping a Journal of Touches; and Adelle, the elderly widow who eventually comes to speak not only for herself but also for Rebecka, Helen, and future members of their “family.”

It’s sweet that Stephens plays obviously with images, such as those of the sun and moon and water and things that make our legs itch, and with colors, orange, black, and violet. It’s downright beautiful when she links her ideas with themes unnamed: The sun and the moon are present in Rebecka’s mother’s arms, which move “mechanically in circles, in arches, as though if she stopped moving, a sadness would cave in all around her” while she obsessively fills the days after her son’s death making “casseroles and empanadas, breads, cakes, flan, and the refrigerator slowly filled each day with unbroken breads and sealed dishes.” Her tic of grief becomes a life-sustaining necessity, nourishing things being also inaccessible. Adelle, too, rolls and kneads dough that she knows won’t turn out: “I never made pastry rolls for the end result.”

There are several ways to portray young characters well, and many more ways to turn every descriptor into a blinking red arrow. Stephens is solidly in the former camp. At one point, Rebecka is “watching a loaf of bread tucked under a thin cloth”; at another, she describes a silence as so deep that “I can hear my nose whistle.” When their aunt says someone else changes her hair color “like a whore changes underwear,” Helen and her siblings giggle not at the first noun, of which they have no understanding, but at the second. Yet with a subtlety that can’t be pinpointed in one stand-alone phrase, Rebecka convinces the reader that she at once believes that the sun sleeps in Helen’s west-backing house and understands that it cannot be so. In such ways, Stephens shows great skill in negotiating Rebecka’s late grade-school age.

Song of the Orange Moons is not a perfect book; more cross-description between the characters, for example, would have been welcome, and because Stephens so clearly takes care in making each phrase matter, the few times she slips stand out. But one of the best compliments a reader can give a writer is to pay this kind of attention. We hear every word Rebecka, Helen, and Adelle are kind enough to give us.