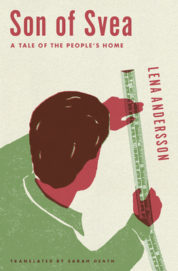 In her fiction, Swedish journalist Lena Andersson repeatedly takes on difficult love. Her first novel, Willful Disregard, (translated by Sarah Death, Other Press, 2016) charted the travails of Ester Nilsson, intellectual and poet, in the throes of sudden, irrational passion. As Esther obsessively analyzes every interaction with the man she adores, the reader grows increasingly uncomfortable, seeing clearly what Ester cannot: that she should stop hoping for any reciprocity. Ester’s next, also ill-conceived passion was then documented in Acts of Infidelity (translated by Saskia Vogel, Other Press, 2019), a novel equally unrelenting and intense. Now, with Son of Svea: A Tale of the People’s Home, Andersson uses her powers of analysis to dissect a more systemic love gone wrong: a middle-aged Swede’s disenchantment with his country as it shifts away from the ideals of Social Democracy.

Born the same year that the Social Democratic Party came to power, Ragnar Johansson has grown up in what he and many might consider a golden age for Sweden. The government’s vision of a middle way between capitalism and socialism, a welfare state known as “folkhemet,” or “the people’s home,” succeeded in lifting the country out of poverty and achieving a smoothly run, state-managed system that provided all citizens with fair and equitable access to housing, education, healthcare, child-care, and more. The system placed a premium on honesty, utility, group effort, mass production, and egalitarianism.

All these are values firmly aligned with Ragnar Johansson’s own personal belief system. The novel begins with his adult daughter Elsa putting him forward for an academic study of folkhemet. When he is rejected as “too ordinary,” he feels pleasantly triumphant; to be a cog in a wheel that runs smoothly for the benefit of all has been his life’s goal. Yet his victory is hollow: He is already aware of being marginalized and irrelevant to the new Sweden developing around him, one that is increasingly international and individualistic in its orientation.

A highly rational man who has had a career teaching woodworking at a high school, Ragnar has always felt at one with his country, admiring its polished bureaucracy as much as his own well-made wooden drawers. As his harmony with the party and its tenets is examined, though, a tone of wistfulness emerges. We learn how Ragnar’s own acceptance of egalitarianism has negated personal ambition, and in this we feel some of the shadows that darken the narrative.

As the Social Democrats’ power erodes, we see Ragnar also confronting changes among his fellow citizens’ viewpoints. There is a breakdown, it seems to him, in the collective spirit, an unnecessary admiration of other cultures, a new, unhelpful sensitivity to the individual. With each interaction that runs counter to his rational view of Swedish social good, he experiences a disorientation and sense of betrayal. These encounters and shifts are subtle, and the dramatic stakes of the novel can seem low. Ragnar is surprised to discover that colleagues, for instance, do not share his sense that immigrants must be distributed throughout the country to avoid their culture penetrating and disturbing Sweden’s status quo. He is shocked to learn that this rational solution might be viewed as xenophobic. Similarly, he is baffled when parents at his daughter Elsa’s ski club reject his mathematically calculated schedule of fair reimbursement for car-rides, preferring their own private, un-systematized transactions.

In depicting Ragnar’s rigid, collective mindset, Andersson succeeds in striking a fine balance between sympathy and satire. While she has clearly organized the novel so that Ragnar and his family can stand in for the “People’s Home” mindset, she never loses her investment in them as real people. Ragnar may be a totem, but we still feel his hopes and sorrows. Andersson depicts his youthful reunion with his girlfriend, for instance, with a charming emphasis on the practical: “It was raining steadily in Stockholm that weekend, but he did not take an umbrella with him as he rushed off to her one-room flat with its cupboard kitchen. All his clothes were left to dry on the radiator for the remainder of the day.”

Cleverly, the generations of the Johansson family represent the very different evolutions of Sweden’s recent history. Ragnar’s mother Svea embodies the old, rural ways governed by frugality; her name itself is the traditional name for Sweden, evoking nineteenth-century flag-waving. Andersson playfully juxtaposes, for instance, Svea’s self-sufficient fruit canning against Ragnar’s preference for the country’s modern, mechanized food production and its factory bread. Ragnar’s children, Erik and Elsa, represent the new, post-folkhemet Sweden, which he disparages. He feels they take for granted the material comforts that the country offers them and follow paths that are trivial and of little value to society.

The novel’s most dramatic section involves Ragnar’s conflict with Elsa. Having supported and promoted her early talent for skiing, he is outraged when he witnesses her own commitment gradually supplanted by an interest in movies and books. Ragnar disparages this as wasteful and bourgeois. As time passes and Elsa steers toward intellectual triumphs, Ragnar comes unmoored. The people who have supported and bought in the smooth-running system that defines Ragnar, have become, Andersson suggests, sadly irrelevant.

Political satire usually works on a more dramatic canvas, and a critical post-mortem of something as close to utopia as “folkhemet” presents a tricky premise, but Son of Svea succeeds through its clarity, precision, sympathy, and charm. Examining Ragnar as he grapples with his beloved country that is slipping away, Andersson’s intellectual acuity drives this quiet narrative with both humor and heartbreak.