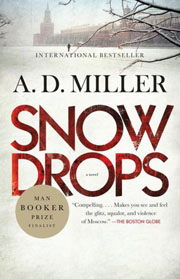 Miller’s debut novel concerns Nick Platt, a rootless Englishman up to his neck in lawless, modern-day Moscow. His hero becomes a victim of a scam and a victim in love and slides into moral meltdown. We read on wondering how, if at all, he will go about extricating himself and whether a stab at redemption is too late.

Miller, previously the Moscow correspondent for The Economist, has travelled all over the former Soviet Union, and his knowledge is in evidence throughout the book. The chaos of gangster-run Moscow has been depicted in countless thrillers over the last couple of decades, butSnowdrops stands out due in part to Miller having experienced the city for himself as a journalist. His professional background means he writes authoritatively on money, the dirty dealing and get-rich-quick ventures of the country’s “black gold rush.” More crucially he writes authentically on every facet of Moscow life, sprinkling the narrative with appropriate jargon: everything from krisha (the protective muscle needed to bully and intimidate and fight your battles to stay ahead) to Russian proverbs, slang, hand gestures, and even different snow types. (The snowdrops of the title refer to corpses hidden by the snow and only coming to light in a thaw.) As a result, the book is elevated above the usual vacuous first-person expat-abroad debuts, with credible detail being a product of insider knowledge.

Of course, detail alone cannot make a flawless work of fiction. Snowdrops’ vivid local color is marginally tarnished by a clutch of wrongheaded descriptions, and seriously marred by its narrator’s actions. In the case of the former, Miller sporadically lets slip ill-fitting collocations: Moscow’s poor wear “bleak trousers”; a station is not ornate but “frilly.” What are intended as clever turns of phrase often end up on the page as cheesy puns: a venal cop has a “cash-hither smile”; Ikea is now apparently as “inevitable in Moscow as death and tax evasion.” And yet when Miller gets it right he hits the mark: the thuggish Cossack is forever “outlined in violence” and a dyed-in-the-wool relic from the past wears “Soviet glasses” and “smelled of cigarettes and Brezhnev.” Miller’s mixed success at illustrating a scene can be encapsulated in his treatment of the simplest of objects and movements. On more than one occasion he has his characters “punch” numbers on intercoms to get through doors—shop-worn phrasing that is a staple of every hackneyed thriller. And yet Miller impresses by informing us that those very doors his characters live behind are axe-proof. With such neat observations, it’s a shame that his hard work is often undone by language that is either outlandish or banal.

Worse is his depiction of Nick as that stock thriller character, the foreigner out of his depth. His clouded judgement and all-too ready acceptance of Masha—a girl who holds him at a distance and keeps herself resolutely unknowable—not to mention his adherence to her scheme, even once he smells a rat, strains at the reader’s reserves of credulity. Nick could be naïve, of course, but Miller renders him downright gullible. It makes for strange reading: here is a book in which the setting comes alive just at the point when we stop believing in the narrator. It doesn’t help that the novel takes the form of a lengthy confession, an unburdening of the soul that Nick is compelled to write to his fiancée before their wedding. The problem with this approach is that it forces Nick to pepper his prose with life-line explanations: “MGU meant Moscow State University, Russia’s version of Oxford, but with bribes to get in”; “Patriarshie Prudy—Patriarch’s Ponds: the Hampstead of Moscow, with more automatic weapons.” The tag-on witticisms are at first enlightening but soon become wearying, and while these reference points are useful for the reader (and, presumably, the fiancée), many are redundant. “‘Poguliaem,’ I said. (Let’s walk.)” proves instructive but “‘Normalno,’ he replied. (Normal.)” is laughably patronizing. Even if his fiancée forgives Nick his egotism and cowardice, one wonders how long she will tolerate his condescension.

As Nick gets carried away with the drawn-out details of his confession, the novel becomes freighted with irrelevancies. We are shown a “snowdrop” at the beginning and so read on to discover its significance to the novel as a whole. Along the way Nick foreshadows his imminent fall from grace by drip-feeding us dark premonitions and dangling suggestive lures: “I hadn’t done anything to be ashamed of, had I? Anything you could hold against me? Not really. Not yet.” The constant reminder that there is more back-story—“Looking back” is a common sentence-starter—after a while grows grating. When will we be propelled forward? But before anything dramatic materializes there is layer upon layer of padding to get through, mostly in the form of endless, meaningless sightseeing. Nick’s mother comes to visit and he shows her around St. Petersburg, but we learn nothing new about the city or the plot; in another side-trip, this time to Odessa (“a sort of cross between Tenerife and Palermo”), Nick does glean something valuable from Masha’s enigmatic life but, frustratingly, lacks the guts to question her and offer us clarity. Both sections, together with the excessive traipsing around the capital, are insightful in their own way, but seldom rise above being superfluous travelogues. Snowdrops is crippled by reportage, feeling in places like the author is determined to cut and paste every Russian experience into the narrative. We yearn for him to cut to the chase, but when he finally does, the punch he tries to pack is too telegraphed to knock us out.

Snowdrops is curious for being a thriller that isn’t thrilling, a slow-burn of a novel that nevertheless urges us to turn the pages. The corpse on the first page helps, but giving credit where it is due, so too does Miller’s prose, punctuated with those little nuggets of Moscow idiom and in-the-know fact. The novel’s inclusion on the 2011 Booker Prize short-list surprised many, prompting the judges to explain that their main criterion was “readability” over literary showmanship. (It is easy to imagine it appealing to the chair of the judging panel, former Director General of MI5 turned thriller writer Stella Rimington.) And Snowdrops is immensely readable. Whether that is a suitable requisite for winning a major literary prize belongs to a different discussion, but Miller deserves praise for the masterful way he has Nick build himself up, realize his own weaknesses, and then knock himself down.

“Depicting his moral decline—which is what the book is ultimately about—through his voice was tough,” Miller told The Guardian. “But I think the hardest part of any extended piece of writing is sustaining the morale of the author.” Snowdrops sounds like a hard-won battle, but for all its flaws we should be grateful that the author could keep his morale up long enough to chart his protagonist’s moral fall.