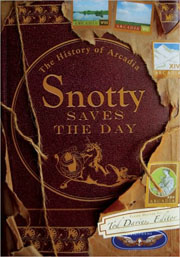 While it is not explicitly aimed at any age group, Snotty Saves the Day is mostly a middle grade adventure fantasy wrapped in a faux academic study. In the foreword, Tod Davies claims to have found the manuscript in the woods with a note from a professor in a country called Arcadia. It is a fairy tale about a rather repulsive little boy named Snotty, with a prologue by one Professor Devindra Vale. The professor’s footnotes accompany the story throughout and give hints of a second story about the cause of Arcadia’s civil war.

Snotty is a twelve-year-old drug dealer and thief who, at the beginning of his story, falls through a hole in the ground into another world. Here, Snotty trades his little finger for a heap of treasure from a man calling himself Aladdin, and subsequently becomes the ruler and Sun God of a society of Giant Garden Gnomes. Snotty goes off with the Gnomes to their stronghold but stays there only a short time before a troop of Teddy Bears break in and spirit him away to join them in fighting the Gnomes.

Things continue on like this. It’s an eclectic universe with no apparent organizing principle, and Snotty himself is a cipher whose character frequently changes. Characters wander in and out of the story, and the prose is often vague. The furniture in the Gnome fort, for example, is all described as “Gnome-sized,” but the book never makes clear how large the Gnomes are. There is also some unfortunate poetry, a ballad one of the Gnomes sings about the book’s climactic battle:

Meanwhile, in the footnotes, Professor Vale points out each “important motif in Arcadian fairy tales” and frequently alludes to an ongoing war in Arcadia. This conflict is driven by an academic rivalry between two groups, called the Neofundamentalists and New Subjectivists, who have differing ideas about the nature of reality. The New Subjectivists believe in the world’s essential unity, while the Neofundamentalists don’t. Professor Vale further asserts that “stories, especially those told to children, hold the greatest secrets of our universe.” This is the book’s most interesting premise, but it’s poorly explained and oddly executed. By the end, Professor Vale argues that Snotty’s story is literally true, and that it fills in a gap in Arcadia’s history. The moral is not that fairy tales carry universal truths, so much as that one fairy tale, in a fictional country, is actually a true story. That’s a rather less important idea than the book claims it has to offer.

The scholarly trappings won’t be interesting for very young readers, and the book may well have too many talking teddy bears for older ones. It’s an interesting concept and a courageous format, but Snotty’s story fails to carry the day.