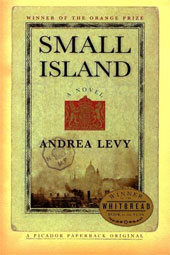 Small Island is the recipient of last year’s Orange Prize as well as the Whitbread Book of the Year Award, two of Great Britain’s highest literary honors—a first time occasion for a work of fiction. I mention this at the start insofar as these distinctions reflect the original achievement found in Andrea Levy’s new novel, as well as its recognizable elements of theme and character. In short, this is a work that succeeds through its balance of a classic British lineage—Jane Austen forward—transformed by the contingent cultural crossings of Britain’s imperial past, a fashionable combination feted by critics and popular readers alike as witnessed by the exuberant reception of recent novels by Zadie Smith and Monica Ali. By seeking to recast the British novel for a multicultural present, Levy consequently shares a common audience and sense of purpose with these two writers, posing the fundamental question of what it means to be British today in a context irreversibly changed by colonialism overseas and its blowback of immigration found arriving on Britain’s shores.

But Small Island is also much more than this. Levy’s novel takes place in the years before, during, and shortly after World War II, with her three main characters—Gilbert Joseph, Hortense Joseph, and Queenie Bligh—addressing such questions of belonging in this setting of global conflict and social upheaval. The fate of her principals can, of course, be situated and read in this distant historical context. However, as with Shirley Hazzard’s novel The Great Fire (2003), which takes place in the aftermath of the Pacific theater of the same war, there is also a sense of inescapable comparison with our contemporary predicaments of war overseas, the after-effects of violence, and coping with world events on an individual, human level. The questions of identity grappled with by Levy’s characters consequently gather a particular poignancy and an unexpected resonance with our post-9/11 present, without the self-conscious theatrics and sentimentality of recent fiction that has tried to address this event directly.

“There was no doubt about it, I was looking forward to this war,” Queenie stridently declares just prior to the London Blitz, her naïve confidence based on her perception of the oncoming war as a solution to her stagnant, unhappy marriage. Her mood quickly changes once bombs start falling, though her statement also encompasses the sentiments held by Gilbert and Hortense Joseph. Gilbert, a Jamaican volunteer in the Royal Air Force, joins the war effort with a clear sense of patriotism, but he finds his loyalty tested by the racism he meets in the service, begging the troubled question of what values he is fighting for. Trained as a schoolteacher, Hortense similarly arrives in postwar London with storybook expectations of the city, only to encounter everyday discrimination amidst its cool, grey atmosphere. The lives of these three intersect in a boarding house run by Queenie, where they all manage to find a sense of safety through each other. This comfort changes climactically near the novel’s end when Bernard, Queenie’s husband, unexpectedly returns from his commission in India, filled with derogatory bile despite his humbling experiences in Britain’s far colony. Though Levy brings her characters to conclusion, her finish is a surprise, with enough unresolved plot elements to suggest a possible sequel.

Levy cleverly handles this expansiveness of time, geography, and character by employing a sequence of chapters that cut back and forth across time, with each consisting of the individual perspective of one person. Part of Levy’s accomplishment is her remarkable ventriloquism; she fully inhabits the separate voices of these characters. Furthermore, the world she conjures forth—from the island idylls of Jamaica, to the military fields of northern England, to the downcast streets of London after the Second World War—is entirely her own. Given its parameters, Small Island will undoubtedly show up on the reading lists of students and scholars engaged in cultural and postcolonial studies. But as proposed earlier, there is a separate context and greater poignancy at work here, likely unintended or expected by the author herself, that deserves a second reading. Levy’s fictional evocation of the wide panoramas and local atmospheres of World War II—with their moments of tension, uncertainty, and, at times, release towards greater self-awareness—reminds us how the past, when skillfully interpreted, can hold lessons for the present.