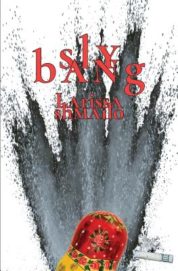 Larissa Shmailo’s Sly Bang is written with tremendous energy and moves at an exhilarating pace, yet it dwells on depraved characters and actions. Almost nobody is nice in this novel about serial killers, mad scientists, FBI agents and evildoers.

The plot centers around Nora, an FBI agent with telepathic and scientifically grounded superpowers, who is hunted by Ouspensky, a scientist, satanist, and Nazi who wants to destroy the world using nuclear colliders. Among Nora’s defenders are Michael, a serial killer, and Andrew and Aubrey, fellow FBI agents who seem to be the only characters without obsessions, perversities, and obscene desires.

Indeed, the book reads like a psychotic episode. People die and come back to life. The line between dream and reality is not entirely clear. Mind-reading is possible. Strange, advanced technologies propel the action at times. Some characters have superhuman abilities: Most of the men have extraordinary strength and beat up a slew of other people to prove it. They can even break their way out of manacles.

And that is where the satire lies. The book, while it portrays horrific actions, makes fun of superhuman male figures and the traditional ideal man. Their activities are so outlandish that readers may find themselves laughing out loud and cheering as Nora outlasts most of them through her grit, pluck, and resilience. As she contemplates being saved by a man, she writes “hey, this damsel in distress thing really turns them on . . . subconscious hostility that they want me to be harmed?” The book takes direct aim at the fantasies of some males, making them so extreme that their absurdity becomes crystal clear.

Sly Bang’s satire on the whole is extreme—it begins with a scene of Nora masturbating under command while being remotely surveilled. She is alone, sleep deprived, and very scared. Serial killers lurk blocks away, pretending to be friends, and attempt to confuse her through remote communications. She needs to fight the depravities of the males, who are lampooned in their aggressiveness and inability to treat Nora straight. And Nora has her own issues. She treats men badly by manipulating their feelings, loving them and leaving them, cheating on them, and so forth. It may be a kind of visceral revenge.

To top it all off, Nora and her “friends”—neither she nor we are entirely sure who is or isn’t on her side—need to save the world from Ouspensky’s attempt to destroy it just for kicks. The comic book element makes war itself seem cartoonishly absurd, driven not by a desire for territory or money or power, but to dominate women in a psycho-sexual manner.

This is a hilarious and horrifying novel. It depicts the worst humanity is capable of, but what keeps Sly Bang from becoming overwhelmed by the depravity it describes is the writerly energy of Shmailo. Wise cracks and madcap scenes burst one after another in a buoyant fashion—so it goes down easy in spite of the horrors it describes.