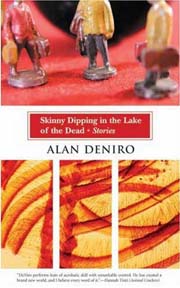 German theologian Rudolf Otto (1869-1937) coined "numinous" to describe "that which is wholly other," the mysterium tremendum et fascinans ("mystery awesome and fascinating") that leads people toward magic, religion, and the like. Alan DeNiro's stories have plenty to do with otherness and abound with awesome, fascinating mysteries. Yet he and Otto (English occultist Kenneth Grant, too, who used "that which is wholly other" to define "evil") harbor fundamentally different agendas.

For Otto, any union between human and numinous entity is both partial and fleeting, even within the high-yield realms of Pentacostalism or Vodoun. Skinny Dipping in the Lake of the Dead's protagonists mostly start half-numinous and, practically begging for epigenesis, become more so—sometimes for good, as in "Cuttlefish." The Genoan street urchin who spends his days killing and dismantling the titular critters does so neither out of hate nor from the scant renumeration he gets from his only friend, a dealer in birds. He hears the thoughts of cuttlefish all over the globe, and merely seeks a little piece and quiet. Problem is, the telepathic contact continues even beyond the grave, seriously threatening his sanity until salvation arrives in the guise of a vampire squid.

By no means are DeNiro's characters always so troubled; for some, the miraculous is second nature. Before her transformation, the trapeze artist of "Fuming Woman" (like the cuttlefish boy, nameless) leaps higher and higher, catching one bar in her teeth, the next with her belly button, the third with a kidney, and the highest with "her slightly ironic, melancholic disposition," all while the circus beneath her is convulsed in a riot that threatens to bring the big top down. DeNiro makes the extraordinary ascent seem like part of her act.

Just as he both de-stigmatizes the wondrous and makes it seem perfectly natural, the author excels in bringing the sinister aspects of mundane existence to the surface. Blundering, overzealous, government functionaries (and their functions) bear the brunt of his wit-and DeNiro is often damn funny-in "The Fourth," when they nearly destroy a neighborhood over three packets of Kool-Aid an innocent husband and father receives in the mail.

DeNiro doesn't pick exclusively on squares, by any means. The title story's targets are the 23rd-century counterparts of today's New Agers and Boomer-style activists, royal pains one and all for the emancipated teens who make up the bulk of Suddenly's population, but especially thorny for the narrator (nameless until story's end) after he falls in love with a girl who's part dolphin. That the author captures the 18-year-old mindset perfectly enough to jog an octegenarian's memory only sweetens the fruits of his imagination. While he hardly lacks for peers—Benjamin Rosenbaum, Aimee Bender, and Small Beer Press publisher Kelly Link stand out—the extent of DeNiro's range and the suppleness of his voice would set him apart even minus the compassion that drives Skinny Dipping. Who could possibly resist a writer whose giants sit in their suburban living room around an XXL Monopoly board, as DeNiro's do in "The Friendly Giants," cheerfully moving massive, custom-designed pieces?