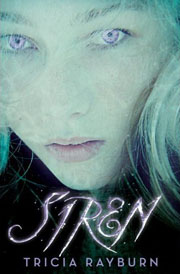 Justine Sands is always ready for adventure—fearless, even. It's one of the qualities her sister Vanessa loves about her. Then Justine turns up dead, drowned in a freak weather event, in “currents so strong, Triton himself, the Greek god of the sea that could turn the waves up and down with one blow into his conch shell, wouldn't have been able to hold his own.” A terrible accident, everyone says. But Vanessa is determined to find out what really happened. She knows something is off, even before she starts hearing her dead sister's voice inside her head.

Siren, Tricia Rayburn's first young adult novel, is a tricky proposition. A realistic story with just a smidgen of fantasy, Siren plays with the suspension of disbelief every reader enters into when she reads a work of fiction. Here, the main character struggles throughout with a suspension of her own disbelief in order to find the truth. So the question becomes, does Vanessa's struggle to understand her world in a different way ring true with the reader? The struggle is a perfect metaphor for coming of age, which is what makes it work so well (and why we see this device so often in YA novels).

Vanessa's investigation starts with Simon and Caleb Carmichael, a fixture of the girls’ summers. Caleb was with Justine just before she died, and now he's disappeared. So Vanessa teams up with Simon to find Caleb, a hunt that proves stranger and more dangerous than either of them expected, changing their easy-going friendship into something deeper. Rayburn is adept at conveying the conflicted emotions Vanessa experiences from this change, especially in the middle of her grief over the loss of Justine.

Like those “meddling kids” in Scooby-Doo, Vanessa and Simon start nosing around town asking people questions they don't want to answer, including a crazy old man who holds the key to part of the mystery. It's a compelling read, as Rayburn's pacing is spot-on, moving between the adventure of the mystery, the excitement of first love, and the grief over a death in the family. The plot thickens deliciously as Rayburn adds layers, expanding the mystery beyond Justine's death into several similar deaths, both recent and historical. She also complicates the mystery of Justine as Vanessa finds out that her sister, who she thought she knew so well, was keeping secrets from her.

One of the most satisfying aspects of Siren is its rich plotting: the story is unpredictable, with no sudden reveal at the end to tie all the pieces together. Instead, there are several points at which the reader's curiosity is satisfied, and even more than one climax; when Simon and Vanessa finally rescue Caleb after a harrowing chase and a battle of wills, we're only halfway through the book. Unfortunately, Rayburn's propulsive plotting only moves forward; the few scenes where she skips time and then tries to reveal what happened by looking back are confusing. Still, Siren is an enjoyable read that leaves us hoping there's more to come.