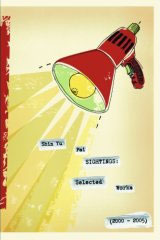 Shin Yu Pai writes a poetry of sensory overload. Beneath a surface tension of typography and ekphrasis, Sightings: Selected Works presents poems about commoditization, communication, sexism, and sex. At times her language skims with channel-surfing quickness, but somehow her postmodernism conveys depth, too, where meanings might battle against each other in any three-word phrase: what does “wage wars over” mean in the poem “It’s All White Meat"?

The grammar is reminiscent of how some Americans have described classical Chinese poetry, with parts of speech in an unsteady juggle. Pai is also an Asian-American poet who has chosen to investigate what Asian means on a cultural, not only racial, level: her first book was a translation of Chinese poetry; she recently edited a selection of Taiwanese poetry for the online journal Fascicle; and the first section ofSightings looks at Japanese Love Hotels. “Hello Kitty” shows both how intimate and fierce her poetry can be, writing about the not so specifically Japanese intersection of sex and capital, an ethos of prostitution no one can escape:

in the altered graphic

as she nurses a digit

The structure of Sightings moves from sex to sexism—particularly heterosexism—in the transition to “Unnecessary Roughness,” the second section of the book. Her play of cultural referents continues, moving from Belle & Sebastian (a poem titled “Stars of Track and Field”) to Nirvana (“Smells Like Teen Spirit”), but the real clash is the confrontation between different kinds of physicality in high school sports. “Wrestlemania,” a poem about Greco-Roman scoring, attests:

you’ve got him
off his feet

flat on
his face but

you want him
flat on

If “Unnecessary Roughness” focuses on the kinds of contact between bodies, the following section, “Concave is the Opposite of Convex (or lines from a Chinese-English phrase book),” looks again at the meaning of Asian-America from a sociolinguistic perspective, with Pai writing the ways in which language keeps people apart instead of bringing us together. Written in play format, no one achieves communication: Scene 1 begins with a short soliloquy from Sam Wong, reciting variations on English phrases, when Wells Fargo and Sam’s assistant enter “to conduct business transaction”:

Wells Fargo: The house was set on fire by an incendiary.
Sam Wong: I will rent the house if you include the water.
Sam’s Assistant: I will attach his furniture if you indemnify me.
Sam Wong: Please tell me what is the name of my landlord?

Problems of commerce may be the unifying factor of all the poems Pai has collected in Sightings; the final section, “Nutritional Feed,” continues in this vein, ingesting the ways in which the foods we consume are inextricable from a larger, consumptive, consumerism. The typography defies quotation, but in poems such as “It Does a Body Good” she reminds readers of lactose intolerance and how the food pyramid was constructed by the agriculture industry, not the nutrition experts. Likewise, “Sonagram” takes the form of standard Nutrition Information labels, rearranging “Packaged Nutritional Facts”: “To Avoid / Obstruction // The Taste / of Rawness · Weighed // Against Feathers.”

For a poet barely over thirty, publishing a Selected Works so early in her career may seem like an overly audacious move. Then again, Sightings is Shin Yu Pai’s fifth publication, and she has two more on the way. Already she seems nearly omnipresent, and this volume serves both to increase her stature and stabilize her course. When a poet’s reach already includes translation, commerce, communication, sex, and visual anthropology, such a publication seems a gracious necessity: Sightings assures us that Shin Yu Pai has been seen.