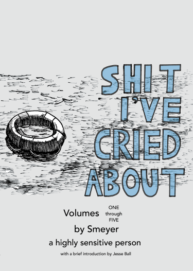 Originally published by the author as a zine from 2016 through 2018, Shit I’ve Cried About is that special kind of micro-press release the world desperately needs. Centering on queer love and offering an outline of the struggle for visibility in a nihilistic culture, this pocket-size volume gives us remembrances and recognitions of the author’s sadness over the span of these years.

In part a chronicle of Smeyer’s life with her partner Andy, Shit I’ve Cried About reads like a roadmap to the moments that give rise to sorrow and tears. Sometimes, the entries are simply internal meditations on her emotional state, stating straight-forwardly “I was nervous,” or “feel like a failure.” At other times, Smeyer presents works of culture that have moved her, such as George Saunders’s Lincoln in the Bardo, or that delightful moment when she takes a page to muse on the undercurrent of female empowerment in the 1994 film Corrina, Corrina.

Notable in a similar vein, Smeyer often mentions performances by the Chicago black lesbian burlesque performer Jenn Freemann, who frequently appears under the name Po’Chop. This recognition serves as a validation of not only the author’s identity, but that of others; when Smeyer writes about attending weddings for two of her best friends a few weeks from one another, she nots “what an important thing ceremony is, and remembering how hard these queer lives can be, and watching your friends find love, and thinking of the people who died so that we might not feel the need to hide.”

Death, of course, is an occasional subject, as is the form of it Smeyer encounters in a powerful moment on the anniversary of the Stonewall Riots, when her girlfriend’s sister bans her from contact with her family. “She wasn’t allowed to see or talk to her nieces ever again,” the author writes, “After 14 years of loving them, they were gone. It felt to her like they had died. She felt more alone than she’d ever felt in her whole life.” She pauses, and at the bottom of this page, offers this touching realization: “And I couldn’t do anything to fix it.”

While Shit I’ve Cried About certainly evokes sorrow—for our society and world, for our lost loves and the devastations of indifferent bigotries, for the struggle not only to be seen but to matter—this slim volume is also full of great joy (Smeyer frequently turns to her beloved feline, Ghostbusters T. Cat, for that steady dose of heartfelt uplift). A brave, thoughtful, and mournfully reflective book, Shit I’ve Cried About doesn’t succumb to myopia but looks beyond the imperfections and discouragements which limit what may blossom in our hearts.