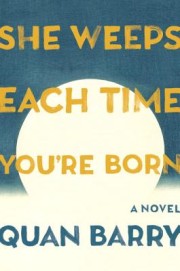 With four books of poetry, a Wallace Stegner Fellowship, some coveted prizes, and a professorship at the University of Wisconsin—Madison decorating her byline, Quan Barry comes to her debut in prose with impressive credentials. The question is, will Barry's novel be held in the same esteem as her celebrated poetry? The bar, after all, is set very high.

The pivotal character in She Weeps Each Time You’re Born is Rabbit, a Vietnamese psychic and medium who is more goddess than human. Like the bodhisattva Quan Yin in the Mahayana Buddhist tradition, Rabbit exists to listen to the cries of souls as they travel through samsara, to hear the "voices of the spectral." She has been "chosen to speak for all of them, tens of hundreds of thousands of millions."

The story of Rabbit’s birth evokes myth as much as magic realism. It's 1972 and American soldiers are bombing the mountains near her grandmother's farm; sick with malaria, Rabbit's teenaged mother dies in childbirth and, as bats and ash fill the sky, her grandmother hides her in a makeshift grave. Now refugees, they flee towards three decades of displacement during which Rabbit will be privy to many sorrowful tales, including those of a woman indentured to a French rubber plantation, a rape victim, murder victims, and victims of war crimes—their stories all dispersed across a 100-year swathe of Vietnamese history. As her country rages in civil war, settles, and attempts to bandage its battle wounds, Rabbit listens.

Like her poetic forebear Sylvia Plath, Barry's forté is realistic, intensely emotional imagery. Her scenes favor the illicit and the messy, with her most shocking passages detailing sickness, miscarriage, teenage sex, abortion, and rape. Of course, such gut- and heart-wrenching vignettes are riveting. But the novel disappoints when such intense imagery is too often reproduced, especially in sluggish stretches of minimal action. For instance, Rabbit is nursed throughout the novel, even at age thirty; there is neither an apparent reason for the adult breastfeeding, nor the lactation of her surrogate mother. Yet more than one section concludes with Rabbit sucking out breast milk, even passing it into her caretaker's mouth. Well-written though they are, such scenes undermine Barry's well-conceived plot and risk letting the novel devolve into a catalog of moments that owe too much to shock value.

Despite this, fans of Quan Barry will surely recognize the poet at her best in this novel. The repeated images of graves, honey, the moon, and dying bodies emitting blue flame, for example, are all carried over from her first poetry book Asylum, as are Barry's abiding interests in Vietnam, motherhood, and violence. She Weeps Each Time You’re Born is ultimately a moving book that rewrites the genre of the war novel into something rich and strange.