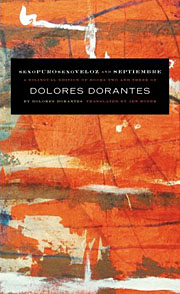 In his “Notes Toward a Nomadic Poetics,” Pierre Joris advocates a poetry that is “always changing, morphing, moving through languages, cultures, terrains, times without stopping.” Poetry, then, becomes a “displaced drifting” that is always in the process of becoming—a poetics that is unsettled and always in flux. Dolores Dorantes’s sexoPUROsexoVELOZ and Septiembre, books two and three of her ongoing project Dolores Dorantes, epitomizes this displaced drifting—a nomadic poetics—that, as she notes in the introduction, is part of “a continuous trajectory.” This trajectory, Dorantes continues, will have no “stopping points” so that “each book might be an ‘I’ in motion.”

By evoking her own name as the title of this work-in-progress, Dorantes collapses the traditional separation between author and text, subject and object, writing and written. She makes of herself a text that is written, fashioned, constructed. This gesture, which at first seems effusive and almost Whitmanesque, is actually diffuse and, at times, self-effacing. Rather than a grandiose vision dominated by a single ego, a lyric “I” at the center of the poem, Dorantes creates a kind of metonymical splintering and displacement throughout both books presented here. The self is, in fact, dislocated along with stable notions of meaning.

One of these dislocations arises as a metonymical construction with the name “Dolores,” whereby the objectified figure of the poet herself, as title of the project, is representative of all Mexican women. (Jen Hofer, in her “Translator’s Note,” suggests that Dorantes makes a similar gesture with the name “Jen” representing women from the U.S.). The “Dolores” metonym is further complicated by examining the actual meaning of the word “dolores” in Spanish. The plural of “dolor,” meaning pain or sorrow, implies that “Dolores” is a figuration for the “overall condition” of Mexican women—one inherently imbued with sorrow and pain. The entire subtext underlying the book involves similar themes that often emerge with an eerie kind of violence:

I offer
my head:

the knife
of your breathing
dazzles

From the title of the first book, sexoPUROsexoVELOZ (PUREsexSWIFTsex) one expects something sensual and erotic, and the poet certainly doesn’t disappoint. This sensuality, however, is often ironically rendered, whereby it resides in language itself, explicitly and self-consciously a text. Sexuality exists, or is re-presented, via the imagery and the often ephemeral descriptions of the body in relation to others or to objects as words (and words as objects). It is as if the physical act, when reproduced through language, becomes something that only ever was imagined. Of course, physical and sexual acts are real, so the effect is one of desolation. She writes:

From the other side
(in the part of me
that doesn’t show) throbs the fog
of our kiss: is that you? You open. You enter

questions from my mouth

Sexuality, like the self, the body and the author—in the spirit of jouissance—is textual. Shadows, fog, reflections, and water are the tropes that sex and love seem best reflected in and through. There exists an ongoing struggle to define what it means to be and what it means to love. This struggle is constant and constantly mobile:

(love
it’s your murmuring) you

The dazzle of that body

Multiple tensions arise, ignite, and then disperse, only to reappear in another version, an ulterior, and often mysterious, incarnation. For instance, in Septiembre Dorantes suggests the soul is the “plank with no handhold // empty / of all sorrows.” And earlier in sexoPUROsexoVELOZ, she couches love (i.e. the “soul’s prostheses,” to borrow—and alter—a metaphor from Hofer), within this intriguing metaphor: “AS IF LOVE / harbored the city / I construct for you.” Although Dorantes seems to reject certain varieties of surrealism—especially what she refers to as contemporary confessional poetry in Mexico that “venerates the creation of image after image with no importance whatsoever given to meaning”—some of her most intriguing, and powerful, gestures are imbued with bizarre oneirism: “We all ran / to pull down the fruits / off that flaming / tree of rubble.” For Dorantes, the poem is a kind of “war,” as she states in her introduction. The war is waged against a certain kind of poetics, a way of being, and perhaps with the very structure of thought. It is a structure that demands investigation, even if the result is a troubling isolation. Or, as the poet herself suggests: