SERPENT OF LIGHT
The Movement of Earth's Kundalini and the Rise of Female Light, 1949–2013
Drunvalo Melchizedek
Weiser Books ($19.95)

BEYOND 2012
A Shaman's Call to Personal Change: and the Transformation of Global  Consciousness
James Endredy
Llewellyn Worldwide (16.95)

Having survived the recent turn of the century without any disastrous end-of-the-world scenarios coming to fruition, and having slogged through the last seven years in a Big Brother-ish, post 9-11 world under the fog of war but still ticking, we may think we’re in the clear for the next hundred years. Well, think again. Another date looms in front of us, one writ long in ancient calendars that bespeaks a prophecy. Fortunately, this prophecy lacks the hell fire and apocalyptic metaphors we’ve all grown accustomed to. According to the Mayan calendar, on December 21, 2012, the world will end—at least the world as we know it—and this is a good thing. With the date only five years away, a slew of books have cropped up to explain why. Three in particular approach the Mayan prophecy of 2012 from unique perspectives that reveal the personal, internal aspect of this “end of the world”: a “child of the sixties” shaman; and a young ex-Catholic eco-activist, and a somewhat cynical New York journalist. Each approaches the impending transformation of personal and collective consciousness with honesty, sincerity, and candor. 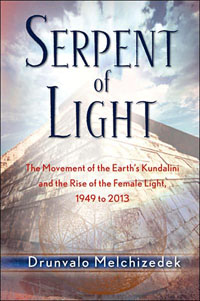 Drunvalo Melchizedek, founder of the Flower of Life Workshops, explains in Serpent of Light that the Earth’s Kundalini has been on the move since the middle of the last century, en route from the Himalayas of Tibet to the Andes of Chile. Along the way, this serpentine energy met some obstacles due to the troubles and blockages in the world, but with the help of ceremonies performed at various ancient, indigenous sites, the Serpent of Light will make its new home in Chile. The Precession of the Equinox takes roughly 26,000 years—which the ancient Sumerian civilization calculated with amazing precision 6,000 years ago. “We have all heard that we are moving into the Age of Aquarius. This is true. On December 21, 2012, the axis of the Earth will be on the edge of this constellation, and, for the first time in 12,920 years, it will also be moving toward the center of the galaxy instead of away from it.” He goes on to point out that currently, the magnetic poles of the Earth are shifting and will soon reverse. The Earth’s magnetic field has “weakened sharply” in the last 500 years and has exhibited anomalies in the last four decades resulting in migratory birds losing their way and interference in airplane navigation. These documented changes, along with the general bad news of global warming, global warfare, and corporate greed, seem to point the way toward a big change—one we need whether we believe the prophecy or not.

With this in mind, Melchizedek proceeds to tell the story of travels he and others made in the last twenty years across the Americas and beyond, travels inspired by his guiding angels and his Egyptian scribe spirit Thoth. “They are true stories, though they may seem incredible by modern beliefs, and are given to you to inspire you to perceive the possibility of a beautiful future outside of the darkness cycle that seems to be invading this world.” Melchizedek speaks from a very intimate and personal point of view, as he relies on meditation and communication with these guiding principles in this life, and the travels he embarks on become internal journeys too, although they are shared with many people who have the same purpose. And so, speaking of the healing and integration ceremonies he and others performed at key locations, Melchizedek speaks to our imagination. Visiting the ancient sites of indigenous peoples like the Mayans, the Incas, the Anasazi, and the Maori, are necessary stations in healing the Unity Consciousness Grid so that the Serpent of Light may perform its duties at the appointed time. Melchizedek claims that this new age will mark the ascension of feminine energy over male, resulting in a healthy integration of the two. Once the Unity Consciousness Grid is fixed and whole, the Serpent of Light can guide humanity toward a change in consciousness, “or a change in how one interprets the One Reality.” Melchizedek has worked toward this healing for nearly forty years, in preparation for this much-needed change that may come just in time to save us from ourselves. 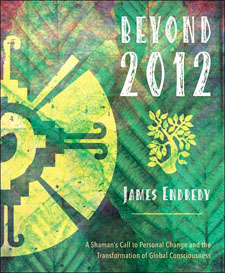 James Endredy’s book Beyond 2012 approaches the prophecy from his own life journey toward eco-shamanism, trying to re-integrate the sacred, natural world into our consumerist/corporate 21st-century lives through ceremony and spiritual alliances with the sentient forces of nature. A previous book, Ecoshamanism: Sacred Practices of Unity, Power, and Earth Healing, also delves into this practice, building on Endredy’s study of shamanic practices from different cultures for the past twenty-five years. Endredy structures Beyond 2012 with meditative conversations he has with the Kakaiyeri, a Wirrarika indian term for “deities and spirits of nature.” In particular, he communicates with Grandfather Fire (Tataiwari) and Grandmother Growth (Nakawé), who guide and encourage him as he seeks answers to questions about the changing world and the need for a collective consciousness change in its people before they destroy it.

Endredy’s work is also a practical guide: he walks the reader through a short history of prophecy from many religions to put the Mayan prophecy into perspective, and spells out the many natural and man-made crises that could speed along the destruction of our fragile world. Seen together, the accumulative evidence of the many natural disasters that have struck us in the recent past (devastating tsunamis, floods and droughts, earthquakes and mudslides, and not to mention possible threats from near-earth objects) is enough to make anyone believe we are at the end-times. But on top of all this, Endredy lists the horrors we have inflicted on our planet in the name of progress, greed, and expediency: global warming, warfare, pollution, and the rise of drug-resistant bacterias. As Grandfather Fire says, “You are out of balance with creation.” In order to get back into balance, we need to awaken our Luminous Self, a state of consciousness that unites us with nature and other people. This awakening is not without its painful aspects, as we must face our own selfish behaviors and failures as well as the horrors we have afflicted upon others, but it is a necessary step in healing our broken world. Endredy provides instruction in how to connect again with nature, advising us to align our sense of time and time-keeping spiritually with the earth rather than the arbitrary business calendar and deadlines that drive us to go faster and faster until we kill ourselves with stress. The Mayans had both a civil calendar and a sacred calendar to balance out their lives, and Endredy provides a suggestion for a twenty-day calendar that would work in tandem with the standard Gregorian one we use today, listing the names for each day and what each one signifies and requires. He also provides information on creating altars and other sacred spaces as well as a practical guide for “living through the Luminous Self.” Beyond 2012 offers a new way to see our selves and how we fit into the world. Especially moving are the conversations between this humble human and the wise spirits of the earth, which provide a powerful, more organic way into discovery and awakening. “As much as you can, in every moment, walk the earth as a little sun,” says Grandfather Fire. 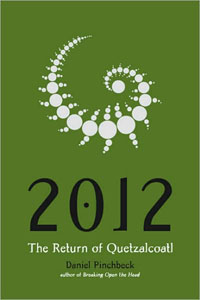 In 2012: The Return of Quetzalcoatl, Daniel Pinchbeck approaches the subject of the prophecy with a journalist’s eye, tempering an open-mindedness and willingness to believe with a New Yorker’s skepticism. As he says in his introduction, “I find it very strange —yet strangely familiar—to be making this investigation. I grew up a secular atheist in Manhattan. As a journalist in my twenties, I drank to excess at cocktail parties and wrote magazine profiles of celebrities, shoe designers, and artists. I never imagined I would recover a mythic dimension to existence.” His cynicism melts away as he opens himself to new experiences of consciousness. He goes on to say:

Often I have felt less like a person than a convenient intersection for ideas to meet and mesh, a magnet or strange attractor, compelled or fated—perhaps tragically misguided—to draw together Jungian psychology, quantum paradox, Frankfurt School critique, anthroposophy, and Mayan mythology with explorations of such seemingly outré subjects as crop circles, alien abductions, Amazonian shamanism, and the end of time. Whatever the fate of this work, I feel grateful—as well as humbled—to have received the chance to explore such awesome mysteries.

And so the book opens up as part-memoir, part-exploration into the murky subjective world of consciousness, reinforcing the idea that these metaphysical journeys cannot be severed from personal experience. Pinchbeck is extremely candid about his upbringing, his love life, and his struggles in maintaining relationships, and these intimate moments of realization rise up here and there as he probes the boundaries of belief. Still, his book is the most intensive and “objective” look at different phenomena which rely on deeply internal moments of perception, moments that expand consciousness and open up new ways of seeing the world and our selves. Be it through herbal (McKenna’s mushroom-consciousness and other psychedelic plants), extra-terrestrial (crop circle hunts and alien abduction scenarios), or ceremonial (Mayan rituals involving song, dance, and meditation) means, Pinchbeck re-orients these practices as part of a movement toward a massive consciousness shift that is also involved in the ascension of the female energy. “Women are seeking to evolve to a higher state of consciousness, a deeper realization, of their creative and erotic nature, but this can take place only if it is accompanied by an equally profound shift in the masculine psyche, from brutality and control to patience and mastery.” Pinchbeck eloquently juggles all of this mind-boggling and sometimes conflicting information as he weaves his own personal journey of discovery, taking part in ceremonies and attempting to break down the cynical and negative barriers we’ve all built up as a species over thousands of years.

While the female spirit or energy is supposedly in the ascension, it’s interesting that most spiritual leaders are men, at least the ones who write the books and lead the seminars and speak from the pulpits. That said, at least we do have a viable woman candidate running for president, and Oprah is a powerful conduit for information to the nation’s women, no matter what you think of her. Even so, five years doesn’t seem long enough to change everyone’s mind; it might take some catastrophic and painful change to turn around the greed-driven compulsions of corporations and governments. To overturn the disastrous effects of environmental neglect, the ravages of poverty and starvation, the ruinous state of healthcare, the addiction to oil, and the raping of our natural resources will require a big fight to oust the powers-that-be that feed off the continuation of the status quo. There must be a tipping point, a massive shift in global consciousness—but the world certainly cannot survive without it.

Click here to purchase Beyond 2012 at your local independent bookstore

Click here to purchase 2012: The Return of Quetzalcoatl at your local independent bookstore