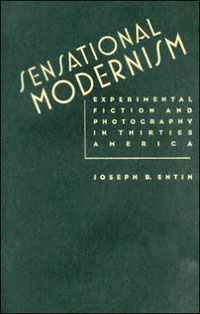 Joseph B. Entin begins his book on Depression-era fiction and photography by quoting from Pietro di Donato’s 1939 novel Christ in Concrete, where a character complains about the “transparent distant eye like policemen” with which the better-off view the poor. From there Entin proceeds to James Agee’s liberal-lashing comments in 1941’s Let Us Now Praise Famous Men: “This is a book… written for all those who have a soft place in their hearts for the laughter and tears inherent in poverty viewed at a distance.” Entin writes that these two statements are, respectively, critiques of naturalism and of sentimentalism, the default positions for social commentary in the early part of the 20th century. Sensational Modernism explores the artistic means di Donato, Agee, and others employed in hopes of derailing this social simplicity, which—whether they claimed to come from the right or the left—served to reinforce the power relations that helped (and still help) insure that the poor remain poor and distant, in more than one sense of the word.

Entin places these men within a “counter tradition” of left-leaning writers and photographers active during the Depression who used tabloid techniques as part of their aesthetic in an attempt to shock their readers into seeing the reality the traditional defaults obscured. (Other kinds of artists—such as the painter of teeming vertigo Reginald Marsh—are briefly mentioned in passing.) He does a good job of reshaping the concept of “sensational” to serve his end: joining to the cheap thrill aspect the overlooked but no less true idea that “sensationalism is a somatic discourse in the body and the sense, which emerged in the eighteenth and nineteenth centuries to describe the philosophic theory that all knowledge stems from the immediacy of physical experience.” The combination of this emphasis on the physical, on shock tactics with self-consciously artistic forms, is what Entin calls “sensational modernism.”

To expand and support his premise, Entin offers analysis of the flux of social forces in the Depression era, and illustrates his points through both quoted texts and close analyses of photographs (many but not all of which are reproduced). But this is primarily concentrated in the introduction and first chapter. Latter chapters are much more in the line of standard literary or art criticism. Writers considered include Faulkner and Fitzgerald, Richard Wright and Tillie Olson, and William Carlos Williams. Entin identifies the distinction between tabloid and modernist uses of sensational effects as being largely a matter of self-consciousness (which is clearly an underlying element of Agee’s ironic comment above), of the writer or photographer using them to conscious artistic effect. Entin’s argument is convincing in regard to the writings, though this is largely because Williams’s or Wright’s use of sensational subject matter or language—an exaggerated emotional “dialect” used in much the same way dialect in dialogue might be used to frame a character’s circumstance—is much less shrill than the language to be found in the tabloids, even when they were trying to provoke the reader with invocations of the gruesome. Wright’s skill at affecting a flat narrative voice is very much in harmony with Entin’s idea.

Of all the writers considered here, however, it is Williams who comes off as the most interesting in how he manipulates the contradictions within his stories. Entin’s explication of Williams’s story “World’s End” turns text and characters from one side to another, allowing us to see the foundation of humanity that supports the lurid content. Discussing the character of the young girl who holds together a crumbling household, he writes:

What he finds attractive is her vigorousness, her hardiness, her apparent self-forwardness—and the fact that those qualities seem to give her the strength to withstand the doctor’s authority and challenge him with her steely gaze. The narrator counters her defiant nonchalance with his objectifying look, reasserting his male, professional prerogative through an aggressive fantasy of control in which he imaginatively strips her naked and assesses her body: “She had breasts you knew would be like small stones to the hand, good muscular arms and fine hard legs.” Stripping her bare allows him to typecast her . . . [to fit her] neatly within a familiar paradigm.

Entin’s unpacking of William’s “doctor stories” shows them to be at once genuinely caring yet steeped in the conservative brittleness of the traditional hierarchies of race, gender and class. His reading also reminds us that the “sensational” elements in them—the second-class status of female immigrants, a sexualized interest in the body of a young girl who has assumed the role of family leader—are still with us, and still difficult to face.

Most of the other writers come off as less rich. Fitzgerald especially is revealed as thin and obvious, and while Entin labors mightily to move Christ in Concrete out of the sentimentalist camp, the now-antiquated style works against the move: “mingled over the sweat of his stubble were the marine contents of his blood and brains that spread as quivering livery vomit” sounds more like first-draft Thomas Wolfe than like writing meant to awaken our conscience.

The work of the photographers—Weegee and Aaron Siskind—proves much more difficult to free from their long-standing positions in the naturalist and sentimentalist camps—though the photos often are both at once. The observation that Weegee’s use of blinding flashbulbs eliminates much of the mid-rage grays and so is reminiscent of German Expressionism typifies how Entin grapples with these strong, even iconic, images.

In the end, Entin is less successful in locking down a new sub-species of Modernism than he is in opening up works we may think we already know, and in prompting us to follow his trail of unfamiliar questions and so approach them from a new direction.