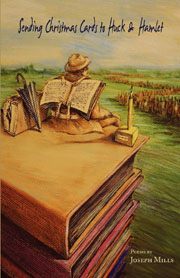 If Joseph Mills weren’t a poet, he’d be a storybook. And he’d come for dinner, not unlike the time he invited The Poems—such a nice, polite couple!—to his house. Like The Poems, Mills loves wine, as evidenced in his remarkable earlier book, Angels, Thieves, and Winemakers. But it’s doubtful he ever sinks as low as The Poems did: “Hey,” they shouted in a drunken state, “we’re The Poems . . . / . . . We get to say whatever we want.”

The thing is, Mills the storybook does get to say whatever he wants and what he wants comes out just right. The language of story is his flesh and bones, through which he understands the human being, the dream, failure, and the lonely search for beauty, sex, hope, laughter, and significance in one’s days and words.

Mills fashions his language into highly original narrative poetry in this collection of mostly free verse (exception: a delightful pantoum). His poems tell stories and are about stories and are stories within stories. “Tear what you need / from the stories,” he says in his poem “Salvage.” And tear he does—always with a quirky eye—from a world of literature (Shakespeare, Austen, Brautigan, et al.), fairy tales (Rumplestiltskin, Rapunzel), ars poetica, memory, and experience.

In “Manuals” the poet exposes teenage coming-of-age curiosity—without condescension. The speaker sneaks the books of Harold Robbins, Danielle Steele, and Erica Jong from his parents’ bedroom to figure out the mysteries of coitus, and inevitably, metaphor takes over:

but we knew these books
must have something to offer.
After all, they were the ones
our parents kept near,
and when we picked them up,
they instantly spread open
to certain pages, as if ready
and wanting to be read.

Everything in Mills’ world is wanting to be read. He immerses himself wholly in literature. There’s no telling who will be in his midst next or in whose midst he’ll be.

In the poem, “W.S. Merwin Tells a Story During a Q&A,” he is in Merwin’s midst, which is one story, and Merwin is lost in another story: about a burial site, shared by two skeletons, a bear and a human. Oddly enough, the human has the leg bones of the bear and vice versa. Mills observes: “the earth sometimes / has a different story to tell a man.”

The last part of the book is poetry about writing—writing Christmas cards, for instance, to Huck and Hamlet.

The silence doesn’t matter;
I’ve come to realize
letters are more
for the sender
than the receiver

. . . as poetry is perhaps more for the poet than for the reader. In Mills’ case, both poet and reader are sure to be satisfied. When he gets into writing about writing poetry, Mills is pleasantly self-deprecating and observant, and the reader gets absorbed in what he has to say. This is where The Poems come in.

They arrived on time, fully dressed, and clean,
which was reassuring. They even brought
wine, covered their mouths when they sneezed,
and talked about school districts and the weather.

Mills can talk about so much more, and he does.