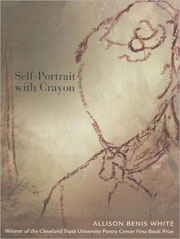 I fell for these prose poems the moment I started to read them, and I liked them even more once I figured out their donnée. Each of White's elegant one-to-two-page works takes its title and one (only one) of its subjects from a sketch, painting, or sculpture by Edgar Degas, he of the dancers (White was once a dancer herself). The other, usually more important, subject is White's own childhood, marked sometimes by the wonder and confusion almost any of us remember from our own first years, and sometimes by White's distant, troubled mother, who seems to have died young. ("Crayon" suggests a modern child's crayon but denotes a nineteenth-century painter's tool.) You don't need to see the Degas images to love the poems; you do need to have some sense of Degas's work—especially, perhaps, of his famous young dancers, with their unripe poise, their way of facing, and yet not facing, the adult world.

This technique of double exposure—one title, two topics—works so beautifully at the level of the single poem because White works so thoughtfully, at such striking levels of generality, at the level of the sentence: you could take her best sentences and print them separately as individual poems. "When a child throws a stone into a lake, God is pleased, and opens in rings, then fades to prompt the child to throw again." "I will not let you sleep follows the pattern of most affection." "I recognize is the reversal of I disappear."

A compelling aphorist, White also sets scenes: in "Dancers in Blue," "To remember now is then, or the difficulty of wearing an off-shoulder dress. Their dance is rehearsed before mirrors until grief is perfected." Describing herself even as she describes a Degas, White tries to describe anyone, everyone, me, you; as much as she says "I," she also adopts the (grammatically) impersonal voice of wisdom literature, with abstract nouns for the subjects of sentences, recurrent or "timeless" present tense for the verbs.

White is thus "experimental"—you can hear faint echoes of Lyn Hejinian's My Life—but her goals are very old: to record her life not for its own sake, but for the discoveries about emotion, memory, grief, beauty, and embodiment that her life has allowed her to make. White portrays characters who change inside, who mourn or fall in love and want to know why, but nobody will mistake her prose poems for short stories—when she asks "why" the answers she gives are not sets of events but emotional states and ideas, arranged in language that reflects on its own reflection, like the mirrors in rehearsal rooms: "I am loneliest with other people and require their absence in order to love them. Like the white impression of a headboard on the wall after a move, proof of the past is the occupation of the mind."

When White becomes well known, people will call her book "lyrical," but as with Killarney Clary—by far the writer she most resembles—it would be better to call them "harmonious," since she uses so much of the overlapping resonance within individual words: each poem builds up a sort of chord progression, with one line of notes in the "Degas" voice, one in the autobiographer's voice, one or three in more general terms. Purposely sparing on sensory details, the collection makes each detail go a long way, much as in the sketch that gives White her title: each line, each thing seen, carries an emotional weight the poet finds no reason to deny.