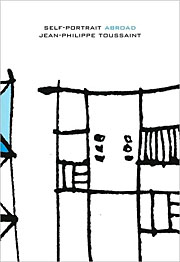 It’s common for American undergraduate liberal arts students to spend a semester abroad, experiencing new cultures and putting their diverse education to use in unfamiliar lands. But unless the student has family out there, is completely fluent in the host country’s language, or has just an affinity for this newfound otherness, said student will cluster together with his fellow study-abroad cohorts and see this experience mostly as an extended holiday from home. It really wouldn’t have mattered if they were in Tokyo or Paris, Johannesburg or Vladivostok.

Jean-Philippe Toussaint’s new novella, Self-Portrait Abroad, showcases the notion that experiences to be had outside our home country’s borders really don’t feel so different than those within. Experiences aren’t unique because of location; they are unique because of our perception. Within the first paragraph, the Belgian narrator describes Tokyo as such:

You arrive in Tokyo the way you arrive in Bastia, from the sky. The plane flies in a long arc above the bay and aligns with the runway to touch down. Seen from above, at four thousand feet, there isn’t much difference between the Pacific and the Mediterranean.

The first line seems to channel the opening of Beckett’s Murphy: “The sun rose, having no alternative, on the nothing new.” There’s nothing special to note; what is described is quotidian. Toussaint’s narrative is preparing the reader for a Hanna-Barbera cartoon experience: you’re going to focus on the action between the characters, not the rotating background that only adds slightly to the situation.

Self-Portrait Abroad is more like a series of vignettes, journal entries, and random stories of amusing excursions collected by the narrator. As the narrator is a writer himself, many of these travels are due to book tours, meeting his foreign publishers, and chance encounters that he feels are meant to be documented. In the chapter “Tokyo,” our narrator finds himself with “the scruchjètta (the word is Corsican) . . . a sort of pain in the kidneys that can strike you at any time.” It’s not due to anything that he does in Japan; rather he explains his pain as: “linked to the general weakening of my back since this summer when I carried my daughter down to the beach on my shoulders every day. . . I made an abrupt turning movement that twisted my spine.” It’s humorous that the first preoccupation of “Tokyo” is thisscruchjètta and its Corsican etymology, as well as its link to the narrator’s home life. The only reason Tokyo plays a part is because the narrator happens to be there at the time for cooking lessons, a bit that opens this tale up from being a trifle on a painful experience and creates a depth to the narrator’s story.

One of the more thrilling chapters is “Cap Corse (The Best Day of My Life),” the title of which feels like it could belong to a Jonathan Ames essay collection. It recapitulates the narrator’s Pynchonesque ride to victory at a boules tournament, which happens to occur not far from the narrator’s home. The odds seem against him and his partner, a “disparate, morganatic” pair. Their amusing competition is mixed with delightful insights into the world around them. A poster announces the tournament in a font called “New York”; the partners play at not speaking “like astronauts with less than an hour before take off”; and there’s

a Japanese woman who, not seeming at all ready to dismount, remained seated on the back of the scooter looking every bit like some hitherto unclassified mythological creature (neither siren nor seahorse: the top half a Japanese woman and the bottom half a scooter), carefully holding a bright yellow surfboard under her arm.

Descriptions like these make Toussaint’s novella fun to read, a light but carefully created work with recurring images and characters that loosely connect these seemingly incongruent chapters. Self-Portrait Abroad reminds us that we don’t have to travel to exotic places to have memorable experiences—and when we do travel, sometimes those experiences could have happened at home, like those of the unadventurous exchange student.