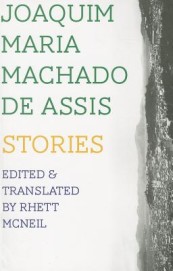 Machado de Assis is known for his blending of classic 19th-century style with a sensibility that seems to presage postmodernism. His ironic voice, his love of dark humor, and his predilection for reflexivity and metafictional frames make his works, such as The Posthumous Memoirs of Bras Cubas (also translated as Epitaph of a Small Winner) read as if they were written in the late 20th century. This new collection of his short stories, translated by Rhett McNeil, focuses particularly on what McNeil describes as his experimental period, from the publication of Posthumous Memoirs in 1880 up to his death in 1908.

Fully half of the collection is comprised of the novella “The Psychiatrist” (also known as “The Alienist”). The story, in which Machado de Assis sends up provincial life in a Brazilian town, reveals the author’s sensitivity to social class, political alliances, and religious affiliation. Through a series of increasingly over-the-top scenes and reversals of fortune, the story lambasts bourgeois and village pretensions; it also destabilizes our understanding of insanity, as the psychiatrist asks, “But were [the patients] truly insane, and cured by me, or was what appeared to be a cure nothing more than the discovery of their perfect mental disequilibrium?”

As opposed to “The Psychiatrist,” most of the other stories in this collection are short pieces. Some works are brief sketches, parodies with doses of the author’s subversive sense of humor. “On the Ark” presents three “undiscovered” chapters from Genesis that describe a scene of sibling rivalry on Noah’s ark. “To Live!” is written as a Socratic dialogue between Ahasverus and Prometheus, who meet at the end of time and interweave their Biblical and Classical stories. And “A Visit from Alcibiades” presents an epistolary retelling of the Greek orator’s death, related by a judge who calls him from classical Athens to 1875 Rio de Janeiro with disastrous consequences.

Other stories feature themes relating to life, death, eternity, and identity. Splitting and twinning are interesting subthemes; “The Academies of Siam” explores gender and identity through King Kalaphongko, who “was practically a lady,” and the beautiful Kinnara, who was “a masculine woman—a buffalo with the feathers of a swan.” As the academics of Siam engage in bloody fights over the question of whether souls are gendered, Kalaphongko and Kinnara enact their own experiment to see what their lives would be like if they switched bodies. In ten pages, the story highlights politicized infighting, gender norms and roles, and the gendered nature of political power.

In “Voyage Around Myself,” Machado de Assis combines his interest in split identities with an homage to Xavier de Maistre’s “Voyage Around My Room.” Early in the story, the protagonist quotes the following lines from Camöes: “I know not what occurred / Between myself and me / To make me my own enemy.” He then speculates, “It’s possible that the meaning of these lines is merely figurative, but there is no proof that it isn’t literal, and that ‘myself and me’ aren’t really two separate, tangible, visible people, standing face-to-face.” Similarly, the most inventive story in the collection, “The Priest, or The Metaphysics of Style,” depicts a priest’s efforts to write a sermon, not simply by describing his attempts to distract himself from his struggles, but also by taking a trip inside the priest’s head, where a noun is using “the language . . . of the scriptures” to call an alluring adjective to his side. Most of the story focuses on their struggles to find each other: “It’s a difficult and complex path, this trip through a brain filled with things both old and new. There’s a rustling of ideas in here that barely allows the lovers’ calls to be heard . . .”

Such tales make this collection a rare opportunity to explore Machado de Assis’ experimentation, particularly through ten stories translated into English for the first time. The tight temporal focus of the collection, from 1878-1886, provides an enlightening perspective on the author’s development as a writer during this critical period.