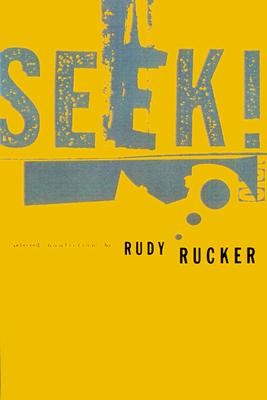 Rudy Rucker's Seek! offers a behind-the-scenes look at one of the more original minds in science fiction—a field with no shortage of original minds. In a collection that's diverse to the verge of scattershot, Rucker's intense enthusiasm in his subjects is the one constant. Of course, Rucker himself is pretty eclectic. A science fiction writer who got in on the ground floor of the cyberpunk movement, he's also a mathematician and computer programmer. His writing includes books on mathematics as well as numerous articles in various hip new periodicals like Mondo 2000, 21C, Wired, bOING bOING, and Axcess. Many of those articles are included in Seek! along with essays from such nonfiction SF magazines as Science Fiction Eye, The New York Review of Science Fiction, and The Bulletin of the Science Fiction Writers of America, excerpts from the manuals to a couple of his computer programs, and a few otherwise unpublished travel notes.

Even when he's being fairly straightforward, as in his highly readable "A Brief History of Computers," Rucker's quirkiness occasionally emerges. Who else would move so fluidly from "huge mainframe computers like UNIVAC and IBM" to the "Moloch whose mind is pure machinery!" section from Allen Ginsberg's "Howl"? Who else, in the course of describing German electronic computer pioneer Konrad Zuse, would casually mention that "the Nazi government's science commission was unwilling to fund Zuse's further research—this was the same Nazi science commission which sent scouts across the Arctic ice to look for a possible hole leading to the Hollow Earth." Rucker isn't just an oddball, however; he has a firm command of his subjects, be they mathematical or literary, and the odd digressions and eccentric linkages introduce new perspectives on them.

When he moves further afield, into less well-known territory (like cellular automata or the cosmological theories of Andre Linde) or more personal topics (living in Jerry Falwell's hometown, travelling in Japan, looking at paintings by Bruegel), Rucker's style resonates with the subject matter. This resonance peppers his essays with brief moments of illumination, epiphanal sparks that show us how odd a place the world is. In Rucker's prose, the "sense of wonder"—that traditional science fiction touchstone—takes on a new edginess.

It's no surprise that the essays cross-reference his fiction here and there. To a great extent, Seek! is an inventory of the stuff that Rucker's dreams are made on, and he often makes the crossover from "real world" to fiction explicit, as when he closes the "Science" section of Seek! with "Tech Notes Towards a Cyberpunk Novel." He begins the book's "Art" section with "The Tranrealist Manifesto," in which he lays out his program of appropriating real people and situations into fiction and mixing them with archetypal science fictional tropes.

To use a science fictional trope of Rucker's own invention, this eclectic collection is a good starting point for anyone wishing to twink Rudy Rucker himself. As he defines it:

"Twink" is an SF word I made up; to twink someone means to simulate them internally, to let their spirit take possession of you . . . Using a computer analogy, we can compare the body to hardware, and the mind to software. The personality, memory, etc., can all, in principle, be coded up to give the individual person's software soul. . . . Given enough information about another person, you can twink them.

Reading Seek! one gets not only "enough information" but enough of the right kinds of information— scientific, literary, political, culinary, spiritual, etc—-to mentally build a virtual Rucker and look out at the world through his eyes.