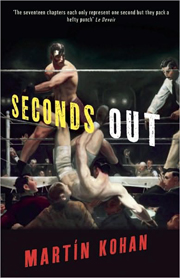 Though set largely in the provincial town of Trelew, Patagonia, circa 1973, Seconds Out contains several plot lines woven around an event that took place in New York City a half-century earlier—the famous heavyweight bout between Jack Dempsey and the Argentine Luis Angel Firpo, popularly known as “the Wild Bull of the Pampas.” The story’s protagonists are journalists who’ve been assigned by their newspaper to celebrate its fiftieth anniversary by revisiting an event that took place in the year of the paper’s birth. Verani, a sportswriter, naturally chooses the Dempsey-Firpo fight. Ledesma, an arts writer, decides to focus on a concert tour given by the famous composer and conductor Richard Straus to Buenos Aires in that year.

There would not appear to be much of a connection between these two projects, but Ledesma and Verani enjoy chatting over a drink in the bar after work, and there are long stretches of dialogue during which one writer tries to educate the other about the importance of the event he’s working on. These passages are often interesting—we learn a few things about Straus and Mahler and boxing, and Freud makes an appearance—although as conversations they don’t entirely ring true. The book becomes more compelling when Verani, combing the archives, finds a brief article describing a suicide in a hotel in Buenos Aires on the night of the Dempsey-Firpo fight. He makes some inquiries at the newspaper where the story originally ran, and soon comes to find this long-forgotten event more intriguing than the fight itself.

Alongside these journalistic probes, author Martín Kohan attempts to flesh out the Dempsey-Firpo fight itself. In fact, the book has seventeen chapters, each one corresponding to one of the seventeen seconds it took Dempsey to return to the ring after having been knocked through the ropes by Firpo in the first round. We watch the fight evolve not only through the eyes of Dempsey, but also from the perspective of the photographer he lands on and the referee who, stunned by the turn of events, fails to begin the count that would have led to Dempsey’s defeat.

Kohan strives for some sort of Proustian interiority in these passages, but for the most part they merely repeat and underscore the obvious. For example: “It’s strange how, at certain periods, events seem to multiply. I don’t know how to explain it, but there’s a kind of concentration of events. In a certain more or less defined period of time lots and lots of things happen.”

Three quarters of the way through the book, we learn that the man who died in the hotel room was a member of Richard Straus’s touring orchestra, at which point the novel’s two main strands—music and boxing—finally come together. But Ledesma and Verani are long dead by the time their young assistant travels north to an old folks home in Buenos Aires to find out what really happened that night.

There are many novels about which it can be said that to get the idea, you really have to read the book.Seconds Out falls into a different category. It’s as intricately plotted as a fugue built on a twelve-tone row. Unfortunately, considered page by page, very little of it comes alive.