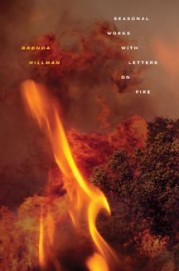 In the year 6939, a time capsule buried as part of a 1939 World’s Fair exhibition is scheduled to be opened. Since the contents were cataloged and much of the element of surprise will be gone, it is difficult to estimate how much interest this will garner. Will it be the doll and thread or the vial of seeds that holds meaning to the people of 6939?

As in time capsules, one never knows what references or tonal registers will date a poem and which will prove timeless. Brenda Hillman took this risk at the outset of her recently culminated tetralogy of poetry collections, each volume using one of the four elements as its cohering device. A staunch nonviolence activist and member of the women’s anti-war group Code Pink, Hillman could not have predicted the world events that would occur during her writing of the quartet, and the urgency with which she addresses current global concerns is palpable. That urgency becomes increasingly visible as the reader moves from 2001’s Cascadia (which is focused on California and includes a number of poems about the California Gold Rush) to Pieces of Air in the Epic (2005), Practical Water (2009), and now Seasonal Works with Letters on Fire, which takes on metaphysical conceits while also wrestling with a slew of contemporary evils.

In Seasonal Works, perhaps the friction between the ephemeral and the eternal are the two timbers that give way to spark. A year before its publication, Tony Hoagland, addressing Hillman’s oeuvre thus far in American Poetry Review, posed a question that remains relevant: “Hillman’s work brings into relief one of the central poetic questions of our era—are the profits and burdens of self-consciousness worth it? In what ways does avante-gardish self-consciousness gratify and/or debilitate the work of poetry?” My lingering question is similar: Do the risks Hillman takes in creating a time capsule pay off? Like Practical Water, which name-checks Sarah Palin, Seasonal Works employs ultra-contemporary lingo via references to “Facelessbook,” Monsanto, AstraZeneca, Novartis, Halliburton, and many other institutions that situate the narrative within the extremely present moment, thereby risking some shelf life. However, Hillman also deploys a snippet of Hopkins (“dearest freshness deep down things dearest freshness”), includes an ekphrastic poem on a piece by the fifteenth-century ikon painter Andrei Rublev, and mentions the Latin name of almost every organism she describes throughout. “This is where poetry can be helpful. Poetry goes past the limit. It makes extra helpful nerves between realities,” she writes in “Experiments With Poetry Are Taken Outdoors.” Poetry, Hillman seems to be saying, is as relevant as ever and will be as relevant as we let it be.

Hillman’s self-awareness has historically expanded to her use of form, with which she has experimented throughout her career. In Seasonal Works, the storylines are a bit easier to follow than they were in books like Cascadia. “I was being a little transgressive with the narrative impulse in both this book and the last because there is a big prejudice against narrative poetry in some communities,” Hillman said in a chat with The Rumpus Book Club. Asked to follow up on this remark, Hillman commented: “The narrative impulse at times has great appeal, and it isn’t just one thing—a block of rendering events. I don’t find use of narrative or emotion or story incompatible with experiments, innovations, concepts—in form, subject, syntax, and so on.” Even though the stories are rendered with a more linear nature here, there are still plenty of swing margins, em dashes (the whole book ends on one), and other techniques more often found in so-called experimental poetry. One particularly striking move is Hillman’s rendering of the same poem in both verse lines and prose poetry (“A Quiet Afternoon at the Office”). This telling and retelling, printed on facing pages of the book, forces the mind to think back upon its own traces, seeing what stands out in each version and ultimately forcing a closer look at both.

This desire to revisit the poem’s beginning carries through to the cycle as a whole: at the end of Seasonal Works with Letters on Fire, a thorough reader can’t help but feel compelled to crack open Cascadia, knowing only now what Hillman would find to put in her time capsule.