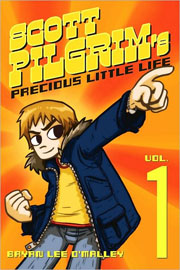 A love story, a soap opera, a slacker comedy, and an action-fantasy epic all at the same time, Bryan Lee O’Malley’s Scott Pilgrim series of graphic novels has a lot going on. It mixes magic realism with nerdy pop-culture references and indie-rock street cred with aw-shucks sincerity. It also has a high concept that’s made to sell: a twenty-something slacker has to battle his dream-girl’s seven evil ex-boyfriends in video-game-style punch-outs for the right to date her. Yet it devotes at least as much time to hanging around with the supporting cast, which is big enough to justify actual charts in a couple of volumes, with tangled interpersonal histories that can stretch back to elementary school. O’Malley juggles all of this seamlessly, especially for a guy who can only distinguish one character from another by giving them different haircuts. 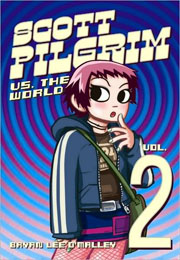 All that energy on the page, however, makes it easy to miss the little things that make Scott Pilgrim more than just a Hate for the new millennium. One of the best of those little things comes midway through Volume 3, the comparatively dark Scott Pilgrim and the Infinite Sadness. It’s a quiet moment that could be easily overshadowed by the wonderfully goofy yet gut-wrenchingly emotional finale that follows, yet it might be the turning point for the whole series, the moment when both Scott Pilgrim the character andScott Pilgrim the series come of age.

Scott, our Torontoan loser-hero, is standing in an alley behind Lee’s Palace (a real-life Toronto rock club), bracing himself for a huge show for which his shaky-at-best band is woefully under-rehearsed. He’s just had a painfully ambiguous moment with Envy Adams, the love of his life and the girl who totally crushed him. As Envy disappears down the alley, Scott sees a tiny figure slumping in the shadows against the wall. It’s Knives Chau, a sweet, seventeen-year-old girl who’s been warped into a minor villain by the thoughtless treatment she’s received from everyone she cares about—most of all Scott himself. Spotted by her, Scott goes through a five-panel sequence of emotions, from alarm, to faked nonchalance, and finally to an affectionate smile. And then he does what might be the most heroic thing in the entire series: he walks up to her, slumps down beside her, and apologizes. 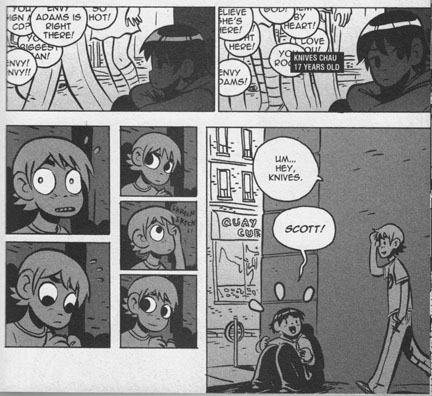 Art from Scott Pilgrim and the Infinite Sadness, Vol. 3

It may not sound like much, but Scott is a character who, in the first volume, two-timed Knives with his main love interest, American ninja and Amazon.ca delivery girl Ramona Flowers, because he was too cowardly, indifferent, or just plain lazy to break up with her. In Volume 2, he sits at home playing old Nintendo games while Knives and Ramona duel at the Toronto Reference Library—because, as he exclaims to the roommate who supports him financially, “Like I know where the reference library is!!” In other words, Scott is a child, and a fairly shiftless one at that, and consoling Knives when it would be less awkward to avoid her is the first really adult thing we’ve seen him do. Volume 4, entitled Scott Pilgrim Gets It Together, illustrates Scott’s maturation far more graphically (and amusingly) with an RPG-style upgrade sequence at its climax, but the real turning point in Scott’s arc is here, in a simple character interaction tucked between video game-inspired sight gags. 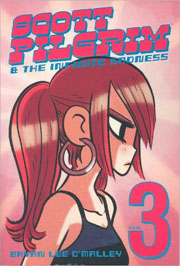 That’s a testament to the series’ maturity as well. O’Malley is wise enough to realize what Scott, as of the conclusion of the most recent volume, still has to learn: that growing up is something that happens incrementally, in small movements and repeated struggles, rather than in a single moment of triumph. It’s this understanding that justifies the series’ loose, long-form pacing, in which secondary characters like Knives and Envy are given subplots that are often more compelling than the main story between Scott and Ramona. At times, O’Malley may seem to be stalling for time in order to fill out a predetermined number of books, but in reality all of these hesitations and digressions add depth to the series. Scott’s burgeoning awareness that his friends have lives and feelings separate from his own—that he’s living out an ensemble drama more than a solo quest—is one of the most critical measures of his growing adulthood. Scott has to learn not just that life is a journey rather than a destination, but more so that it’s a massively multiplayer open-world sandbox rather than a linear platformer.

Many of the supporting characters’ arcs also provide echoes or foils of Scott’s own, added reminders that growing up is a process rather than an achievement. For Knives, the life of arty, youthful hipsterdom that Scott and so many of the other characters are outgrowing represents a level of maturity she’s just discovering. Meanwhile, even characters who seem relatively settled and in control—like Scott’s acerbic gay roommate Wallace Wells or his band-mate and longsuffering friend-plus Kim Pine—discover over the course of some of the more recent volumes just how much they still have to let go and leave behind, often in ways that involve separating from Scott himself. Most importantly, Ramona, who begins the series as the unattainable exemplum of competence and initiative to which Scott must rise, has slowly revealed her own issues as Scott has conquered his. It seems likely that, in the series’ conclusion, Scott’s final test of maturity will be to put his own problems aside and focus on pulling Ramona through hers, returning the favor that (in an odd, tough-love sort of way) she and her seven evil exes have done for him. 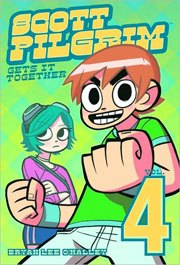 Over the course of the six years it’s taken to complete the series O’Malley has grown up as an artist as well. Right from the start his art was wonderfully expressive and energetic, but whereas the ragged, inconsistent line of Volume 1 drew some criticism (however misguided), it’s hard to imagine anyone doubting the elegantly designed pages of Volume 5. O’Malley has developed a remarkable control over the series’ manga-sized canvas, allowing him to convey timing and movement with genuinely cinematic precision. Many of today’s mainstream superhero artists, with their seeming fetish for filmic pacing and effects, could stand to learn from O’Malley’s ever-growing skill as storyteller. He can stretch out a second’s worth of action over a two-page spread to create a dramatic slow-mo effect, or use a series of diminishing panels trailing down the page to suggest a long, lingering fade to black. He can even follow a cigarette tossed from a balcony as it tumbles into space, in a moment that’s at once incredibly cinematic and perhaps untranslatable to film.

More importantly, O’Malley employs these filmic devices without abandoning any of the artistic resources unique to comics. For example, many of the series’ best lines are delivered not by any of the characters but by the charmingly off-handed, absent-minded caption boxes; possibly the best joke in Volume 5 relies entirely on a combination of those captions with a hilariously mock-heroic use of manga-style speed lines and goofy onomatopoeic sound effects (“nom nom nom”). In fact, the joke lies mostly in the jump-cutting between panels, an effect that would be hopelessly distracting on screen, but is perfectly natural in comics. At the opposite end of the emotional spectrum, in the volume’s last act, after Ramona has suddenly disappeared, the panel borders dramatically retreat from the edge of the page, subtly but powerfully mimicking the void she’s left in Scott’s life.

We’ll soon see how well O’Malley is able to close out the story he’s been telling since 2004, when Volume 6, Scott Pilgrim’s Finest Hour, is released next week. Serialized mediums have a way of disappointing in the clinch—just ask a Lost fan. Heck, even Watchmen has kind of a dumb ending. But unlike the producers of Lost, O’Malley seems to have had his story pretty well planned out from the start, and his growing skill in each volume published so far should inspire confidence. 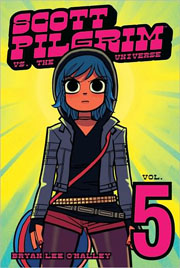 More uncertain is the success that director Edgar Wright will have in adapting the comic for the big screen next month in Scott Pilgrim vs. the World. The trailers suggest that a lot of effort was taken to translate the books’ combination of comic-book energy with video-game iconography and cinematic art. But since the film’s plot retains all seven evil exes while compressing the series’ 1000+ pages into a single movie—mandating no less than half a dozen action sequences—it seems likely that moments like Scott’s apology to Knives may be crowded out. 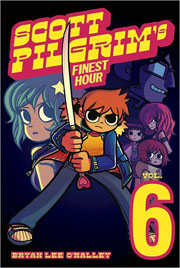 And that would be a shame, because ultimately the Scott Pilgrim series is less about love or fighting than about friendship and family—about moments even quieter than the one between Knives and Scott behind Lee’s Palace, moments in which nothing is really happening because the characters are just sitting around together playing songs, or eating sushi, or getting drunk on stolen tequila. These are not the moments in which Scott struggles into adulthood, but the ones in which he savors the last of his youth. They’re also the moments through which O’Malley has achieved his most impressive use of his serialized medium: creating a world engaging enough to share double-billing with the main character in the title of the series’ second volume (the same as the title of the film). It’s a world in which just hanging around with the characters is reason enough to look forward to the next volume, and one that fans of the series—like Scott himself—will surely feel reluctant to leave behind.