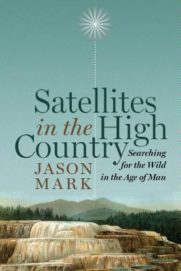 Is the wild relevant? Given the evidence of humanity’s presence in layers of ice, tree bark, whale blubber, the night sky and the atmosphere, have we extinguished the wild while domesticating the planet with pollutants and surveillance systems?

Despite (or perhaps because of) the far-reaching extent of our toxic and interventionist legacy, journalist and back country explorer Jason Mark argues that not only is the wild relevant, we need it now more than ever. “In wildness resides mystery,” he writes, “and we need mystery in our lives like we need our daily bread. Mystery nourishes imagination; it is hope’s fuel.”

Saddened by the academic proclamation that we have entered the Anthropocene, or the Age of Man, Mark challenges this unsettling intellectual posture, which turns us into the “ruler of life on the planet” rather than inhabitants who have yet to figure out how to share the planet with one another and other species. It also sets a dangerous precedent that could be used to justify radical interventions engineered to counteract the ill effects of industrialization and sprawl, such as lowering the earth’s temperature by dousing the air with sulfate aerosols or spiking the oceans with iron filings.

Scientists and thinkers continually reinforce the uncomfortable truth that we live in a post wild, post pristine world. Instead of succumbing to the hopelessness this point of view can instill, Mark confronts this gloomy assessment of our current situation by instigating a deeper probe—on the ground, near fast-running water, within range of wolves and in intimate contact with tree trunks that can wedge splinters into a fleshy foot. The resulting book reads like a nonfiction picaresque. An affable, knowledgeable, clear-sighted guide, Mark takes readers to the heart of the matter, to the core of our planetary dilemma: how to live together on this “overheated and overcrowded planet.”

Not far from one of the nation’s largest urban areas, Mark illustrates the complexities of the wild while reporting on a conflict over the common oyster at Point Reyes National Seashore. Laying the groundwork for supporting evidence in defense of the wild, he offers a survey of conservation history in the United States. He heads into the Olympic Mountains to escape the “clatter of civilization” and asks, “Does a place still have value even if it is of no obvious use to humans?” He rhapsodizes on the “elegant economy of death” when contemplating the succession of life feeding on fallen trees in an ancient process that requires no human intervention.

Reporting from Alaska, “an emblem of the wild,” he spots a red fox well outside its ordinary range on the tundra of the Arctic National Wildlife Refuge and addresses the difficult decision of how and when to intervene on behalf of the “casualty of climate change.” As plants and animals migrate in response to a warming planet, some of them face extinction because they have nowhere to go.

And what about people—are we or are we not part of nature? Mark asks this very question while visiting Lakota country. He explores historical terrain while wandering the vast territory in western South Dakota, reminding us that we need “the stories of the people who lived here first” to understand where we fit in the scheme of things.

The North American continent is scarred by history—massacres, displacement, broken treaties, bombings. Humans roamed, gardened, built elaborate dwellings, made art, and hunted long before European settlers arrived. America, or the New World, was not the Eden settlers projected onto it. Ongoing discoveries about how first peoples transformed the land add to the threats that put the wild at risk. Why treat wilderness as if it were holy if wilderness never existed?

Mark seeks middle ground. He listens. He watches. He sifts through layers of human experience to enrich his understanding and ours, to transcend seeing the wild as aesthetically pleasing or useful. He does not lament the evaporation of romantic illusions perpetuated by his literary predecessors. This sort of inquiry can only lead to a deeper connection, which is something Marks seems to yearn for throughout the book. “To put the wild into a historical context is to evolve from scenery, to landscape, to arrive finally at place.”

Whether trekking in the California mountains celebrated by John Muir, seeking a place free of human intrusion only to find a banged-up cooler in the far north of the Arctic National Wildlife Refuge, reveling in the discovery of uncollared wolves ordinarily “held tightly on the leash of our laws” in New Mexico’s Gila Wilderness, or making futile attempts at starting a fire using primitive technologies while “going primal” in the Cascade Mountains, Mark stays true to the journalist’s duty to tell all sides of the story. He endures disappointment when his gear fails, a crew member gets injured, or the weather turns foul.

He tackles tough questions while demonstrating the moral integrity and compassion the wild can offer us. Seamlessly weaving past and current views on the value of the wild and importance of wilderness protection, interviews with members of his excursions and residents embroiled in controversial land use conflicts and personal observations and anecdotes, Mark clarifies the meaning of wild and argues convincingly for its defense.

There are no easy answers to the questions he raises. Wilderness, he says, “builds receptivity,” heightens our “moral obligations to other beings.” While observing a flurry of white moth wings in a dark forest, he invokes Edward Abbey’s appeal to consider the intrinsic value of species apart from human use. “For a being to live independently of humans is, in some ways, the essence of wildness.”

As we shrinkwrap the world with wireless connections, radio telemetry, drones, and satellites, the question of whether wild, untrammeled places are still relevant strikes me as irreverent. “Old-fashioned wonder outweighs irony,” Mark concludes. Few things elicit wonder as readily as wandering long distances in places with scant traces of humanity, as hard as they are to come by. Therein lies part of their allure.