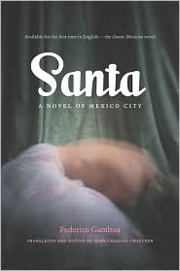 This book’s English translator, professor of history John Charles Chasteen, provides a brief but extremely useful introduction to the 110-year-old novel Santa, offering readers some depth only scholars might already have. Santa—which describes turn-of-the-twentieth-century Mexico through the life of the inexplicably named Santa, a country girl turned urban prostitute—reads like a television soap opera. It has outlandish content, flowery, enthusiastic language, and even a liberal usage of images trailing off into ellipses. Indeed, in the late 1970s, it became a telenovela.

“Cared for by our eternally affectionate mother earth, with wild birds for their friends, and with dreams as simple and pure as the violets that grow hidden along the banks of a river”, Santa still manages to get pregnant out of wedlock. Her heartbroken mother and angry, disgusted brothers throw her out. Having once been approached by a brothel madam, Santa travels to Mexico City to seek that woman out. While Santa suffers some internal conflict once settled into the brothel—“she cried a torrent of tears from varying origins . . . a secret mourning for her lost purity”—what can she do?

Blessed with a stunning physical beauty, Santa quickly becomes the highest earner. Over the course of this slim novel she moves in with a matador, who almost stabs her to death for her infidelity; she returns to the brothel, where she is swept away by another customer; and she is struck with cancer and plummets to the most frightening depths of Mexico City—her final madam has forearms that “could have belonged to an Egyptian mummy” and hands that “unfolded themselves like trained tarantulas to explore Santa’s hips, thighs, and breasts through her dress”. Finally, she finds bittersweet redemption through the love of a shabby, ugly, blind old man.

Beyond being a fun escapist soap opera, Santa was adapted into Mexico’s first film that included audio; indeed, as Chasteen informs us, “some young Mexican prostitutes in the 1930s told their life stories to social workers in terms that sounded much like Santa’s . . . in doing so, they often mentioned the 1932 film version.” A naturalist by profession, author Federico Gamboa kept a “detailed journal” with his observations of people and city places, as he might have with animals and their natural habitats.

Of course, this isn’t to say that Santa is some magically objective history. Other things Chasteen shares about Gamboa—that he was born a socialite and maintained his conservative, Catholic, and pro-authoritarian-rule beliefs throughout life—shows that Santa is not an underdog story told by underdogs. It’s by someone looking in, and down. Late in the novel, Gamboa’s narration—which shifts without warning from past-tense specifics following Santa’s life into present-tense omniscience—describes the “slumming” rich boys do with uncanny accuracy. The owner of a popular dive “truly feels sorry for them, but since he can do nothing about these characteristics of theirs, he has resolved to exploit them quietly and systematically”.

Regardless of any bias, Gamboa does display in Santa his skill at describing human detail—from the gentle glimpses of the blind man’s fumbling hands to the strange fact that in a crowd where someone is ill, someone else will become an amateur doctor and make things just a little worse. Ultimately, in its quiet moments, Santa is a soap opera a reader can’t forget immediately because its author never forgot it, never hung Santa out as one dimensional, as a mere triviality:

Without thinking about what she was doing, she entered the pastry shop next door to the hotel, where the employees were clean, pretty, and friendly, and wore light-colored aprons:
“What do you want, señora?”
What did she want? She wanted to be just like them, or at least, the way that she imagined them to be: decent girls who worked long hours, lived at home, and loved their faithful boyfriends . . . Blushing, she bought candy because she thought she should buy something, and nothing else occurred to her”.

A reader suspects that, like any good scientist, this author learned something from his own research, too.