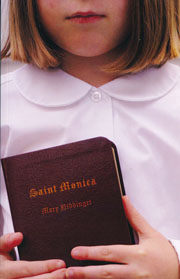 Mary Biddinger’s chapbook transports St. Monica from her historical context as the mother of Saint Augustine and patron saint of abuse victims, alcoholics, housewives, and mothers, reimagining her life in the modern day as a 20th-century Catholic girl with an abusive marriage looming in her future. Peopled with nuns and May processions, shirtless boys and Camaros, the poems evoke the lush dichotomy of innocence and temptation, purity and desire, that is particular to a Catholic school education. Monica is both “the girl with hair tucked behind her ears,” taking notes on Shakespeare, and “the girl with hair in her face,” cutting class to smoke with the boy she can’t stop thinking about. This tension between good and bad suffuses the chapbook, but neither persona satisfies Monica fully, caught between what’s expected of her and her emerging sexuality. When the older Monica, now a wife and mother trapped in an unhappy marriage, looks back on her youth, we’re never sure which she regrets more: being too bad or not being bad enough. Either way, she yearns to go back and do things differently, but even a modern saint is unable to change her own story. Monica knows how to “proceed as planned” no matter what obstacles arise.

Far from the holy matron described in saints’ books, this Monica is just as confused, angry, and turned on as the rest of us. Biddinger’s tight and vividly detailed narrative poems speak to timeless themes of adolescence, regret, and desire, enlivening a historical figure and religious icon while painting a nuanced portrait of a character who is every bit as imperfect and fallible as everyone else.