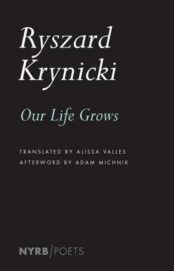 Krynicki was born in a Nazi labor camp near Vienna in 1943. He grew up in a Poland “poisoned and paralyzed by political repression, economic corruption, censorship of the press and the arts, and state-sponsored campaigns against Jews and intellectuals,” translator Alissa Valles tells us in the introduction to Our Life Grows. As a young poet, he was one of the leaders of the “Generation of ’68” or “New Wave” of Polish poets who dared to speak out against the official lies. His work was censored and eventually banned; for a time, his name could not appear in print in Poland. Our Life Grows was published in Paris in 1977; the present New York Review Books volume also includes And We Really Didn’t Know (Early Poems).

These early poems show a fearless poet boldly confronting official propaganda, “the manifold lie, that everything could be erased, / that you could forget it all / and pretend nothing had happened.” Krynicki’s dark humor often appears even in the early poems, as can be seen in passages concerning “Nikita / Kruschchev’s posthumous / state of health,” and observations such as “the longer the speeches lasted—the longer the bread lines / got.” Yet we see a striking concision in the later poems of Our Life Grows. Take “My Daughter Learns to Read,” here in its entirety:

My little daughter, faultless until now,
is learning to read and write
and only now does she begin to err

and I live my old errors of humanity
all over again.

Kyrnicki uses an oxymoron in his poem “My Beloved,” a phrase that describes his work well: “intimate distance.” This “intimate distance” allows him to feel great compassion for those manipulated by a repressive political system, and the anger to expose it: “human evil, / capable of everything, / prepared for anything, / is infinite, / and more inhuman / then we can possibly imagine.” Imagination harnessed as a tool of resistance serves as the main source of sustenance in these poems, as can be seen in “O,” a poem dealing with optimism, or at least the form offered by the government:

Krysinski’s dark humor once again surfaces, his pessimism seen sprouting from the second letter of the word “optimism”—which generates, what else, "pessimism." 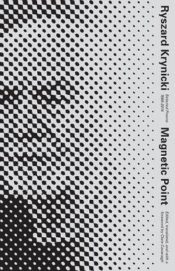 Magnetic Point, the New Directions volume, casts a wider net than Our Life Grows, as it includes poems from 1969 to 2014. In her informative introduction, translator Clare Cavanagh notes Krynicki’s “compression, mysticism, [and] wit.” To that list should be added his bittersweet empathy, as can be seen in the short poem “How to Write?”:

To write so that a hungry man
might think it's bread?

First feed the hungry man,
then write so that his hunger
won’t go in vain.

Here, in five lines, is the author’s ars poetica. Writing has an important role, Krynicki believes, but there is a more essential priority, and once this has been satisfied, poetry may well threaten those in power. “How to Write?” clearly reveals why Polish authorities during the Cold War feared and censored this poet.

The last book from which Magnetic Point selects poems is Haiku from Last Winter (2009-2010), and it comes as no surprise to see Krynicki, always a lover of concision, embrace haiku. Like Issa, Krynicki often takes note of insects:

In today’s mailbox
alongside ads and bills:
a shrinking spider.

Because both the NYRB and New Direction volumes offer translations from Our Life Grows, the reader often has a chance to compare versions of the same poem. Here’s the opening of the title poem as translated by Alissa Valles:

Here are the same opening lines, as translated by Clare Cavanagh:

While Magnetic Point provides the better overview of Krynicki’s poetry, readers are fortunate to have both volumes of this poet, who speaks to our own time. It may sound odd to say this about a Cold War survivor, but consider this excerpt from “Truth?” with its questions many Americans are now asking:

Don’t be surprised if one day soon Ryszard Krynicki joins Czesław Miłosz and Wisława Szymborska in winning the Nobel Prize for Literature.