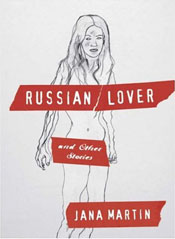 Martin’s characters crackle with these, and Russian Lover is a collection, foremost, of inimitable voices. Snarling with moxie, cultivating wounds, and always determined to survive, the women in this book work with what they have available, weaving logic to fit their circumstances. Witness the whip girl, sipping rum from an empty aspirin bottle she carries around, making her own way through the unfamiliar, morally upside-down frontier town of Miami:

For a week I stayed in, watching the Spanish channel. Ate at the Howard Johnson’s right next door. Tried to eat aquatically, as if to acclimatize: clam chowder, fish and chips, fried clams, fish chowder. It all tasted the same, like old grease, a slightly alcoholic tinge to the tartar sauce…

The story here involves bondage play and coke-fueled orgies, but isn’t about them. It’s not even about the psychotic with the baseball bat or how his break-in turns the bondage tables on the dominatrices in a bad way. The story is essentially about how the protagonist phrases what she feels: “And I did get stupid, numbed by the yellows and then snowed under until that part right above the back of my throat began to click, so I went for the champagne,” she says, in retrospect, of her first big party and performance. All the trappings and theatrics and pantless men in tuxedo jackets add up, in her mind, to one simple thing, “A holiday bonus: I wasn’t boiling dishes in a Hobart anymore.”

The women in this book are familiar with hunger and know what it feels like to catch a bus out of town, toward the sort of rebirth that involves pest-infested motel rooms and the sight of fat strangers copulating in the moonlit pool. They know that hope is something you can cash in, but it’s also something you have to work to earn:

I will jerk orange juice into cone cups at a drugstore. I will dust off boxes of envelopes in the five-and-dime. I will time dental X-rays. I will rotate the chickens roasting on the supermarket rotisserie for the retirees to buy, so they can gum the soft meat and get some protein, which everybody needs.

In the title story, a woman drafts a series of letters to her former mother-in-law attempting to explain a certain holiday rampage. The verve and venom vented here pits the woman, betrayed for some “Russian rimjob Korsakov,” against the stiff facades of her husband’s old money family. The Christmas goose glistens under its sheen of fat, and various antiques and heirlooms get clawed, kicked at, and broken apart. The clash of voices, though, is what makes the story really writhe. After an icy airport reunion and a variety of nonverbal rebuffs, the best the husband can come up with, in terms of giving phrase to his emotions, is “a translation of the Russian interpretation of the English colloquial, which he found far more realistic and better suited for use.” So contrasted to “the proverbial straw that fractured the back of the camel” there is the volcanic hyperbole of the wronged wife, who informs her former mother-in-law about, among other things, the sort of man she’s moved on to, one who doesn’t wear scarves indoors or spend time studying Russian texts, but, rather, “is old-fashioned, no-holds-barred, rear-wheel drive… And he has never even been to Massachusetts and can’t name any of the Pilgrims and thought the ship they came in on was called the Wallflower.”

There is something almost disembodied to this emphasis on speech. Martin’s characters live in a dirty, dangerous world and are thus familiar with filth, though less disgusted than dismissive of it. They approach physicality as something to work with and transcend, another accessory. Physical but not flesh-bound, these characters rise above the roach carapaces in the carpet or the yellowing ooze of a sore to revel, even get lost in, the play of words. As a needled, Greyhound-bound, ex-junkie puts it, plastic “can never really be cleaned. You have to abrade it.”

The use of language in this book has its own abrasive quality, forcefully clarifying. How the stripper lost her job is secondary to the salt-tinged pulse of the prose through which she sees the evening come down: “hours crawling towards night. Rank sunset coughing up a sallow moon.” What happens to the indie-band girl takes backseat to the narrator’s pegged sketch of her: “retro fleshpot, cinched into vintage, black lacquered hair, black nails, dark voice.” The taste of these golden passages is shot throughout Russian Lover, and such craft is the mark of a unique talent, a master of character and voice.