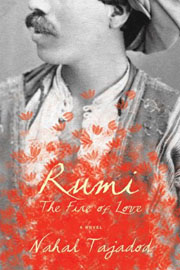 This book is the first comprehensive and authoritative historical novel in English about the life and mind of Jalaluddin Rumi, the 13th-century Persian mystic who is one of the most widely read poets in North America. Nahal Tajadod confesses that it took her several years to finish this book, during which her mother (a scholar of Persian literature who helped her to understand Rumi) died and Tajadod gave birth to her first child after ten years of trying. During those years, her husband would often inquire about her book on Rumi, and in reply Tajadod would quote from one of Rumi’s own poems: “For a certain time the book has been delayed.” One day, Tajadod writes, while breastfeeding her infant daughter, she opened Rumi’s book and found out that that particular poem continues like this: “Because it takes time for blood to become milk.” Its long gestation seems to have paid off, for Rumi: The Fire of Love is a delight to read.

Rumi was born in 1207 in Balkh (now in Afghanistan), an ancient city in the Persian kingdom whose history is blended with the march of Zoroastrian, Buddhist, and Islamic faiths. His father, Baha Valad, was a Sufi preacher (and indeed, Rumi’s first teacher). Shortly before the Mongols sacked and massacred Balkh, Rumi’s family migrated westward and finally settled in Konya (now in southwest Turkey), an important city in Anatolia then ruled by the Seljuk dynasty. Anatolia was once part of the Byzantine Empire, or Rum in Persian—hence the name “Rumi” for the poet known respectfully to the Persians as Moulana, “our master.” After Baha Valad died, Rumi, then age 24, studied under several teachers and spiritual masters, and ten years later, took over his father’s position as an eminent teacher and scholar in Konya. In 1244, Rumi happened to meet a wandering dervish named Shams (literally meaning sun) in Konya’s bazaar. It was Shams who awakened Rumi to esoteric knowledge, mystic love, and union with God. This was a new beginning for Rumi, who said: “I was dead, behold I became alive. I was a tear, behold I am laughter.”

Rumi treasured spiritual friendships and “dialogues” (a tradition known as sohbat in Sufism); Shams was his first brother in soul. After Shams left Konya in 1248 (or was killed by Rumi’s jealous students, as another theory goes), Rumi found another friend to speak with, Salah Zarkub (“goldsmith” by profession), between 1248 and 1258, and finally Hesam Chalabi, from 1258 until Rumi’s death in 1273. Rumi: The Fire of Love is thus divided into three parts: Shams, Salah, and Hesam. Although Rumi’s contact with Shams was relatively short-lived (less than four years), more than half of the book is devoted to the Shams period, not only because Tajadod has squeezed the first three decades of Rumi’s life into this part, but also because of the overwhelming impact of Shams on the last four decades of Rumi’s life. Rumi is well-known as the originator of whirling dervishes (a Sufi order which Rumi’s son Sultan Valad actually organized, not Rumi himself). But how did Rumi discover whirling dance as a spiritual practice? A 1998 documentary film, Rumi: Poet of the Heart, informs us that Rumi turned to whirling after Shams had left him and while Rumi was longing for his spiritual friend. But Tajadod’s research suggests that Shams actually taught Rumi the practice of whirling dance.

Tajadod portrays Rumi not merely as a Sufi master, but as an embodiment of ancient spiritual wisdom absorbed from Islamic, Christian, Jewish, Greek, Persian, and Indian traditions. The book ends with Rumi’s death on a Sunday in Konya (where his tomb has been a shrine for centuries); his funeral was attended by people of various faiths, ethnicities, and languages. Another significant aspect of the novel is that Tajadod knows Persian, Rumi’s language, and has thus used original sources to write this story. These sources include Rumi’s own works: Diwan shams (“Book of Poetry dedicated to Shams”), Masnawi ma’nawi (Rhymed couplets on spiritual matters), and Fihi ma fihi (Discourses), as well as the extant books of Shams’s Discourses (Maqalat shams), "The Book of Sultan Valad" (Valad namah), and a huge volume, Manaqeb al-arefin (“The Virtuous Acts of Mystics”), written by Rumi’s disciple Ahamd Aflaki after his master’s death.

Tajadod, who was born in Tehran and has lived in France over the past three decades, holds a Ph D in oriental literature and is a scholar at the French National Research Center. Her husband, the acclaimed French screenwriter Jean Claude Carrière, is currently working on a film version of the novel; one can only hope that the film is as vivid and accurate as the book.