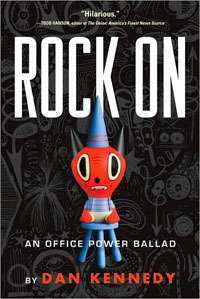 Imagine landing your dream job, only to realize that this job completely destroys and invalidates the dreams you once had. This job takes everything you thought to be true, everything you held with deep respect in the world, and dashes it against the hard, shiny rocks of corporate industry. For Dan Kennedy, a failed musician who grew up in awe of Led Zeppelin, Kiss, and Iggy Pop, a job in the music industry seemed like the best way to pursue his passion for music. With high hopes of discovering America’s next great rock band, Kennedy instead finds himself tangled in the sticky web of the corporate pecking order, full of power plays and hard decisions about what kind of expensive picture frame to buy for your office.

Luckily for us, Kennedy survives his time at the major record label, emerging to tell a hilarious tale of many painfully awkward encounters and mishaps in his memoir Rock On. From fighting with a coworker over a chocolate chip muffin to organizing a gangster rap music video, Kennedy will have you laughing out loud at the sheer ridiculousness of the music industry. Kennedy also brings us closer to this world by interspersing humorous lists and self-composed lyrics between his anecdotes. He outlines the power structure of the office, telling us about “The Heavy Hitter” (“You’re making seven figures”), “Upper Management” (“You lurk in the same places; same corner offices, same executive washrooms”), “Glorified Middle Manager” (“you’re not making small talk with influential cohorts while urinating”), “Glorified Foot Soldier” (“you can’t manage anyone”), and “Real Foot Soldier” (“Who was there when, say, slow-jam diva Brandy needed some clothes brought to her hotel room in the snowstorm? . . . You! You’re the real deal, because you actually do something”).

Despite Kennedy’s ability to find the extraordinary humor in his workplace, his seeming aptitude to laugh it all off, there are many times in his story when he simply expresses wanting to fit in. For anyone who has felt the baffling desire to do well at a job you dislike, to impress coworkers in spite of your feelings for them, Kennedy’s contradictory feelings are understandable. Throughout the book, his passion and respect for music still prevail; he admits,

Sometimes I walk around the floors peeking in offices, like a tourist lost in a museum. You can’t help but feel how this is your last chance to see this. That none of the old-school mogul stuff is going to last much longer—a little slice of American pop culture that might’ve peaked and is now almost gone without a trace.

There is a bitter feeling of regret and loss beneath the humor of Rock On, because it is apparent to Kennedy that the days of Rush and Led Zeppelin are over. The industry now churns out identical pop stars, hip hop princesses, and angry rockers with manufactured lyrics and iconic wardrobes. This is not what Dan Kennedy signed up for.

Unfortunately, the everyday routine of work and the powerful draw of money can numb the mind to certain core values and beliefs. Kennedy finds himself sucked into this world, no longer finding it all that odd that well-paid executives sit around in meetings discussing a pop star’s hairstyle or listening to the new hit song being used in a women’s razor commercial. Throughout Rock On, you can really feel Kennedy’s internal battle between not wanting to sacrifice his ideals and wanting to succeed in the music industry.

At times, you may want to yell at him for throwing his values to the dust, but Kennedy is only human. “I know this stuff is all a big dumb lie,” he writes, “But I want to try for once in my life. . . I want everyone to think I’m a normal and successful man like the others.” Kennedy gives it to us the way it really happened—he admits feeling that compelling force asking him to sell his soul to the industry. In this way, Kennedy succeeds in crafting a multi-faceted book: his humor, often bitter and cynical, exposes the dangers of working in the corporate music industry. For a short time, Kennedy lives teetering on the edge of a bottomless pit of forsaken morals; he experiences the vapid void within which people sit around getting paid to create pop culture.

All of Kennedy’s feelings towards music and his job culminate in a fervent retelling of seeing Iggy Pop in concert. The energy of Iggy, “this fifty-six-year-old life force” bounding and jumping around the stage, and the audience holding middle fingers up to MTV ads, show Kennedy that there are still people out there who really love rock music. Jumping up onto his amps, Iggy shows just as much contempt for the music industry, “face to face with the industry suits up in the balcony” yelling “Jump down here you fat fucks! I dare you to jump! You won’t jump because you’re scared!” Later, Iggy goes so far as to scale the V.I.P. mezzanine, scattering the record executives’ tables and “complimentary Skyy vodka and cranberry” drinks everywhere. In this same spirit of rebellion, Rock On is Dan Kennedy’s way of redeeming himself, his big middle finger to the industry, his own destruction of the V.I.P. section.