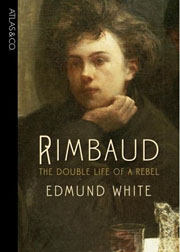 Modern art has no Great Disruptor like Arthur Rimbaud. Paul Valéry, who emulated him decades after his death, put a fine point on it when he wrote, “before Rimbaud, all poetry was written in the language of common sense.” From the sticks of Charleville, France he arrived—penniless, combative, and lice-infested—into a 19th-century Paris that didn’t know what to make of him, other than to note his piercing blue eyes.

Rimbaud pried open literature and revealed startling new possibilities. The poet’s prodigious mastery of form only aided him in obliterating traditional verse. Among his many achievements, according to Edmund White in this readable and absorbing critical biography, was the invention of the prose poem, a mode only previously glimpsed in the Book of Psalms.

Young Arthur’s method for these triumphs was a life of artistic mayhem that he famously described as a “total derangement of the senses.” The boy’s conduct was downright sociopathic. He outraged nearly everyone he met in Paris as the guest of the established poet Paul Verlaine. Both writers produced their best work during the destructive, absinthe-addled “domestic farce” that nearly killed them both.

Although Verlaine had ten years on Rimbaud, it was the younger poet who instigated their artistically rich (albeit morally bankrupt) escapades. Many letters indicate that Rimbaud emotionally blackmailed Verlaine into abandoning his wife and young child for drunken adventures in Belgium and London.

White’s account benefits from the author’s honest self-identification with his subject. A bashful Midwestern teenager, seduced by books, White could only dream of crashing through the literary world, inspiring the leading artists of the day to abandon their households and run away with him. But Rimbaud ran away from his deeds as a literary genius and homewrecker for a life as a marginally successful gunrunner in Africa. By the time of his death at 37, his books A Season in Hell and Illuminations were already gaining status as treasures of Western literature. Rimbaud himself, though, had long since repudiated this brilliant poetry, referring to it in correspondence as “filth.” That such a keystone contribution to modern literature seemed to emerge unbidden from the pen of a hellion offers proof that diligence and artistic development do not always measure up to the undisciplined, incoherent passions of youth.

The ill-starred magnificence of the Paris Commune invites comparison to Rimbaud’s meteoric career. Indeed, many scholars claim that the upheavals in Paris should be considered Rimbaud’s greatest inspiration. When the Imperial Army left Paris in 1871 to fight the Prussians, anarchists seized control of the capital and established a free city-state. Utopian decrees were giddily proclaimed, including the end to state subsidies of the Church. The revolutionaries also introduced mandatory public education to the Western world. But it was all summarily crushed two months later by the returning army, and many of the Commune’s idealistic initiatives were never implemented. Rimbaud sympathized deeply with the short-lived revolution. “Like the Communards,” White writes, “he was violently anticlerical. Like them, he mocked authority, the bourgeoisie, the deposed monarch.”

White, an influential gay writer and co-author of The Joy of Gay Sex, notes with particular interest the sexual precocity of the young poet, though he insists that Rimbaud’s homosexuality was not the source of his restlessness and dissatisfaction. White cites Wallace Fowlie’s assertion that gay romance, because it is free of procreative instincts, is fundamentally aesthetic and intellectual. This attitude leads him to disagree with Enid Starkie, author of the 1936 biography that for a long time was considered the authoritative English-language work on Rimbaud. Starkie extrapolates from a poem called “The Tortured Heart” that Rimbaud suffered a rape at the hands of Communards during one of his early escapes to Paris; she also insists that Rimbaud must have enjoyed the experience, since he later had a homosexual affair with Verlaine. White responds in his book that it’s second-rate Freudianism to attribute personality traits to some buried trauma, and that the historical evidence for some transformative assault is nonexistent; he theorizes it was a homophobic attempt to rationalize Rimbaud’s romance with Verlaine that led Starkie to concoct her rape narrative.

Given his turn, White paints Rimbaud’s sexuality as fluid but aggressive, and shows that he always dominated the older but less self-assured Verlaine. The upstart from the provinces had sought out Verlaine’s approval and idolized him as one of his favorite living poets. But soon after he sent the boy train fare to Paris, it was Verlaine who was drawing more inspiration from Rimbaud.

Verlaine’s character fascinates due to the gap between his strength as a poet and his weakness as a man. Relentlessly self-pitying, abusive, alcoholic, and indecisive, he recovered somewhat from his period with Rimbaud and regained a reputation as an important French writer. “If Rimbaud was the most experimental poet of his day,” White says, “then Verlaine was much more a lyric voice, someone whose superb verses were close to the delicate, rhyming patterns of song (indeed, Debussy set them to music), a poet of melancholy and shadows, of a fragile and intensely personal Catholicism, and of the springtime of love.” Of course, the debauched quality of his lived experience does not measure up to the elegant harmony of his poetry: “Verlaine was a survivor, though he was also a buffoon, lurching back and forth from men to women, from wine to absinthe, from hospital to prison to gutter.”

As for Rimbaud, his career did not survive his turbulent teen years. All the same, in the span from 1871-75, he seized control of modern literature. A Season in Hell seems to foresee the Industrial Revolution and the massive societal changes that it would herald, even appearing strangely in touch with the explosive developments of the 20th century. “What is extraordinary,” writes White, “is that in his brief writing career Rimbaud covered the whole history of poetry from Latin verse up through the Romantics and the Parnassians and the Symbolists on to the Surrealists, even before surrealism existed.”