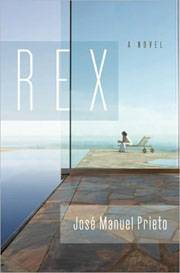 José Manuel Prieto’s Rex opens with the epigraph “Esse is percipi. /To be is to be perceived,” Bishop Berkeley’s famous dictum related to the sound trees make or don’t make when they fall in the forest. By the time we get deeply into the novel and are headed for its conclusion, we encounter the phrase again: “And in the same flash of insight that accompanied my recovered dignity I knew what heraldic device would best suit our House. A frank and pithy vindication of imposture: Esse est percipi.” Sharp readers will notice the misspelling of the epigraph, which includes Latin and English, along with the emphasis provided by italics.

Berkeley’s insight is related to the main plot line of Rex, in which the narrator has decided to re-invent his boss as the lost Czar of the Russians in order to help him and his family escape from the presumed revenge of the Russian mob—revenge for having duped them out of millions of dollars that were exchanged for fake diamonds. Rex, then, is a philosophical fiction that comes to us in the genre of the thriller, a noir novel mixed with questions of language, fabrication, and perception.

Prieto’s novel is narrated by Psellus, a young man who has been hired by Vasily and Nelly, expatriate Russians, to tutor their son Petya, who is the addressee of the entire book. We also encounter Batyk, a nefarious scientist and collaborator in the scheme to sell synthesized diamonds; the muscle of the Russian mob; and the beautiful people of Marbella, Spain, where the family has moved to exhibit their wealth but which also acts a kind of prison for them, since they are frightened of being murdered by those they have tricked.

Formally, Rex is divided into numbered “Commentaries,” and the first page opens with a reflection on language: “I’ve been reading it for years, the one Book. . . . Language, an aqueous thing, foundationless, a river of words. Yet how rapidly I sail along it, the mass of that river flowing beneath me: no mere suspension of sediment washed along by chance but the immense briny depths of a living liquid.” The “one Book,” with its scriptural echo, is here primarily Proust’s, but as Psellus narrates he includes a prodigious variety of other writers in his commentary. These include, but are not limited to, Flaubert, Faust, Nabokov, Kafka, Bernhard, Confucius, Diogenes, De Quincey, Chuang Tzu, Homer, and Cervantes.

The story progresses through a slowly unfolding baroque style of citation. Psellus, speaking to Petya, describes his life with the family, his falling in love with Nelly, the disturbing histories of his employers, and the life of Marbella just outside the gates of the house. But since the entire tale occurs within quotation marks, the plot never becomes gripping in and of itself—it’s always a self-conscious narrative about how language concocts the world and its meanings. Speaking of the functions of the library, whether of a scriptural or a Borgesian style, Psellus remarks that he has “come up with something entirely different: a circumference whose radius is infinite, a spherical construction, a bibliosphere that has its Ptolemaic center in every reader and makes room between its thin walls (no thicker than a page of the Bible) for all books, including this one, and all commentaries upon them.”

In the author’s note, Prieto notes that Rex is a non-realist autobiography “whose primary human theme is the strategies used to overcome the terrible experience of totalitarianism. Like me, my characters are survivors of the totalitarian catastrophe. Therefore, Rex can be considered a post-totalitarian novel, whose characters are all profoundly disturbed.” That may be, but even beyond the autobiographical and historical themes at work, there is always the question of whether esse is, actually, percipi, and how this formulation relates to all the truths of the czars, the revolutionaries, the murders, the mobs, the accumulation of ill-gotten gains, and the history of literature.