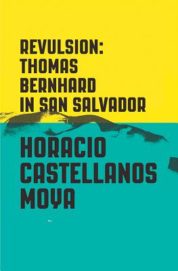 Readers who appreciate literature that ridicules intolerance and brutality will celebrate the appearance of Lee Klein’s translation of Revulsion: Thomas Bernhard in San Salvador—an essential text in the oeuvre of Honduran-born Salvadoran author Horacio Castellanos Moya—nineteen years after its first publication.

Having repatriated to Canada and changed his name to Thomas Bernhard (after the Austrian novelist) the Head of McGill University’s Art History Department, Edgardo Vega, returns to his hometown of San Salvador and stays with his brother, the proprietor of a successful chain of locksmith shops, so that he can execute their mother's last will and testament. Two weeks into his three-week visit, Vega has moved into a hotel to get away from his relatives, and spends a couple of hours with an acquaintance, a writer of “famished little stories” named Moya, at an establishment whose bartender plays Tchaikovsky and serves him two whiskeys daily, followed by glass after glass of mineral water—none of which brings on an attack of his colitis, unlike Salvadoran pilsner, cover bands, soccer players, and pretty much every other Salvadoran institution, custom, product, or norm he can think of.

The story—or rather, since Revulsion doesn't relate any incidents, the premise—of the book follows the plot of Bernhard’s 1986 novel Extinction, in which a man returns to Austria to tend to his family's affairs after receiving a telegram informing him of their deaths in a car crash. Meanwhile, Moya’s Vega disgorges his torrent of bile in the manner of the whole gamut of Bernhard protagonists: “It is a miserable culture, Moya, for which the written word doesn't have the least importance, it jumped from the most atrocious illiteracy to fascinate itself with the stupidity of television, a fatal jump, Moya, this culture, jumping over the written word, cleanly and simply sailing above the centuries in which humanity developed thanks to the written word, said Vega.” Paratactic phrases and clauses offset by commas are the speech units of this eighty-three-page series of discursive circles and tangents. It's as if the needle of one author got stuck in the grooves of the other. This text is a parodic homage, a neoclassical imitatio, a diverting throwback to High Modernism, serious fun.

Revulsion is Moya’s fifth book to be translated into English, and it's the second of those five in the original Spanish, which means that the Anglophone reader who is familiar with the work of this extraordinary writer can now go back and look ahead to his subsequent development, in prospective hindsight, and see how transformative this text proved to be in the years following its publication. In an afterword, Moya relates what happened when Revulsion came out: an unidentified man telephoned his mother twice and threatened his life—an occurrence of which there would be scant coverage in the press, “although it didn't lack a columnist who claimed that I had invented the threats to promote the book,” he recalls, “and that I wanted to imitate Salman Rushdie.”

Moya’s afterword directs our attention to the change his work underwent: while it's true that in Revulsion (1997) Vega left El Salvador wincing and sneering, he still went by choice, whereas Erasmo Aragón in The Dream of my Return (2013) and the anonymous narrator of Senselessness (2004) both flee for their lives, the former because he was employed at a news agency backed by guerillas, the latter because he wrote an article stating that El Salvador was the first Latin American country to have an African president. In She-Devil in the Mirror (2000) the photographer José Carlos and the reporter-turned-private-investigator Pepe Pindonga leave El Salvador for fear of retaliation for their work, and the journalist Rita Mena endures intimidation and assault at the hands of a politician’s bodyguards. In Tyrant Memory (2008) gossip has it that the pro-Nazi theosophist dictator Maximiliano Hernández Martínez has not charged the columnist and radio news editor Pericles with violating an anti-defamation law, imprisoning him for articles alleging that the tyrant engaged in unconstitutional activity to get reelected, but instead—much to the journalist’s chagrin—because of his falsely rumored membership in a group of coffee growers and bankers who oppose the regime. Judging from the available English translations, it seems that after Revulsion, the profession of journalism has ceased to be a cog in the state propaganda machine, as it had been in the preceding novel Dance with Snakes (1996), and instead becomes a perilous job that places writers in immediate danger because of their labor. Indeed, it’s difficult to avoid the inference that Moya doesn't attribute the death threats against him to the initiative of an isolated bloodthirsty coward, but to a coordinated abuse of power by the government of the Republic of El Salvador.

In large measure, the history of literature written in English is the history of its contact with other literatures, and within the mainstream of that tradition—much in the same way that Horacio Castellanos Moya has altered Hispanophone prose by imagining Thomas Bernhard in San Salvador writing in Spanish—Lee Klein has altered our prose by writing Revulsion the way Moya might have written it, if he had done so here and in English.