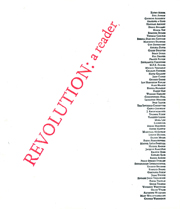 As the incessant, hyperactive global mediascape flickers and flashes with images of mass destruction, total annihilation, and pandemic, and institutions embrace zombie-ism as a kind of MO, all feeding a zeitgeist of Impending Doom, it’s difficult not to feel a sense of apocalypse fatigue, particularly when visions of the end-times are juxtaposed with the underexposed and very real apocalypses taking place around the world and within so many of us. In his 1991 book The Temporary Autonomous Zone (T.A.Z.) Hakim Bey writes, “I have come to despise the ‘End of the World” as an ideological icon held over my head by religion, state, & cultural milieu alike, as a reason for doing nothing.”

The word apocalypse derives from the Ancient Greek apokalupsis or “revelation,” a lifting of the veil. It’s easy to hear in revelation the word “revolution.” And perhaps at the core of apocalypse propaganda, if we pull aside its blockbuster Batmanly veil, is a fear of revelation, of revolution, of people actually doing something.

With Revolution: A Reader, editors Lisa Robertson and Matthew Stadler provide us with an antidote to end-times infantalization by giving us something to do. “This book is pragmatic,” they say in their introduction, and at the core of its function is a question of apprehension: “How will I recognize you? . . . How will we see the revolution beginning every day?” This recognition invites an ontological shift, one that can embody the transformation at work in movements and insurrections such as those in the Middle East, Europe, South America, and stateside via Occupy Wall Street and protests such as those in Wisconsin. Again from their introduction: “The change that we need to discover is already happening at every point in each of our lives. We are already in revolution, now, in the present, and every part of change, even infancy or death, is about to show us something completely new about collectivity and co-existence.”

Organized into five major sections—Beginning, Childhood, Education, Adulthood, and Death—this anthology (though I hesitate to use that term, given the market saturation and careerism it suggests) invites reflection on change as a corporeal phenomenon, one rooted in the major vicissitudes of life as we live and perceive it. While the selections themselves are enough to inspire years of further reading, Revolution concludes with a very useful annotated bibliography and way-finding text by independent scholar and poet David Brazil.

Revolution offers a provocative range of thinkers, outsiders, poets, activists from across the space-time continuum. From Lucretius’ philosophical poem on origins (On the Nature of Things) to Gertrude Stein’s “Composition as Explanation,” from Mahmoud Darwish’s Memory for Forgetfulness, written during the 1982 siege of Beirut, to iconoclast designer Vivienne Westwood’s play Active Resistance to Propaganda—and these examples just from the first section—Revolution spans genres and centuries in its exploration of perception, resistance, and co-existence. (In doing so, one of Revolution’s many uses could be as an alternative source text for composition courses, but more on its uses later.) Others present include Kathy Acker, Arakawa + Gins, Dodie Bellamy, Angela Davis, Gilles Deleuze, Shulamith Firestone, Jean Genet, Harry Hay, Langston Hughes, Ivan Illich, J. Krishnamurti, Mina Loy, Marshall McLuhan, Eileen Myles, Miguel León-Portilla, Edward Said, Percy Bysshe Shelley, Valerie Solanas, Oscar Wilde, and Mary Wollstonecraft (the mother of Frankenstein’s author). And this is just a partial list.

Over 1,154 pages, Revolution explores, as its editors express, a “small terrain,” albeit a thrilling one. One of the pleasures involved in reading Revolution or learning how to read it, is the opportunity to interact with Robertson’s and Stadler’s annotations that guide readers through the book. It’s hard to imagine two better guides to our incipient revolutions than these two. Far from dry academic explanations, their annotations function as a kind of imaginative meta-text of the margins, asking questions of the text, connecting the text to other texts in the reader and beyond, improvising and riffing off the text, and, in some cases, disagreeing with certain conclusions or providing cues for how to interact with the book in its entirety.

For example, alongside Christopher Hill’s assertion “The words used by the men of the 1640s to describe their political actions fall very short of what they were actually doing,” there is this from Stadler in the margins: “Words don’t ‘fall short’ so much as they are something else entirely. Arendt develops this richly (below). Just as words never fall short, nor do they ever hit a mark, exactly. Think of this reader as a round of buckshot inscribing a halo of holes around the absent thing, yielding a profile, a shape, a recognition.” Or, here’s Lisa Robertson alongside Edward Said’s description of a politics of identity upon which “both the nationalism in whose name France subjugated Algeria, and the nationalism in whose name the Algerians resisted France since 1830”: “Identity is very ungenerous and completely non-erotic. If we can’t live without striving to lose every aspect of our putative self-knowledge in our search for the other, there is no hope for relationship, and hence for politics. It is this crucial loss that the regulatory state would prevent. In revolution, we must become unrecognizable to ourselves, devested.”

Often the annotations converse with each other. One of my favorite moments of this back-and-forth comes in the margins of Giorgio Agamben’s “The Face”:

Robertson: “Is Agamben saying . . . that the earth is Satan’s butt hole? Would that make the stars his nipples? And is that a problem? What a magnificent cosmology!”

Stadler: “I want to kiss it! I’m reminded of the profusion of ass-kissing angels, apes, and devils, butt-trumpet blowing beasts that filled the margins of illuminated Medieval prayer books. Now there was a playground, no less central to living for its place at the margins of the text. Say, that’s where we are, isn’t it?”

A review of this book would be incomplete without mentioning the qualities of the physical book—despite its considerable length, it’s a highly portable, softbound, nearly square object with what I want to call onion paper pages, like Bible pages. Then beyond the book, there iswww.revolutionreader.com, where readers can purchase the book, read it free online (and add annotations), find or post information on reading groups discussing the book, and/or buy it for libraries at a discount. At our reading group’s discussion of Revolution, poet Aaron Apps commented that we should find a way to replace hotel nightstand Bibles with Revolution, an instantly likeable idea—partly because it supplants one political text with another, but also because Revolution is a book we should sleep with, kiss and carry close to our bodies, stain with our own dirty whorls. It’s also a book we should give away to strangers, leave behind in bathroom stalls, replace the Sky Malls with on airplanes, fling into bank lobbies, distribute like phonebooks, and/or gift to teenagers on their eighteenth birthdays. In other words, having extra copies on-hand is recommended.