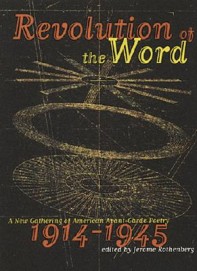 Why reissue a twenty-five year old anthology of mostly American avant garde poetry written between the World Wars? Beyond the first answer—that history needs occasional blood transfusions—perhaps a more convincing answer is that we're better able in 1998 to appreciate this book. If it was strangely prescient of the paths poetry took into the early '70s, it's even more accurate now.

Editor Jerome Rothenberg, himself an insurgent poet of note, works hard to be a canon-breaker and set this volume against the mainstream strains of Modernism, especially those that led to the dominance of "academic middle-grounders" writing under the New Criticism banner by mid-century (Tate, Ransom, Lowell, Wilbur, etc.). It becomes apparent that beneath Modernism was an even more radical impulse, a sub-modernism whose children rose up into Black Mountaineers, Beats, New York Schoolers, and other risk-takers, some of whom found their first home in Donald Allen's monumental collection, The New American Poetry (1960).

Despite this contrarian stance, Rothenberg does include some household names, such as Cummings, Eliot, Moore, Pound, Sandburg, Stevens, and Williams. But the selections of their work are daringly unconventional, hidden pockets of rebel slough among the chestnut corpus. And in his headnotes Rothenberg often does damage to the institutionalized greatness of said masters, as when he lands this bittersweet jab: "If Eliot himself had to rely on literature & church as props against disorder, the new intuition of poetic origins that he helped develop has led to a more open view of the universally human."

Other poets included are those brilliant underdogs whose reputations have grown in retrospect, like Mina Loy, George Oppen, Laura (Riding) Jackson, and Louis Zukofsky. The final third of the pie consists of those who remain in relative obscurity, many represented by surprisingly satisfying work; these sleepers include Walter Conrad Arensberg, Kenneth Fearing, Charles Henri Ford, and Walter Lowenfels. Here, for example, is a lovely nugget of weirdness by Ford: "I should like to pick you up, as if you were a woman of water, / hold you against the light and see your veins flow / with fishes; reveal the animal-flowers that rise / nightlike beneath your eyes."

On the whole, Rothenberg admirably includes—consistently and regardless of the author's fame—excellent poetry (and some prose) that isn't often anthologized elsewhere. This is a grand achievement, especially since he favors work whose revolutionary fervor can be dangerously obvious on the page: lines sprawling everywhere, bold print leaping at the retinas, rules of punctuation and grammar thrown out the window. As he asserts in the introduction: "The thing was to get off on it, to hear one's mind, learn one's own voice. But the message clear & simple was to move. To change. To create one's self & thus one's poetry. A process." Revolution of the Word could've been a self-indulgent show of bells and firecrackers, but is instead a sophisticated selection of subtle linguistic constructions, an amazement delivery-system.