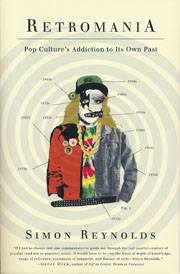 A lack of inherent value characterizes the music industry. As in the fashion industry, novelty reigns; indeed, “fashion—a machinery for creating cultural capital and then, with incredible speed, stripping it of value and dumping the stock—permeates everything.” Part polemic, part survey of the present-day musical landscape, Simon Reynolds'sRetromania bemoans the current state of affairs in pop music, in which a constant recycling of the past prevents the emergence of anything truly new.

At times, Reynolds's critique of present-day music resembles that leveled at the “decadent” art of fin de siècle Europe. The last years of the 19th century saw European society struggling with a new social order. Gone were the old pillars of church and nobility, and in their place was a capitalist class system in which social roles were defined not by birth but rather by profession. This new order led to fragmentation. As art came to be seen as just another profession, the artist found his role limited. His subject was no longer the totality of life itself, but rather its depiction through art. Figures like the dandy and the flâneur became objects of public scorn; the decadent artist was seen as a dilettante, a shallow aesthete whose sterile art drew parasitically from what came before, preserving its outward appearance but lacking its vitality.

This is an imperfect comparison. Reynolds insists on pop music's adherence to “the modernist credo: art should constantly push forward into new territory, reacting against its own immediate predecessors in violent gestures of severance.” Fin de siècle artists yearned for the stability they saw expressed in the work of the old masters. For Reynolds, however, the past fifty years of pop music are defined by its practitioners' drive for upheaval, for constant innovation. Where artists at the end of the 19th century struggled to maintain vitality in classical forms, today's musicians draw indiscriminately from old forms in hopes of creating something new.

There follows what Reynolds, along with others, calls a “nostalgia for the future,” a sense of “not feeling at home in the here-and-now, a sensation of alienation.” Applied to the present, this feeling is bound up with the odd timeless quality of the current moment. Unsatisfied with our version of the present, we yearn for the dissatisfaction of other eras, when the sense people had of their own era was unique enough to allow them to envision an alternative.

In examining pop culture's relationship to nostalgia, Reynolds draws from the work of Fred Davis, citing his claim that “bygone mass culture increasingly superseded political events like wars and elections as the warp-and-weft of generational memory.” It seems a logical extension of Davis's argument to say that politics plays an ever-diminishing role not only in what defines a generation collectively, but also in how individuals think of themselves. The extent to which members of the World War II generation see themselves reflected in the political events of the 1940s is likely greater than that to which Baby Boomers identify with, say, the Vietnam War; boomers identify instead with the cultural events of that decade, such as the folk revival or the hippie movement.

What complicates matters is the fact that these cultural events were in part a reaction to politics. Reynolds reveals the key problem of our mania for revivalism: that in mining the past for inspiration, we tend to remove cultural artifacts from the context in which they had meaning. If culture has assumed Davis's role as the key repository of generational and individual identity, then to remove the products of culture from their original context—to take them out of time—would create social upheaval on par with what produced fin de siècle decadence. Today's version of the dandy, the hipster, has unlimited access to aesthetic artifacts, cultural capital with which to form an identity. Robbed of their original meanings, however, the value of these artifacts, and thus the hipster's sense of self-worth, lies only in novelty.

So Reynolds paints a bleak picture: 19th-century decadence laid the groundwork for the renewal of modernism, but what is to come after the present moment, when the call for innovation persists only to be answered with ever-diminishing results? After the decadence mourned the death of an old order, modernism cleared away the ruins. Marching ever-onward into the future, pop music has left countless abandoned structures in its wake. It remains to be seen if some of them are salvageable.