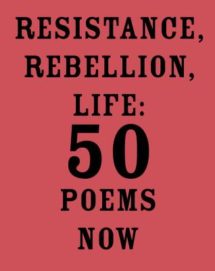 "I must confess to having disliked political poetry and 'protest' poetry for much of my reading life," confesses editor Amit Majmudar in his candid introduction to this collection. It was not until 9/11, Majmudar explains, that he woke from his apolitical "stupor." His anthology joins others inspired by President Trump, including Resist Much / Obey Little: Inaugural Poems to the Resistance (Spuyten Duyvil) and Poems for Political Disaster (Boston Review).

Suffice it to say that the poets in the book dislike Donald Trump. "Charlatan, huckster, grifter, / fraud," is how David Breskin opens his poem "Mountebank." In "They Call Them Blue My Mind," Erica Dawson counters candidate Trump's infamous "grab them by the pussy" comment: "to sew my labia closed, using a butterfly // loop and Pantone's Black 7 thread." Supporters of the president will probably not be reading this book.

Readers may wonder at times, though, just what is being resisted and rebelled against. There are poems on Emmitt Till, the security state, immigration, 9/11, Captain America, and one on beavers. This variation in topic is both the great strength and weakness of the anthology-it offers variety, but it also makes the book feel unfocused. That said, there are some gems here. Maggie Smith's "Good Bones," which went viral after the Orlando shooting, shares her anxiety on what to keep from her children: "Life is short and the world / is at least half terrible, and for every kind / stranger, there is one who would break you." Bob Hicok's "We've come a long way toward getting nowhere" mocks anti-Semitism by focusing on Eve, a Jewish woman:

after repeated inspection, I can attest
that underneath it all, she, like many
of the people you know or are,
is ticklish, wrinkly, sexy, scarred-
since Jews really are relentless
when it comes to being human.

Jane Hirshfield's "Let Them Not Say," deals powerfully with personal responsibility. Kevin Young's "Money Road" a meditation on Money, Mississippi, where Emmett Till was brutally slain shows us how our nation's history haunts us: "this cursed earth. / Or is it cussed? I don't / yet know. Let the cold keep // still your bones."