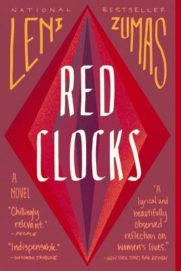 Lena Zumas’s Red Clocks brilliantly combines the forms of speculative fiction and thriller to tell the intertwined stories of four women in an Oregon fishing town. Two years previously the United States Congress had banned abortion with the Personhood Amendment, and a second law, Every Child Needs Two, will go into effect in three months banning single people from adopting.

These new laws and the repressive culture they mirror make the four women of Newville desperate. Ro is a 42-year-old single woman and public school teacher who wants a child so much she’s undergoing fertility treatments. Mattie, Ro’s student, finds herself pregnant at fifteen and is desperate for an abortion, but the anti-abortion law says women who try to get abortions should be imprisoned. Susan didn’t finish her final year of law school when she got pregnant; she married and had a second child, but now can’t stand her marriage and life as a stay-at-home mother.

The fourth woman, Gin, is a non-conformist healer who lives alone outside Newville using her herbs to mend people. When the townspeople became frightened of a seaweed plague that harms the marine life on which Newville economically depends, and then of twelve sperm whales that run aground, they blame both events on Gin, whom they call a “witch.” Newville is known as the “whale-watching capital of the American West"; the town depends on tourists who come to see live whales, not dead ones.

The novel brilliantly dramatizes how the four women take heart from the history of rebellious women. Gin’s aunt Temple tells her that in 18th-century Massachusetts, her ancestor Goody Hallett fell in love with a pirate who deserted her when she became pregnant. The villagers called Goody a witch who “rode on the backs of whales” and who suffocated her baby; in reality she gave the baby to a farmer’s wife to raise and lived by herself in the forest, foreshadowing her descendent Gin’s independence and courage. Ro praises Gin’s remedies as “thousands of years in the making, fine-tuned by women in the dark creases of history, helping each other.” Also, Ro is writing a biography of Eivor Minervudottir, a pioneering 19th-century polar explorer; short passages from Ro’s biography come between the chapters, as if to remind the readers of heroic women who stand behind us.

The heroism of the past is needed in the novel’s present when Gin is arrested, jailed, and put on trial for conspiracy to commit murder: she is charged with helping the high school principal’s wife abort. Mrs. Fivey was regularly beaten up by her husband, who threw her down the stairs, but Mr. Fivey told the police that Gin’s abortion potion caused Mrs. Fivey’s fall. Zumas compares the historical bad old days, when they burned witches, to the novel’s present, when the government wants to imprison Gin for the abortion she didn’t do. During the trial, Mattie, Ro, and Susan discover their ability to act courageously as they watch Gin do the same; one by one these women stand up for each other and for themselves.

Red Clocks shows how the women’s rebellion leads to their getting justice for Gin, getting Mr. Fivey fired from his job, and getting freedom for themselves. Gin returns to her forest home, where she feels alive in her closeness to the “bleat of the owl, chirp of the bat, squeak of the ghost of the varying hare.” Mattie touches a whale’s eye on the beach as if she’s touched freedom, and plans to go on to study marine biology. And as Ro comes to the end of writing her biography of Minervudottir, she discovers a wealth of new freedoms in her life: can she become a writer? Or a school principal to replace Mr. Fivey? Or a foster mom? Zumas asks the reader to fight for a world in which women have choices.