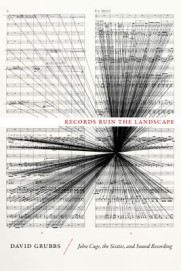 In case you missed the headline, yet another music streaming service was launched this spring. Called Tidal, it differentiates itself from similar platforms like Spotify and Pandora Internet Radio by the quality of the recordings and exclusive access to new work from musicians. Rap mogul Jay Z, French discobots Daft Punk, and Madonna are just a few of Tidal’s many high profile backers. In an unspoken way, Tidal bridges two times: the heady nights of the hi-fi analog era and the everything-on-demand fire sale of the digital morning. It underscores how the way we listen to music has changed in a half-century—and that now, both ways are the only way we want it.

The tension between the ever-righteous vinyl shop and the ever-changing online marketplace makes David Grubbs’s recent Records Ruin the Landscape such a timely and interesting work of cultural history and analysis. Specifically examining the disruptive legacy of 1960s experimental musicians and classical composers like John Cage, Grubbs takes a long look at changes in how music has been conceived, written, performed, and recorded in light of the passage of time and development of new technologies related to the listening experience. “Given emerging media and related shifts in listening practices and access to documentation,” writes Grubbs,

the ongoing conversation about experimental music will continue to focus on the mediation of recorded sound and its distribution, whether in material or digital culture. These histories will remain, like landscape, successions of perspectives—and, in all likelihood, perspectives mediated through forms unfamiliar to contemporary practice.

Echoing Marshall McLuhan’s dictum that the medium is the message, Grubbs makes a compelling case that the ways we listen to our favorite Jay Z album, a Cagean prepared piano sonata, or some other genre that hasn’t been dreamed up yet has an incredible impact on how we evaluate, remember, and present those sounds to future generations of musicheads.

Lucky for living musicheads, access to recorded sound has been thoroughly democratized, and we now live with the opportunity for near-infinite media consumption. The progression from LP to cheaply reproducible compact disc opened the music listening public to a wide array of until-then inaccessible archival recordings. The advent of the MP3 and eventually online streaming services has widened that access further. Anyone with a library card and a basic understanding of Google has near-instant access to 6,000 years of the most esoteric human cultural production. As of this writing, more than thirty million songs are available to listen to for free on Spotify, with 20,000 more tracks added every single day.

Contrast this brave new world with the glory days of avant-garde music. Most of that scene’s participants—whether as artist or audience—lived in certain neighborhoods of New York City, Berlin, or London. It was an exclusive clique with an even more exclusive vocabulary. Performances were frequent but held in underground venues. Recordings of this music were scarce and comparably expensive. And listeners’ ears hadn’t yet adjusted to the wild improvisation of free jazz, rampant genre coupling, or the palette of sounds that were forcing their way into the traditional understanding of “music.”

Enter the ringleader of the movement, John Cage. He was one of modern music’s most divisive innovators, an eccentric mushroom forager, and outspoken hater of records. In fact, the title of Grubbs’ book is taken from a conversation in which he likened a recording of music to a postcard: pretty and sentimental, but a terribly inaccurate experience of the landscape pictured. “Repetition has always been experimental musicians’ most fundamental objection to recordings:” writes Grubbs of this Cagean tension; “they are not true to the nature of performance because you can listen again and again.” If a postcard is a frame to look at a landscape repeatedly, think of the idyllic sunset behind the Italian mountain as the light that obscures the old silver mine where local police stamped out a bloody labor strike. You only see the perfect, untrue sunset.

Cage’s anxiety hinges on two competing ideas about the experience of music (especially the experimental variety). First, that a composition or improvisational arrangement will by nature never be played the same way twice. Thus, it should be recorded as often as possible to tease out the various manifestations that loose instructions can generate. The second and competing notion is that because the composition encourages no fixed representation, there shouldn’t be a fixed representation. No recording, no “postcard.” Ever. Instead, the compositions are meant only to be experienced live—and maybe not for the benefit of the listener.

A perfect example of this tension might be found in the work of La Monte Young, an admirer of Cage. Composition 1960 #10 (To Bob Morris), for instance, eschews the regular notation one expects from a composition and instead instructs the player of the piece to “Draw a straight line / and follow it.” Or consider another, Piano Piece for David Tudor #1:

Bring a bale of hay and a bucket of water onto the stage for the piano to eat and drink. The performer may then feed the piano or leave it to eat by itself. If the former, the piece is over after the piano has been fed. If the latter, it is over after the piano eats or decides not to. (An Anthology of Chance Operations, La Monte Young, published by L. Young & J. MacLow, 1963, Bronx, NY, p. 117)

How exactly does one draw a straight line with a viola? And what is the sound of a hungry piano? With such loose guidelines, an archive of various interpretations would be both fascinating and amusing to sift through. Their inherent elements of improvisation and performance art encourage endless possibility and creativity. Yet the intensity, novelty, and sheer thrill of audience immersion and passive participation in such improvisation are lost in a stray MP3 or grainy YouTube clip.

Additionally, by recording music, more than just the experiential thrill of its original performance deteriorates over time. Context gets fuzzy too. An easy mistake with increasing access to historic music is to forget how obscure those recordings and information about them were in the past. Grubbs provides a perfect example in a little-known punk album by Henry Flynt and the Insurrectionists’ called I Don’t Wanna. (Flynt is best remembered, if remembered at all, for genre-bending experiments such as fusing Indian classical music with Deep South hillbilly fiddle.) The album has the napalm-hot vitriol of punk with lyrics deriding foreign policy, the Draft, and a national shift toward conservative groupthink. It seems like a perfect cultural artifact of the Vietnam era, and it is. But the only problem is that it wasn’t made public until 2004. “A listener can easily forget that this music went unheard for decades in spite of its status as a bracing artifact of the year 1966,” writes Grubbs. “This disorienting listening experience—what do you mean that people weren’t talking about this album in 1966?—points to anachronisms that often accompany the reception of archival releases.”

Anachronisms like the one described above are increasingly unavoidable, as new and old fans now find these works most readily via online archives and streaming platforms. Repositories like UbuWeb and the Database of Recorded American Music fill in the gaps more popular services miss. The boons and challenges of the information age apply to listeners too, especially its effortless ability to overwhelm. After sorting through hundreds of hours of archival music, for pleasure and research on this book, Grubbs writes (with a more than a hint of nostalgia), “There’s something quaintly reassuring and reorienting and of a human scale about touching bottom, about experiencing an archive—be it that of an individual composer or musician or of an electronic-music studio or radio show—in the fullness of its contours. . . . don’t expect this moment to come again.” While access to music widens, it becomes more challenging to connect individual recordings to a narrative chronology or individual tones from sonic innovation. Archives, despite advances that enable the storage of more information, are losing some of their usefulness.

Grubbs draws on Kenneth Goldsmith, founder of the online archive UbuWeb, for a number of insights, including these choice words about radical access to digital media: “Democracy is fine for YouTube, but it’s generally a recipe for disaster when it comes to art.” Grubbs also quotes visual artist Jasper Johns, who said, “The best criticism of a painting is to put another painting next to it.” These two quips presented side by side show the challenges and opportunity of reconsidering the work of fifty years ago with the tools of the present.

Records Ruin the Landscape is level throughout. Grubbs’ concerns of oversaturation are balanced against optimism for the omnivorous ears of new listeners. But his careful consideration of and deep research into the subject matter is full of implications, not just for experimental music geeks, but also for the genre’s practitioners, academics, and the art intelligentsia. The current music listening environment is increasingly like a tourist shop beneath an Italian mountain. Inside, there are thousands of postcards to consider, and outside, the sun is beautifully setting. Where do we look?