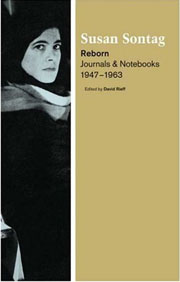 Writer and activist Susan Sontag (1933–2004) was an uncommonly visible and telegenic public intellectual. When she died in 2004, Sontag left behind a large and varied body of work, a tribute to her myriad faculties and interests. Her journals and notebooks, recently made public by her son, David Rieff, reveal that Sontag was similarly prolific in chronicling her private life. Reborn follows Sontag from the age of fourteen, a precocious adolescent living in Los Angeles with her mother and stepfather, until the age of thirty, when she was beginning to establish herself as a writer and lecturer in New York. The collection, the first of a projected three volumes, will thrill any admirer of Sontag’s work.

Sontag’s writings reveal a “besotted aesthete” in the making. From an early age, Sontag gorges herself on culture with a staggering sense of urgency and destiny. Notable aspects of Sontag’s prose style—her penchant for lists, notes, and dialectic—emerge even in her teenage years. Similarly, we can see some of the essays that catapulted Sontag into intellectual notoriety ("Against Interpretation"; "On Style") taking shape in the pages of her notebooks. But what is most enthralling is the glimpse we are given into her private life.

The lacunae in Sontag’s journals are often as intriguing as their content. A terse, one-line entry announces her engagement, at the age of sixteen, to sociology professor Philip Rieff, who she met while a student at the University of Chicago. Far from the writings of a giddy fiancée, the next mention of Rieff comes a month later with the foreboding entry of January 3, 1950: “I marry Philip with full consciousness and fear of my will toward self-destructiveness.”

The journals from the early years on Sontag’s marriage (1951–1952), as well as the birth of her son, David, are missing entirely from the collection. Whether they were lost or disposed of remains unclear. But Sontag turns a detached eye on her early domestic life, unpacking conjugality in a series of “notes on marriage.” After leaving Rieff in 1957 to pursue graduate work in philosophy at Oxford, Sontag continues to reveal her thoughts on marriage obliquely. "Lovers fight with knives and whips," Sontag writes in 1958, "husbands and wives with poisoned marshmallows, sleeping pills, and wet blankets."

Sontag’s more voluptuous reflections are reserved for her lesbian affairs, both as a young undergraduate in Berkeley and later, following the collapse of her marriage, in Paris and New York. These later entries expose in Sontag discomfiting feet of clay as she writes, lovelorn, about her inadequacies in bed. Sontag’s frankness is striking yet in perfect concord with her persona.

Like marriage, Sontag regards motherhood cerebrally. After her son tells Sontag, at the age of four, that he sees Jesus on the cross when he closes his eyes, she prescribes Homer as a corrective: “The best way to divert these morbid individualized religious fantasies is to overwhelm them by the impersonal Homeric bloodbath,” she muses. “Paganize his tender spirit . . .”

The title—which refers to a note written on the cover page of one of her notebooks in 1949: “I AM REBORN IN THE TIME RETOLD IN THIS NOTEBOOK”—communicates Sontag’s willful transformation. Her notebooks, Sontag reflects in Paris in 1957, play an integral role in this self-creation. “In the journal I do not just express myself more openly than I could do to any other person; I create myself,” Sontag writes. “The journal is a vehicle for my sense of selfhood.”