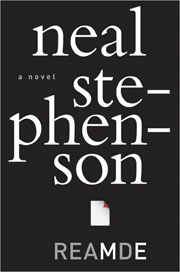 Neal Stephenson is a rare breed of writer. His early novels—most notably Snow Crash—helped found the cyberpunk genre and gave us a dystopian vision of an ultra-capitalist future, one which included a virtual universe not very different from the online multiplayer video games that have become ordinary in the twenty years since. He has set novels in World War II, 17th-century Europe, and in alternate worlds where cloistered academics debate quantum realities. But however surprising his latest choice of setting or subject, his celebration of geekery remains consistent. His astonishing talent is to take subjects that only a geek could love (the birth of the stock market, mine engineering, cryptology, virtual geology) and work them into books you are simply unable to put down.

If you avoid science fiction because you think it’s more about clever ideas and less about a good reading experience, embrace your inner geek and pick up Reamde. Stephenson’s prose is conversational and funny with a clear voice. While some of his novels take breaks from their story to perform an exhaustive exploration of a specific subject or idea, this one focuses entirely on the action at hand. The lack of learning may be noticeable to long-time Stephenson readers—unlike many of his works, this book never feels like it really stretches the brain—but it keeps the pace up, keeps you interested, and keeps you engaged with its world very much like a video game.

Reamde tells the story of Richard, the billionaire founder of a World of Warcraft-style online game, and his adopted niece Zula, an Eritrean-born Iowa farm girl who ends up embroiled with the Russian mob and then jihadists due to poor taste in boyfriends. Along the way we get a British spy, a Russian hit man, a teenaged Chinese videogamer, a Hungarian hacker, and others. The action rarely slows down and yet it never gets boring the way a three-hour action movie inevitably does (for those who read the hefty novels in Stephenson’s Baroque Cycle and skimmed until you got to the parts with pirates, this book’s for you). As opposed to Snow Crash, in which virtual reality is a large part of the story, Stephenson has tried to write a story that takes place in a video-game-like world.

To outsiders, video games can seem inconsequential. You can kill or be killed, gain and lose money or power, and usually resume playing almost as though nothing has happened. Characters might have a lot of stuff—magic swords, invisibility potions, really big guns—but in an absence of personality, it’s hard to empathize with them. Those of us for whom suspension of disbelief is more of a challenge may feel like video game worlds, at least the fantasy-themed ones, are just too foreign to enter—we need a thread of common experience to hold our attention.

In Reamde, Stephenson turns each of these assumptions on its head. He gives us the high fantasy world of T’Rain, the online game in the story, but it is mostly a background reference for the rest of the novel. The real-world characters that surround it play the roles you’d find in a game like T’Rain. We meet computer programmers who act like wizards, scrying for information in server logs and IP addresses. We search for a band of Chinese game-players who make real money by mining for virtual gold (there is, in fact, a huge economy of young Asians who work in sweatshops where they play games in order to sell virtual items to other players—something Stephenson brings to light with this novel). We see jihadist suicide bombers, whose obsessive devotion to their cause and unquestioning embrace of violence show us what a Warrior class might actually look like.

Stephenson gleefully sprinkles video game touches throughout the novel. There are a lot of guns and ammunition, which present themselves the way they might in a game—characters find them or take them from each other—and we pay great attention to the way they work (Is it a long-range gun? Automatic? Shotgun? Is there enough ammunition remaining? Is it heavy? How does a character’s breathing affect aim?). Most of the characters start with nothing and have to find what they need in their travels—and many of those items might seem useless but come in handy for solving a later problem. As in a video game, there are overarching goals and enemies but also lots of smaller situations that stand in the way and demand resolution before the characters can move on.

Watching these is where a lot of the fun happens. I don’t want to give the impression that this book is formulaic—an obvious danger when writing a game-like novel—because it’s not. Stephenson avoids that pitfall by giving us fully dimensional and generally realistic (if, on occasion, a little too competent) characters who solve problems creatively, but are not superhuman. They have to eat, and go to the bathroom, and do not already know how to use their weapons. They get scared, and their plans backfire, and they make mistakes; they may get in dramatic fights, but they have bruises afterwards. It is easy to imagine yourself as any one of them, which makes the story compelling and entertaining.

If you’re looking for something you’ve truly never seen before, try one of Neal Stephenson’s other novels. If you dream of spending several solid days in front of the Playstation this winter, remember that you don’t need a controller, a screen, or a vacation for Reamde.