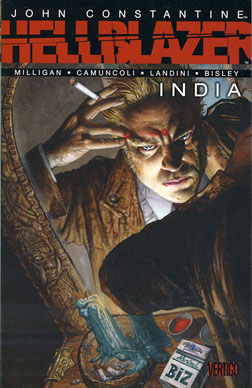 While it is generally billed as a horror comic, the enduring series John Constantine, Hellblazer can more productively be read as a lengthy treatise on the terrors of the real. The most recent volume of collected issues bears this out; India takes our hero, the working-class Liverpool mage of the title, from Brixton to Mumbai, where in addition to certain demonic or otherwise otherworldly entities, he confronts the nastier aspects of the human world, most notably the Victorian colonialist project, predicated on racist assumptions and fueled by fears and fantasies about sexual mores, and the conservative political project, expressed by Margaret Thatcher in the rhetoric of religion (Francis of Assisi, no less) retooled to echo totalitarianism: “Where there is discord, may we bring harmony.”

John Constantine, who in a famous plot thread raised his middle finger to Satan, is no Tory, however, nor is he the sort of Brit to go mooning over the lost era of empire. He is, in fact, a modern fellow, risen from a hardscrabble youth of Austerity Days through the adolescent rage of punk to the maturing wisdom of just how little all the screaming means in the face of the status quo—exemplified by the aggression in the Falklands, say, or a Prime Minister who denies the existence of such a thing as society. Constantine emerges, too, from the deep texture of the United Kingdom, land of Glastonbury and Arthurian romance, of Aleister Crowley and Sir James Frazer, where pre-Christian paganism is kept alive in the iconography above the church doors and in various village festivals. Visually, Constantine resembles certain characters in A.E. Waite’s tarot deck (the blonde scoundrel collecting swords from the field of slaughter, for instance), as well as the blue-suited Ronald Eyre of BBC’s world religions program The Long Search. Another British predecessor deserves mention, too, as Constantine has more than a few things in common (trench coat, knack for synchronicity) with the mysterious traveler in the call box on Doctor Who.

As the series’ title indicates, our chain-smoking anti-hero makes fairly frequent trips beyond the mortal veil. Heaven, Hell—these are places he blazes through, true enough, complaining about what the walls of wailing meat do to his Silk Cuts. Yet at its best, this series is concerned with human instantiations of paradise—effervescent, temporal, fleeting—and with the circles of torture and horror and cruelty that humans create for their fellows. In an early Jamie Delano script, having cast and conjured and all that, Constantine is left hanging upside down in Hell, staring for hours at the television coverage of the 1987 UK General Election. In another classic Hellblazer storyline, Garth Ennis’s Dangerous Habits, Constantine takes the tube to Westminster and stands on the bridge glaring at Parliament while preparing to cheat death from lung cancer by tricking the ruling hierarchy of Hell. “I want you to know it was always about you,” he says; “Not the magic or the demons or anything. You. Your power’s just like magic, ‘cause it doesn’t exist unless enough people believe in it. In a way that’s what I’ve been fighting all these years. Just belief. All I ever wanted was for the world to be free of your kind, whether you were here in Parliament, or in Senate or junta or Hell or Heaven.” 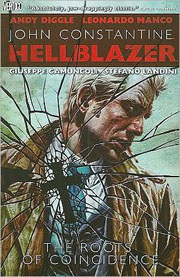 The character of Constantine first appeared in Alan Moore’s run onSwamp Thing, but it’s in the earliest Hellblazer issues, starting with the initial Delano stories collected in Original Sins, wherein the atmosphere is perfected. Here, horror is conveyed by Thatcher’s victory and the rise of money-hungry yuppies, waves of anti-immigrant violence, skinheads and neo-Nazis and assorted football hooligans, the specter of AIDS and the threat of nuclear energy and nuclear war, televangelism and right-wing religious fervor. The first literal demon to grace the pages of Hellblazer is Mnemoth, a hunger spirit that drives an old mate of Constantine’s to start mixing insect bits with the heroin in his syringe, a priest in New York to gnaw on his church’s crucifix, a bodybuilder to take bites from his own body . . . as Delano and his cohort of artists capably illustrate, the thing about Hell is that it’s allegory already, all the way down. Later stories explore the deviant desires of the aristocracy, America’s unsettled relationship with Vietnam, clerical abuse, media distortion, race-power ideologies—a whole slew of very real-world horrors, augmented with the odd winged demon or the decade-old abortion that manifests in the back of the closet and goes bump in the night.

Constantine, a very flawed and fallible man, helps maintain the series’ grounding in reality. What he’s best at isn’t passive scrying or casting binding spells, but rather, to put it bluntly, lying—or rather being a liar, for the character of Constantine presents the con-man’s art as an ontological state. He’s not so goodwith people, but he’s good at using them. There’s an odd book read now and again—Leviticus Infernal or some grimoire, a suppressed gospel swiped from the Vatican’s Black Library—but “down the pub” is where most of the background research gets done, sweetly gabbing some incautious soul into spilling all sorts of relevant secrets. He might mutter a curse, inflicting erectile dysfunction and lack of bowel control on some random tosser, but it is Constantine’s own cursedness that drives the action forward and maintains sympathy on the part of the reader. This is a title wherein the supernatural is commonplace, but unlike more garish fantasy comics, the emphasis here is on the quotidian part of the equation; when the veil between worlds is torn open, both sides are shown to be shoddy mirrors of each other. One of the more miraculous manifestations of the Swamp Thing’s powers in these pages, for instance, comes not in the form of some kind of magic battle but rather as an overabundance of flowers and foliage at the tomb of someone dear to Constantine. And this is what happens to those close to our hero—they end up dead, though they don’t necessarily go away, or stop suffering.

The ghosts that populate Hellblazer tend to have a bone to pick, and usually with Constantine. A kind of chorus of dead friends follows him around, indicting, accusing—guilt made apparitional flesh—they’re all dead, and it’s all his fault. The most frequent description of Constantine is as a “bastard,” but like so many literary rakes and rogues, this is more show than truth. Under the best of its authors—Delano and Ennis and, more recently, Mike Carey—Hellblazer focuses on those moments of heaven we experience here as humans, and these are framed entirely in terms of friendship. In a world where “bastards rule and wankers whine and berks bend over, cheeks spread wide,” friendship takes the place of religion, which is presented as just another authoritarian structure, a con pulled off by those in power to dupe folks who want to believe. Friendship, however, is real—real transcendence, real community. As one of Constantine’s soon-to-be-dead friends says, “When you’re gathered round a table in a pub with good friends an’ good drink an’ good chat . . . Why in the name of God would you want to go to church?” 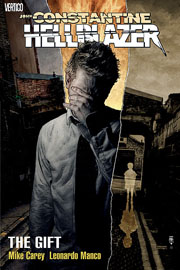 This religious feeling about friendship even manages to resuscitate a forgotten pre-Christian deity, who, in a poignant Christmas story, is found moping about London and quickly cheered up by Constantine over a series of pints. This character, the Lord of the Dance, recurs in the Ennis-penned “Forty,” wherein the only real plot element with any horror to it is the fact that Constantine is getting older; it’s his fortieth birthday, his girlfriend is out of town, and his best mate is on all-night cab duty. But there is a surprise party, hosted by the horned god, featuring an assortment of friends—a rogue succubus, an anti-capitalist activist, a vicar, a famous superhero magician, even a talking rabbit (“Effin’ shite. Effin’ irony, he said. Puts me mind into the effin’ rabbit off me stage act, like. Irony.”) There’s a profound innocence to this story, beneath all the hedonism—yes, Swamp Thing shows up, and is guilted into working some elemental magic with an otherwise forlorn pot plant, and yes, Zatanna, a card-carrying member of the Justice League, gets so stoned she mumbles, as her joint hovers midair, “M’i tuo fo ym ecaf”—but the subtext here involves one man’s very conflicted sense of self, the lingering shadow of mortality, and how even folks who have plenty of reasons to be pissed off at him can render an appreciative assessment. “You’re not perfect,” says the Lord of the Dance, “You usually end up covered in blood with the shit kicked out of you, pissed off at all the bastards with the power that you just can’t touch . . .” Indeed, while quite a few of the guests at this party will end up dead in future issues (even the rabbit), not all dead friends are accusatory. One deceased mate—an Irishman who, at the last minute, Constantine managed to save from the clutches of Hell—comes back for a pub crawl with the magus, telling tales of heaven: “The place is just one bloody great big pub! An’ the Guinness—Oh Jaysis, John! Straight from the Virgin’s tits!”

For Constantine, whose life swings dramatically from saving the world one minute and homeless alcoholism the next, the presence of friends—and the idealized portrait of pub culture as a space designed for the facilitation of temporary but still authentic friendships—is the counterbalance to all the terror, both the obvious terror of serial killers and Hell-spawned beasties and the more subtle but more crushing terror of knowing, under it all, that all the wisecracks in the face of Satan, all the raised middle fingers against the façade of Parliament, is just so much froth. Constantine might save the world from time to time, but he’s unable to touch the systems of oppression and abuse, the powers that be with their authoritarianism and insatiable greed, in any real and lasting way.

When, during one of the many exaggerated rumors of Constantine’s demise, his friend the vicar performs a funeral for him, the service begins with a reading from Proverbs: “There is no wisdom, no insight, no plan that can succeed against the Lord.” Then, chucking the Bible over his shoulder, the vicar says, “Tell that to John Constantine. John followed no creed save his own, and I for one will not condemn him for it. He walked from darkness into light and back again, and made enemies from camps both good and evil on his way. He would not accept the judgments of morality or society, no matter how powerful the structures that supported them.” Here is the conjoined glory and tragedy of this series: there are no illusions that punk rage is anything more than that, and the power will never be toppled. But, in true human fashion, we can all keep trying, keep striving for an impossible ideal, keep flipping the bird at death, Hell, the devil, Maggie Thatcher, et al. And after a certain hour in the evening we can knock off for the day and head down to the corner pub, to meet old friends or make new ones, if only for a length of time between the first pint and last orders.

Books referred to or quoted from in this review:

Original Sins. Jamie Delano and others, 1992. CLICK HERE to purchase.

Dangerous Habits. Garth Ennis and others, 1996. CLICK HERE to purchase.

The Devil You Know. Jamie Delano and others, 2007. CLICK HERE to purchase.

The Roots of Coincidence. Andy Diggle and others, 2009. CLICK HERE to purchase.

India. Peter Milligan and others, 2010. CLICK HERE to purchase.

all published by DC/Vertigo