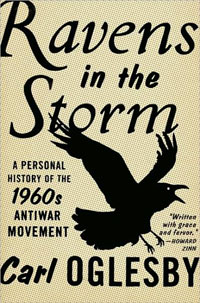 At least since the Civil War, each American generation has forged the narrative of itself on the field of social struggle. After the Abolitionists came the Populists and the Progressives, to be followed by the Old Left of the 1930s and the New Left of the 1960s. Whether it was agrarian reform or trust-busting, the social plight of the Great Depression or the agony of Vietnam, young Americans found in the various crises of our wayward republic a challenge to renew the nation’s promise. Those who love social justice will not necessarily lie in honored graves, but, as Kenneth Rexroth said in his wonderful elegy, “For Eli Jacobsen,”

It is
Good to be brave—nothing is
Better. Food tastes better. Wine
Is more brilliant. Girls are more
Beautiful. The sky is bluer
For the brave—for the brave and
Happy comrades and for the
Lonely brave retreating warriors.

These thoughts came to me in reading Carl Oglesby’s memoir, Ravens in the Storm, because the present American generation is the first that has known no battle and will remember no song. Cycles of American radicalism have come in thirty-year waves so regularly and for so long that they seemed part of the pulse of our democracy, but no longer. The last one was due in the 1990s, but we got instead the Harding-esque era of peace and prosperity the Clintons were recently so eager to dial up again. The Iraq war brought protesters back briefly into the streets, but they vanished with the first shock of combat. These were not the Armies of the Night.

Oglesby grew up in a similarly lobotomized time, the 1950s, and the early ’60s found him employed as a tech editor for defense contractors, first at Goodyear and then at Bendix. But he was also living in liberal Ann Arbor, and trying to establish himself as a playwright. His after-hours friends introduced him to Students for a Democratic Society. Within a few months he found himself deeply immersed in the antiwar movement, and within a year—having resigned his job, alienated his South Carolina family, and taken his own family from split-level to crash pad—he was president of SDS itself.

Oglesby tells this story rather impressionistically, but it is evident that the war awoke a latent social conscience and galvanized his formidable political and organizational skills. His theatrical bent made him a compelling orator as well. A little older than most of his colleagues in the New Left, he was soon its precocious elder statesman. (The New Left did not kid when it said not to trust anyone over thirty; the only old Lefty who played any significant role in its ranks was Dave Dellinger, and he was more activist than leader.)

The war was both the life and death of SDS, and of the larger, inchoate political force to which it gave birth and which had no other name but the Movement. Oglesby himself was critical in the transformation of SDS, a mildly reformist student group at first confined to community organizing, into a self-proclaimed revolutionary vanguard whose goal was nothing less than confronting the military-industrial complex, restructuring American life, and deimperializing American foreign policy. With a bit of poetic license (including lengthy conversations reconstructed from memory), Oglesby recreates the headlong excitement of the moment, in which even the Movement’s ostensible leaders were often largely bystanders as it grew exponentially, outstripping any capacity to organize or direct its protean energies.

The Movement’s fuel was the war, complicated by feminism and by the Black Power activism that had arisen from the civil rights movement. All of this, together with a rich pharmacopeia, blended uncertainly into something called the Counterculture, the communal lifestyle that opposed itself to bourgeois mores as much as to the war. To their often aghast (and occasionally seduced) elders, the children of the ’60s seemed a generation run amok. To those children, however, it was Cold War society itself that had run off the rails, with its militarized economy, its brutal repression of Third World resistance to the capitalist order, and its gaming of nuclear confrontation.

SDS tried to maintain itself as a focal point amid the chaos, but it was torn apart by the same forces that were driving the Movement as a whole toward destruction. Oglesby’s testimony is invaluable, and at times unbearably sad. A born tactician, he understood that building bridges to a wider antiwar community, including business leaders and even oppositional forces with the government, was essential if the Movement was not to marginalize itself and succumb to its own messianic impulses. To his younger colleagues, this was retrograde liberalism, and made Oglesby personally suspect. Hadn’t he worked for defense contractors, and enjoyed a security clearance? Might he not, in fact, be a government plant? In a scene worthy of a Stalinist show trial, Oglesby found himself confronted at the SDS national meeting in Austin in 1969, and essentially purged for his deviations from ‘Marxism-Leninism.’

At that point, SDS, or at least its most radical faction, the Weathermen, was ready to take the tragic plunge into violence. There is a certain point at which paranoia becomes normative thinking, and Oglesby, reflecting on the fact that both the Weathermen and the FBI operation that infiltrated the Movement, Cointelpro, were both products of the year 1968, wonders whether they might have been “in some way connected.” He does not appear to see the irony of this conspiratorial style of thinking, which was precisely what had indicted him in Austin. Thus did the Revolution devour its young.

Oglesby seems to be a fundamentally irenic man, and he is charitable even in personal disagreement. But his judgment of SDS’ fatal turn is untempered by the years: “They produced a theater of the absurd and called it the revolution.” There is harsh truth in this, but it begs a larger strategic—and moral—question. Oglesby concedes that SDS had written off mass demonstrations as a viable antiwar tactic even before the March on the Pentagon in October 1967, and that it had come to an impasse in its efforts to confront the war. The Tet Offensive, Lyndon Johnson’s subsequent withdrawal of his presidential candidacy, and the campaign of Robert Kennedy seemed to offer some hope of movement through conventional politics, and this is the course Oglesby favored. But Kennedy’s assassination dashed these hopes, and left the Movement without a plausible alternative to violence or quietism. Either way lay defeat, a defeat so severe that it produced a forty-year conservative backlash, and a lost generation on the left.

Recently I saw on my campus a group of students behind a small sign that read ‘SDS’. Could these be the first of the new ravens? For surely we are in a storm.