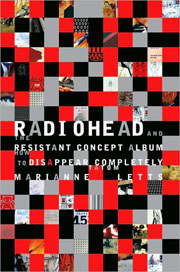 On Feb 18, 2011, Radiohead launched their newest album, The King Of Limbs, on their website. The digital download cost $9, though fans could also pre-order (for $50) what the band described as the world’s first “newspaper” album: a deluxe audio-visual package consisting of 2 vinyl records, a CD, a digital download and hundreds of pieces of artwork. The launch followed Radiohead’s much-hyped 2007 release of In Rainbows, where the band let users pay what they wanted for a download of the album.

Talented musicians and master anti-marketers, Radiohead have spent their careers pushing the boundaries of musical creativity and mass production. Marianne Tatom Letts’s excellent new book returns to the origins of the band’s subversive marketing strategies: the making and selling of two of Radiohead’s most interesting, dense and disputed albums, Kid A and Amnesiac. Letts’s smart, in-depth account reveals as much about Radiohead’s ambivalent and conflicted relationship with popular culture and contemporary capitalism as it does about their musical appeal.

Some might argue Letts’s biggest contribution is her theorization of what, conceptually speaking, makes a concept album. Her introduction discusses academic and journalistic work on the topic (with nods to undisputed concept albums like Tommy and The Wall) in order to position the concept album within art rock and progressive rock traditions. Letts presents a concept album taxonomy that will be highly useful for popular music scholars. While some song cycles hold together based on a linear narrative with a plot or characters, others cohere thematically and rely on repeating musical or lyrical motifs. Letts assigns Kid A and Amnesiac to a category called the Resistant Concept Album: one that is “unified but resists interpretation,” on account of its non-explicit plot, musical discontinuity, and unclear lyrics/concept. Kid A and Amnesiac aren’t the first resistant concept albums, but they are illustrative of a tradition that simultaneously subverts and fulfills the expectations of the recorded music commodity.

After a well-researched survey of Radiohead’s career before Kid A, Letts proceeds with song-by-song readings of the musical, lyrical, and paratextual elements (i.e. packaging, websites, and other marketing materials) of the albums under consideration. She claims it is “helpful but not absolutely necessary” to know how to read music, but music scholars will surely take more away than general audiences in other fields (i.e. media studies, cultural studies, etc.). Still, Letts makes a sincere effort to keep her interpretations accessible for non-experts and to link her readings back to the wider themes her book explores.

Kid A and Amnesiac are resistant concept albums because they feature loosely unified mediations on the death of the subject in modern life. Letts convincingly traces how the first four songs of Kid A follow a subject whose only means of coping with the alienation brought by modern technology, politics, and capitalism is to disappear completely. She then argues the second half of Kid A and most of Amnesiac can be read as persistent but futile attempts to reconstruct the subject. Letts skillfully addresses lyrics, groove, notation, and other song elements where appropriate. She also uses inventive techniques like grouping lyrical snippets from across songs to form an “image trail,” a method that seems particularly suited for analyzing a fragment-spewing poet like Thom Yorke.

Despite her attention to the music, Letts never forgets it is not just sound that conditions our reception of albums, but also the way albums come to us. Kid A was marketed atypically without true radio singles or proper music videos, whereas Amnesiac had a more traditional launch. Despite the fact the band and its label (and subsequently, the press) trumpeted Amnesiac as a return to the “classic” Radiohead sound, Letts pours water on the idea that it is somehow easier to digest. Although some readers might quibble with her insistence on following the status of the modern subject across both albums, Letts likely never intended her reading as the only one. For Letts, it is clear that a “concept album is in the eye/ear of the beholder”—a statement that in some ways trumps her conceptual taxonomy but remains entirely inarguable.

Letts’s bigger achievement here is her nuanced approach to Radiohead as commodity, as cog in a larger system the band both reviles and requires. Radiohead embody the irony of trying to make an “artistic statement that exists above . . . the corporate culture that will ultimately receive and promote it, then packaging that statement to sell back to the consumer.” Radiohead hide from this contradiction within layers of fragmented lyrics, abstract artwork, and labyrinthine websites (I remember the Kid A website reading “www.radiohead.com—as useful as a chocolate fireguard™”). The band has spent years reconciling its public image with its ethical and political commitments by masking both. Radiohead may present a scathing critique of commodity culture but they are reflexive enough to know the role they play in their own commodification.

In this sense, the resistant concept album becomes a metonym for Radiohead’s entire career. By resisting the form of the concept album while still adhering to it, Kid A and Amnesiac show “there is no escape within the modern human condition, just as there is no escape for Radiohead itself trapped inside the capitalist machine.” Letts, via her readings, sees only one way out: “In the end, music as a commodity must become self-critical, must confess its commodity character without surrendering its utopian content: that the world could be otherwise.”

This is what was so exciting about In Rainbows. By asking users to set their own price, Radiohead suggested that the world of mass music production could be otherwise. Many in the industry worried the band was devaluing music, giving it away for free. Instead, the possibility of free forced a questioning of the relationships between listeners and the music commodity, which was ultimately freeing. Sadly, Radiohead’s experiment also made the perfect rock music marketing campaign. Skeptically, In Rainbowsshowed how far the music commodity could be pushed (i.e. selling it once as a download, once as a CD, once as vinyl and once again as individual songs and tracks). Like the vanishing subject Letts tracks onKid A and Amnesiac, the utopian potential Radiohead sparked disappears completely, lying dormant and waiting until the band’s next album launch. Or as Radiohead sings, and Letts quotes: “I will see you, in the next life . . .”