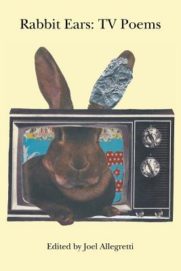 Rabbit Ears: TV Poems represents the first poetry anthology about TV, ever. All 129 poems in the anthology, written by an impressive diversity of poetic voices, address the medium of television from every angle. There are, for example, poems about a first encounter with a television set: a father dragging home a furniture-sized mahogany console and installing it in the living room. (Do you remember your first TV?) Another poem recalls watching the reports of John F. Kennedy’s assassination. And if you recall a TV show from your childhood, there is likely a poem written about it in this collection.

The poets here, in other words, address how TV has affected them, their relationships, and even the society we live in. Ellen Bass recounts the formative experience of watching the Miss America Pageant as a little girl. In “How I Became Miss America,” she writes:

Rabbit Ears, named after the iconic TV antennae, deploys a multitude of poetic forms ranging from free verse, prose poems, sestinas and sonnets, haiku and senryu, and even poems structured like interviews and screenplays. With its diversity of content and poetic form, Rabbit Ears feels more rich and eclectic than any other poetry anthology on the market.

Admittedly, this claim is bold. After all, there are countless anthologies of poetry that address a vast array of subject matter and material. A quick survey in the Poet’s Corner of my local bookshop, for example, reveals a shelf full of anthologies whose themes range from love poems, war poems, the best poems of the English language, the best poems of a given year, French Symbolists, Asian American poets, seven Texan women, joke poems . . . the list goes on. In short, poetry anthologies are legion. So why is Rabbit Ears the first poetry anthology about TV, ever?

Perhaps it’s because poetry suffers from a burden of nobility. Make no mistake about it, poetry does address the higher pursuits of humanity: our desires, our foibles, the meaning of life, the inevitability of death. Does the utter quotidian banality of watching television, then, stand in direct opposition to poetry’s apparent higher calling? Certainly, there are poems in Rabbit Ears that address the morbidity of television watching—the little deaths we succumb to while tuning in, day in and day out, over our entire lives. Tantra-zawadi, for example, in her poem “Radiator Grooves,” recalls:

Watching Daddy drive up
In his sky blue Belvedere
Lifting a shiny, color television set high in the air
Wonders of Tinkerbell, Mr. Greenjeans, and Captain Kangaroo
The box
Oftentimes entertaining
Mainly gave me the blues.

Of course, demonizing television has always been part of the strange logic of the medium. Since television’s inception, actually, people seemed not to trust it. As Toby Miller recounts in his 2010 book Television Studies: The Basics: “The Director-General of the BBC at the time the new medium was becoming popular . . . refused to have a set in his own home, and instructed TV executives to ensure viewers did not watch it much.” Nothing brings out primal fear like new technology. And yet there is simply no denying that the lion’s share of 20th-century American culture has been expressed and transmitted through the medium of TV.

Indeed, we have imbibed television like a fish takes in water for breath. In his 1993 essay “E Unibus Pluram: Television and U.S. Fiction,” David Foster Wallace explains the pervasive effect television has had on American culture at large: “The US generation born after 1950 is the first for whom television was something to be lived with instead of just looked at,” Wallace writes. “For younger writers, TV’s as much a part of reality as Toyotas and gridlock. We literally cannot imagine life without it.” In other words, television is what binds us together, what we have in common. Dana Gioia’s blurb on the back of Rabbit Ears explains the significance of television in our epoch: “What Nature was to the Romantics, the TV screen has become to contemporary Americans—the everyday sensory world that shapes the imagination.” Rabbit Ears represents, then, one of the oldest mediums of art and communication (poetry) engaging with one of the newest.

One of the misconceptions people have about new communication technologies is that they render past communication technologies extinct. Radio killed theater. Television killed radio. The Internet is killing television. E-books are killing the printed page. It’s a classic narrative, but is it really accurate to say TV snuffed out past communication mediums and technologies? In his aforementioned study, Miller argues rather that “TV blended all of them, becoming a warehouse of contemporary culture that converged what had gone before.” Moreover, despite what could be called the television singularity, past communication technologies rarely died out; instead, they shrank to fit particular niches, or even outlived their original functions as their utility evolved. (No one saw the pager and payphone, for example, becoming integral tools in the illegal drug market.) Some think poetry has followed this trajectory—that it has receded permanently into fringe culture, read only by pasty academics, smug dandies, or hipsters looking for an edge. Rabbit Ears suggests the contrary, however—that poetry has reemerged onto the public square, uncompromised by newer communication paradigms.

If television is a warehouse of culture, what happens when we repackage that culture in sonnets? Or when we reinterpret Buffy the Vampire Slayer in the twelfth-century French poetic form of the sestina? Jason Schneiderman’s “The Buffy Sestina” does just that:

Buffy is upstairs sharpening her large collection of stakes
when her mother comes upstairs and says, “Would it be bad,
just this once, not to go out staking vampires again tonight?”
After all—she had just defeated an apocalyptic force! Time
for a break? Buffy never has time for a break. Angle gone,
her stakes sharp, she kisses her mom and hops out the window

Every stanza in a sestina rounds off with the same six end-words, rearranged according to an intricate pattern; as the poem progresses, the end-words build up like surf and clatter against each other in a rich game of wordplay and hyper-nuanced meaning. Critically, the end-words also build a platform for a central theme and a circular narrative to which each stanza consistently returns. In Schneiderman’s sestina, the end-words—“tonight,” “time,” and “window” for example—and those words’ cyclical repetitions seem to echo how the standard TV show also relies on repetition of storyline, plot, and characters from episode to episode. In fact, one could say that the structure of an episodically-formatted TV show platform has its very roots in such poetic form. When a sestina repackages a TV show, then, we see how what is said and how one says it become almost indistinguishable. In “The Buffy Sestina,” the medium becomes the message, and the reader comes away from the poem with a richer understanding of both the sestina as a form and how TV draws more from older artistic mediums than we realize.

And yet, while still lingering in the Poet’s Corner of my local bookstore, I cannot shake the feeling that the vocation of poetry is somehow not up to the formidable task of addressing our culture of television, and as a result the nobility of poetry has been drawn into some kind of uneasy détente with the poems in Rabbit Ears. Compare Dylan Thomas’s “Do not go gentle into that good night,” for example, with Aaron Anstett’s poem in the collection, “Self-Portrait as Jackass on Dash Cam.” But then we might recall that in one of his letters, Rilke writes: “Don’t write love poems; avoid those forms that are too facile and ordinary . . . Rescue yourself from these general themes and write about what your everyday life offers you.” Here Rilke unshackles poetry from its gilded throne and claims that poetry can address the more quotidian circumstances of living. In Rabbit Ears poetry engages with these ordinary circumstances, the daily grit, where a considerable portion of our lives is devoted to the watching of television. In his poem “Television,” Bill Zavatsky writes:

There must be something
I want from this television
that leads me to watch it
for hours on end, hovering
at the rim of its well
where the swirl of colored images
almost slakes my thirst
by expanding into a body
of water stirred by an angel
so immense its coast-to-coast
transmission could stop time.
And so it does.

In this sense, Rabbit Ears strikes at the heart of something deeper in our culture than just the current predicament of poetry; the poems here grapple with the unglamorous underbelly of day-to-day living that we all experience, but the poems also are representative of how contemporary culture deals with memory and forgetting. After all, we are a peculiar species of animal that constructs cultural artifacts so as to counteract the natural flow toward forgetfulness and oblivion. Today, however, it seems that we refuse to forget anything—our cultural past is almost uncannily accessible. The culture we experience is not dictated by syndication, relevancy, or even fame. Instead, what we have the luxury of choosing to experience depends upon the desire to dredge it up from collective memory, where it has been outsourced in vast digital warehouses. Recalling his 1950s childhood in America, novelist William Gibson writes in an essay that “the dead were less of a constant presence, then. Because there was once no Rewind button . . . Because there were old men in the mountain valleys of my Virginia childhood who remembered a time before recorded music.” Today, we are left instead with what seems to be an ever-present Now. Our cultural past crowds the margins of collective memory and merely waits to be rummaged through according to even the most desultory whim. We seem not to be able to forget even if we wanted to.

Does the inability to forget explain, for example, Internet memes that replicate themselves ad infinitum? Does our ever-present Now spell out the existence of TV shows like “30 Rock,” which are effectively TV shows about TV shows? If we can access the cultural past so easily, in other words, does that explain the current impulse to produce so much culture about our own culture, poetry about TV? Perhaps Rabbit Ears represents, finally, poetry’s engagement with this ever-present Now. In the anthology’s pitch-perfect Addendum, “There’s Nothing on TV,” Roy Lucianna writes:

I sit vacantly,
In front of the screen.
It’s been hours
And I’ve seen many things
Of interest.
Much music heard,
Words spoken,
Scintillating.
Continuous.

Knowledge, even.
Entertainment,
Reinforcement
For neuroses.
TV lacks nothing.

There’s nothing on TV.

Maybe I should turn it on now,
Just to be sure.

Lucianna describes the rapture of Miller’s television singularity, where all art forms merge. Our culture, literally unforgettable, describes a kind of end point for Lucianna: “TV lacks nothing.” Yet at the same time Lucianna questions this singularity: “There’s nothing on TV.” If TV possesses everything—“Much music heard, / Words spoken . . . Knowledge, even”—what is it about TV that nevertheless leaves us wanting, unsure? Another way of putting the question is: why am I still stooped over this footstool in the Poet’s Corner reading poems about TV, when I could be watching TV?

When the flow of forgetting was relatively unimpeded, a long time ago, we remembered in tiny little capsules of meter, rhyme, and memorable turns of phrase. In other words, we etched language into melody in order not to forget. Before we began storing ourselves in radio, television, and the Internet, we stored ourselves in song.

Despite everything, Rabbit Ears shows us that we still do.