There: In the Light and the Darkness of the Self and of the Other
Etel Adnan
Post Apollo Press ($13)

from the warring factions
Ammiel Alcalay
Beyond Baroque Books ($12) 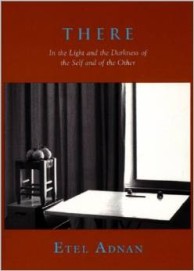 October 2002, America. Standard Time began this week; as ever it marks the random nature of time. Early nights. Emptying trees. Tragic news from around the world. Questions around dinner tables. Children hunched over homework.

What are we going to do? Our sense of things is absolutely lonely. A planet in space, no up, no down. A little lighted dot in a bag of darkness. "A heuristics of fear," is what Hans Jonas called it. "Lucky it wasn't me" is a person's daily thought after reading the papers.

In a matter of weeks everyone will have forgotten all of the events of this month, and on back into the year before. But I am not sure that memory is the way to salvage belief because it, too, has the status of fiction now. Culture is kitsch—a few spicy dishes and a color code for dress-ware, Christmas cards from a grandmother who lives in another country.

Etel Adnan grew up as the child of a Syrian Muslim and a Greek Christian between Beirut and Damascus, and endured the Lebanese Civil War before emigrating to the United States. Her book, There, is an act of confrontation with the above unhappy view of our world now and its origins and results. That is, it examines the repetition of the same eruptions and emotions and questions. What is the effect of knowing on what I do? Why am I named what I am? Where is there when I am always here?

Her landscape, dry but surprising, could be somewhere in Southern California. Militarism haunts it, and creates an anxiety that is all shadow. But shadows are not the same as obstacles. And many dreads are malformed shadows of the actual, not the actual itself. This is the real problem that Adnan wants to solve in her writing—which shadow is formed by the real, and what is the real?

Adnan is also a serious painter, and some of the difficulties of art enter into her narrative. Is there any way to make form and substance the same without dividing them? Where is color, if not both behind and before the color beside it? How would you get from white to color and back to white again on one canvas without making them all the same? Only by relationship.

Absurdly absurd this absurdity. Shadows, old companions, speak their own immensity. Why should I desire to undo Nature's simplest law—how can I remove your shadow from your body, and what good would that do to the nations I care for?

Adnan asks questions that she (thankfully) doesn't dare to answer. They are about the female and the male, the you and the she and the I and the he, being divided although made of identical substances. In the Psalms there is a similar vacillation between subjects (I-he-you) that puts this book, including its drawn desert face, into the ancient realm of the absolutely uncertain.

For Adnan the mercurial nature of the pronoun does not prove that a person is an invention of culture and perspective, but instead shows that we each contain the evil and good deeds of all our ancestors—that they are us. You are a hater and a lover, a warrior and a woman. It is not a matter of relativity but of non-dualism. The enemy is embedded in the face of every approaching friend.

I hated you for so long in the inner territory that we inhabited together that you're now the negative print of my identity (no, not a shadow), the unwanted companion who becomes, o tragedy!, love's very substance. 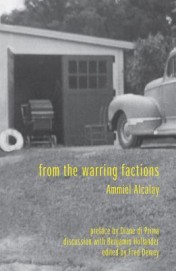 archaeology. This approach could be called post-modern. Formally it proceeds from recent American poetics and seems free from neo-gnostic self-examination and doubt.

Alcalay grew up in Boston and now lives in New York. He is a poet, translator, critic, scholar, teacher, and journalist; his specialties are the Middle East, Eastern Europe, and Levantine culture generally. He spent many years out of the country in ex-Yugoslavia and Jerusalem and has maintained intense friendships across the years and borders.

This book is an excellent example of the thinking that is emerging from a post-Cold War generation. It could be used as a manual for trying to understand the way popular, ancient, and literary languages are "sampled" by writers who desire a new transnational consciousness.

The first part of the book is broken into five sections, each one being a kind of homage to a forensic anthropologist named William Haglund, who investigated and trained others to investigate the corpses of people killed in massacres from Rwanda to Argentina. Alcalay imagines Haglund tracing evidence of what happened in the dust and on car wheels, saying he "could have been Virgil mapping out his descent through the circles of hell."

This investigative activity is what Alcalay is himself doing, by resuscitating anonymous voices and writings from a variety of cultural eruptions. The writings are not ironic or lyrical:

But lyrical moments come in very short, spoken clips: "Or the frontier then, along with some angels falling."

The second part of the book is a long and rewarding interview with Benjamin Hollander. Despite Alcalay's realism, it is strangely optimistic. From his breadth of curiosity and generous sharing of what he knows, a kind of hope in the human ability to transcend history emerges. He combines anecdotes with opinions, observations with results.

As an American in Israeli society with a Sephardic consciousness and an awareness of the Palestinian perspective, I found myself in a unique position. I could pass for white and was privy to all kinds of racist behavior that people couldn't imagine I would object to. This experience was formative for me, and it re-inscribed things that I was certainly aware of growing up in the United States but which were only driven home for me by being in Israel/Palestine. And it was through the Mizrahi and Palestinian activists and artists that I befriended—through the work they produced and the movements they created—that I began to grasp the true sequence of cultural permission and transmission in the formation of knowledge as a collective endeavor, rather than the way we are usually taught such things proceed—through acts of singular perseverance or genius.

In the final part of the book, Alcalay (a proponent of communalism and full disclosure) tells us which writers he drew his sentences from, and explains the politics behind this method. One of the most articulate and fully developed accounts of literary sampling, it illuminates the first part of the book the way notes by Robert Smithson would unveil the spiral jetty or other of his earthworks.

From the warring factions is a book without questions, and substantively unlike Adnan's There for this very reason. It is a book that answers itself, and in this way it is a useful and complete book for our time—a kind of textbook which concludes with the statement: "By making words and languages reorient themselves across time and face each other under new conditions, my intention is to re-awaken the ancient force of poetry-as fact and testimony."

From the primeval waters we arose—you and I, from the beginning we went on a search and when the gardens grew we looked together for a shade, didn't we?

From the desire to live we arose and built nations, didn't we?

. . . then the trees stared at their own bareness and we didn't come to their aid, did we?