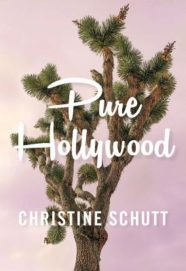 Author of three novels and two short story collections, Christine Schutt, with the exacting grace of a water-skier, takes us prickly places we don’t want to go in her latest story collection. What is this place saying? she asks insistently through numerous characters and their highly individual circumstances. Schutt’s universe is a thin, brittle one, where even the young are old.

In the opening novella, “Pure Hollywood,” Schutt writes, “Since they had moved to the desert Mother thought most about what happened before with people they didn’t remember or hadn’t known.” We are dropped into worlds like this often, voids, a moment choked by another moment of loss. The details of characters’ predicaments are explosions within the strict confines of time before they float away, becoming more feeling than fact:

Let’s say it was May in the first decade of the hardly promising twenty-first century, and a white stucco wall, corsaged in bougainvillea and lit up by the moon, enticed them downhill a long way past gated properties to a wider road, then down that road and across it on the other side to the lookout onto the sparkle that was the city and what lay before them at the liftoff of another beginning, which feeling they would experience again, until decades shrank to pieces of colored stone, mosaics unexpected and unfitted yet shellacked together and made to glow alike in recollection so that all she had known of love and the end of love could be summoned and summed up in a ceiling pinked in sulfurous light.

Schutt’s remaining ten stories vary greatly in length, but they share an atmosphere, always carrying the sensation of the West, where fine, gritty sand is sprinkled everywhere, never fairy dust: “the just-right night of Los Angeles” Their plots often pebble like water over skin and dissipate. And the pace is a sprint, always toward the horizon. The story “Family Man,” for example, delves in and out of conversation with itself: “He hears his name, but has no desire to know how he might be described in the future: a glass of water, a flavorless man, at best, at best, on a white tablecloth a goblet of melted ice with the slightest curl of lemon in it. Through the blinds a blade of sunlight cuts the glass in half and shows up dust.”

While Schutt sucks the romance right out of any situation, and even in her flash fiction holds us somewhere longer than is comfortable, she makes us wonder if there is exactly where we should be. Unnerved while taking pleasure in her language, lost among her characters in the never-ending desert, we wince from pain and sometimes from beauty also.