In The Notebooks of Malte Laurids Brigge, Rilke has a bit about how, if you gather experiences throughout a long, rich life, you might be able to eke out maybe ten decent lines of poetry at the end of it. He’s talking about how meaningful utterance announces itself spontaneously from what we live through, though there is also something here of the Modernist word fetish, the same kind of bravado that Oscar Wilde expressed when he claimed to have spent all morning removing a comma and all afternoon putting it back. What it also suggests, and what is easily overlooked in our eagerness to be as badass as our masters imagined themselves to be, is that the line, the phrase, or even the lowly comma might serve just as well as the poem as the basic parcel of lyric expression, its most readily identifiable real estate. When teaching poetry so often means spending an hour discussing a line, why not treat that line as self-sufficient? Why not make it the subject of an article or give it its own page in an anthology? What if the references in a book’s table of contents are merely suggestions, or a rough map of the whole, rather than an itemized list of individual works?

Lightsey Darst’s Dance and John Colburn’s Psychedelic Norway both reflect this rethinking of what constitutes the lyric, and they do so in bold, often exhilarating ways. In trying to grasp these poems’ movement from start to finish, we cannot lean on prosody, as we could with traditional English forms, nor on narrative, as we might with postwar Confessionalism. Neither form nor story makes a convincing case for where these poems should begin or end, though they remain insistently invested in both. Instead, these books, for all their clear attention to design, consist of parts coalescing into wholes, like the exquisite notes of Nicolas Chamfort or Joseph Joubert, or the micro-journalism of Félix Fénéon, published as Novels in Three Lines. (An aspirational title, since many of them are only two lines long in the American printing.) Given that literary journals are by their very nature organized around the principle that individual pieces are self-contained, one has to admire the perspicacity of those editors who accommodated this work as it was being developed, or who might otherwise have tricked themselves into reading these pages as autonomous.

That’s an easier sell in the back half of each book. But even in standalone poems like Colburn’s “what we knew and what we decided and what we built (guerilla warfare)” we encounter lines spoken with such authority and control that any one of them could lend the book its title. It just happens that the last of these did:

Someone lit the firecracker in the trendsetters’ mope warehouse.
We decided to set a travesty.
Then for a while the motorbike was everything.
Our travesty was sin and it could travesty anything.
We built a small fire-eater-in-waiting,
we built a gigolo gland.
We heard singing from the fjords of psychedelic Norway.

It’s not that the lines don’t fit together, or that they don’t accumulate value. Clearly, they do. The “set” of “set a travesty” assumes the weight of the firecracker in the preceding line—itself an echo of “firebomb” and “firecracker-in-waiting” earlier in the poem, soon to be “fire-eater-in-waiting”—just as that travesty, now set, sets up the antanaclasis of “travesty” one line later. The composition is sinewy, both in the thickness of its internal resonances and in the force it commands. But it is also modular, with the strong pauses between lines suggesting a finality to each. 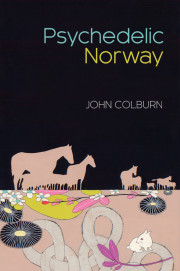 While he sometimes breaks away from them, Colburn is most at ease in these direct declarative sentences, coterminous with the line, their tone sloping downward so smoothly from start to finish as to render the fact of the matter simply, matter-of-fact. Without the line breaks, the same effect features strongly in his previous book Invisible Daughter (Queen’s Ferry Press, 2013); poised in that Phantom Zone between prose poem and flash fiction, Invisible Daughter is loaded with delightful nuggets of faux-wisdom that, on further reflection, turn out to be not-so-faux: “Historians would ring the bells but in the woods history meant nothing.” “A door slows you down.” “Speech had gotten stuck in our big steak dinner.” In form, the pages of Psychedelic Norway tip decisively toward the lyric poem, but the acutely-observed, aphoristic pronouncements—“may the red birds sing for anyone trapped,” “all of this meat is how I am”—are equally prominent as the site where the poems happen.

Does this mean that the poet—and why not the reader?—might rearrange these sentences without damaging the integrity of the whole? Yes and no. Colburn’s work is deeply invested in story; “pre-occupation,” the accomplished, thirty-one-part sequence that is the heart of Psychedelic Norway, is as close generically to a minor epic as anything being done in English today. Yet here, too, we find statements that fit together beautifully without completely foreclosing the possibility that they might be refitted some other way:

Some animals are given the names of their cries.
Birds may have fatal habits.
Any leopard vibrates at a frequency a good deer can hear.
When it is time to mate, the cockroach speaks in the voice of Old Glory.
Little is known.
In fluency of embrace the alligator has advantages.
During mating season, the emperor spider withholds its vocabulary of string.
Baboons spit pulp as a form of gratitude.

As with most any narrative, plot proves more flexible than story, which maintains its contours even as the components of its telling may be re-sequenced. Such surgery typically alters our experience of the story—the art of poetry is predicated on the assumption that structure conveys meaning independently of representation—though the story remains the same. Colburn’s work garners much of its energy from the sense that it is what it is by some fortuitous, tenuous miracle. It seems constantly on the verge of taking its considerable gifts away, but then it doesn’t. 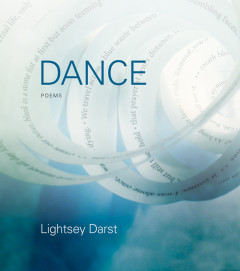 Darst’s Dance operates on much the same principle, with the notable exception that whereas Colburn tells stories, Darst performs. Written almost entirely in long-breathed, disjointedly-punctuated couplets, these pages bleed one into the next, the headers in the book’s first and third sections providing performance notes that are by turns cryptic, whimsical, and occasionally instructive: “[Listening, chanting. Let a crown / rise from your head.]” “[Leaving air open for water or fire.]” “[Lie down in the open space: let fragments / be heaped around you.].” This last one could serve as instructions to the private reader as well as to the public performer, which makes sense, insofar as a poem’s reader is, in silence or otherwise, necessarily the medium of its performance. True to the book’s title, the more urgently Darst heaps her fragments around us, the more we feel swept up in a remarkably kinetic, visceral movement.

A few years ago Katie Peterson wrote that in contemporary poetry the couplet had become the default stanza of deep thinking; it is curious how poorly this otherwise sharp observation applies here. Not that Darst writes free from intellect, or that her lines are any less intelligent, authoritative, or pithy than Colburn’s: “I’m the one who’s always right: the Author. Now I’ll burn you; you’ll feel little bites;” “if he can touch / down in seven states causing millions in damage he can sure touch you.” But a natural consequence of the poems’ dynamism is that such assertions, whether they pertain to the Self (as in the first of the above-quoted lines) or the often erotic Other (as in the second), come to us as precipitates of a lyric process that evades them until they become inevitable. In this way, the most ordinary, direct language in the book consistently arrives at just the moment when it will strike us as revelatory. It is much as John Ashbery described, now nearly four decades ago, as a poem’s performing the failure to avoid ideas: “But we / Go back to them as to a wife, leaving / The mistress we desire?” Darst makes arriving at ideas feel like a homecoming.

What she does in the meantime is to float us in the aesthetic—more or less literally, in the sensual experience of surfaces. This is especially true in the book’s first section, and there especially in the sequence “The Ash Palaces,” whose attention to the finer details of costumery blurs the distinction between theater and still-life, constructing a hypnotic tableau vivant on the page:

love in a rose thicket. Once all was clean, now “darling, I hide nothing” creeps through our
city like dye
in a vein” “don’t breathe on me” collar of emerald on a jade-eyed captive corrupts, once “I was
worth more

than an alley of museums

Here there is, as the would-be title of one of these poems suggests, “No shortage of symbols.” In their speed and length, however, Darst’s lines are so physically demanding—on the lungs, certainly, but even on the eye—that they usually forestall the kind of contemplative pause, that momentary respite, that symbolic representation typically demands. Then, with a timing whose accuracy befits a dancer and dance critic—Darst is both—she provides that respite, and the surfaces reveal their inner layers: “It parts, waters of the Red Sea close after, what after there is none. empty. Curtains / end this fine chain of impressions your mind could indeed be represented on paper or in // a nightclub fire. We dig old graves but even the best embalming only ends in corpses.”

Coffee House Press, which has given us both of these excellent books (as well as Darst’s earlier Find the Girl (2010), which shares delightful, if likely coincidental, thematic ground with Colburn’s Invisible Daughter), has in recent years demonstrated a substantial editorial commitment to poetry books composed as books—line by line, gesture by gesture, with each part echoing the unity of the whole and the whole thereby guaranteeing the self-sufficiency of the parts. As a model for the book, this is a significant departure from the miscellany of poems arranged, however artfully, from a poet’s work over a given period. While the miscellany has been the dominant model for making poetry books in the Anglo-American tradition (and is likely to remain so), the alternative represented by poets like Colburn and Darst rewards our attention. Done this well, the experience is utterly satisfying.

Click here to purchase Dance at your local independent bookstore