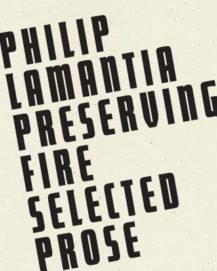 “Not to have this fact seem too important, in relation to my poetry, I state nevertheless that I am fifteen years old.” So begins Preserving Fire: Selected Prose by poet Philip Lamantia (1927-2005). With entries dated from 1943 to 2001—the span of his entire writing life—it is a gathering of material as eclectic and slim as it is essential. In addition to Lamantia’s work, editor Garrett Caples lays out an extensive introductory overview and collector extraordinaire Steven Fama provides a fascinating bibliography documenting the provenance of each piece, several of which are previously unpublished.

Many poets suffer from lack of recognition; in the case of native-born San Franciscan Lamantia it arguably speaks to a rather arbitrary antipathy: Surrealism is broadly panned as a literary sub-genre, especially in the MFA classroom, and Lamantia’s work is decidedly Surrealist. As Caples ventures, Lamantia “was a major American poet, if not the preeminent American surrealist of the twentieth century.” At sixteen his poetry appeared in both VVV and View, the two key New York, based Surrealist publications of the day. This led Lamantia to drop out of high school in San Francisco and head to New York, where he worked in the View editorial office and became the only American-born poet to receive official sanction from Surrealism’s head honcho Andre Breton.

Responding positively to poems submitted to VVV, Breton requested that Lamantia “state [his] position on various matters of importance, mainly on Surrealism.” In responding to Breton, Lamantia holds nothing back voicing a fully formed Surrealist mini-manifesto celebrating a Rimbaud-inflected refusal of conforming to society’s whimsical orders:

To rebel! That is the immediate objective of poets! We cannot wait and will not be held back by those individuals, who are the prisoners of the bourgeoisie, and who have not the courage to go on fighting in the name of the “idea!” The “poetic marvelous” and the “unconscious” are the true inspirers of rebels and poets!

“To rebel!” may seem a stereotypical stance of many an American teenager, yet this is anything but run-of-the-mill teenage angst for a fifteen-year-old in 1943. For all the riotous energy of its content, Lamantia’s communiqué is also assertive, precise, and methodical. In an enthusiastic show of support Breton published the letter in full along with poems, and “a photograph of Lamantia, in the style of a yearbook portrait, appears at the top right of the page on which his statement/letter is printed.” The photograph will be recognized by readers of Lamantia as it appears on the cover of Touch of the Marvelous (Oyez, 1966); it is reproduced here with several others, and these images along with the wide-ranging contents make for, as Caples promises, “a thumbnail intellectual biography.”

Lamantia’s belief in poetry’s alchemical powers to transform the individual through resistance to the most deadening effects of society shines through Preserving Fire. This is a matter of passion and emotion over study and bookish pursuit: “It is not through the intellect that an individual becomes free, but through a spiritual understanding of the purpose of life, which arises from a physical, non-intellectual communion with the world.” Nonetheless, it is difficult not to come away struck by Lamantia’s erudition, perhaps nowhere on fuller display than in “Radio Voices: A Child’s Bed of Sirens,” his testament to the poetic induction radio adventure serials of his childhood offered. Here Lamantia discusses how “rich thematic matter was ritually repeated and latent messages were received and often recreations of exceedingly subversive and mytho-poeic information were heard as if for the first time.”

Another possible count against larger recognition of Lamantia has been his association with the Beat Generation. At times he lived the quintessential “Beat life” replete with drugs, jazz, and international travel—exemplified in “RevelatNewsPort,” a piece spun from his stay in a Moroccan jail:

Passing time in joint two middle class/type spades & I chat ecstatically about Black Muslims pro & con . . . . . and . . . . . is Cecil Taylor our greatest jazzman or not? & how Jazz Music can someday get to CONSTANT SWING LEVELS not unlike—in their way—Indian Raga Music is on ReCrod doing NOW! i.e. after 5,000 yr traditional evolution Feeling & Teckne having achieved point of universal musical superiority Paul Bowles & I recently agreed “Raga Music definitely Greatest music in existence” I say: mebe 300 years from now by consciously-controlled non/commercial Evolution & Dremevolutions Jazz MIGHT COULD make it to SUPER/PERFECT CELESTIAL LEVELS OF CONSTANT SWING . . . .

Lamantia’s “Beatness” represents what is in actuality a minor affair in the broader context of his life’s work. After all, though he participated in the infamous Six Gallery reading where Ginsberg debuted “Howl,” Lamantia presented poems of his recently deceased young friend John Hoffman rather than his own work. Where the Beats were consistently courting fame (even if rather despising of it at heart), Lamantia soared instead towards an inward exploration of the imagination with a religious fervor and not a thought of popular recognition.

A tactful downplaying of one’s own importance to poetry is perhaps Lamantia’s essential teaching. You, the poet, are but an ephemeral momentary instance of language use in the history of the art. Don’t overestimate your importance. Reach beyond it.
“What is proposed ultimately and permanently: the Promethean gesture, the gesture that supersedes the cultural commodity, “the author,” “the artist,” “the poet,” and dialectically subsumes these vain and masochistic inventions of our elders, the obnoxious enemies of desire and human freedom, who are parasitically ranged around and within us.”

There are larger stories worth unfolding here as well: the competing influences upon Lamantia between the Surrealists and Kenneth Rexroth, accompanied by his likewise ducking in and out from under the spell of Catholicism (he ended up, finally, with his own unique mixture as a sort of Surrealist Catholic). Lamantia also offers a systematic critique of Ezra Pound and the poets of Black Mountain College (Olson and Creeley), and considers his place among North Beach poets, the “post-Beat babies” who are still there writing, continuing on. Finally, there is at times his expressing the simple love of beauty, as in his piece on Clark Ashton Smith: “Smith gives us a timeless land, a feeling for the form of the earth, the Pacific, the oak-covered knolls of the Coast Range, the fog-shrouded tip of the San Francisco peninsula, the huge skies and sunsets, the Sierra Nevada’s rustling foothills.”

In the end, Lamantia’s is a voice of rebellious freedom. He always returns to what remains central, the unknowable fullness which inspires his work: “mystery illuminates the marvelous in all things and surreality inhabits the marvelous mystery at the core of all and any reality.”